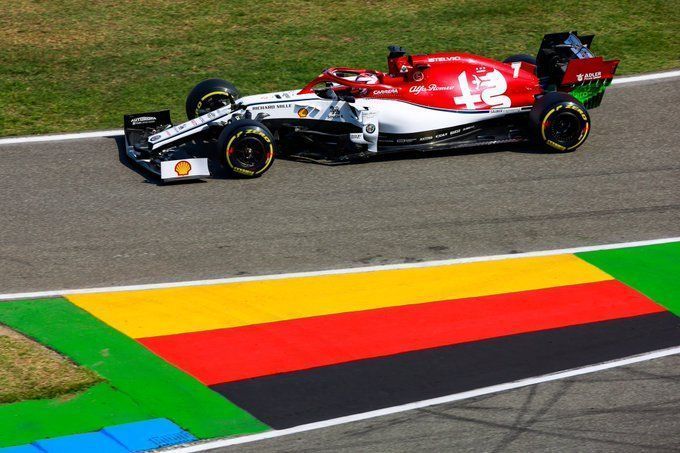 The midfield battle was tight as usual in F1 German GP qualifying as Kimi Raikkonen and Romain Grosjean are not celebrating their good run, while Daniel Ricciardo and Lando Norris take blame for their positions.

With the Ferrari drivers out of the game, it opened up the place from fifth to 10th in the Top 10. It was Alfa Romeo Racing’s Raikkonen, who stepped up to take fifth as he was only 0.016s behind Red Bull Racing’s Pierre Gasly, after the latter’s last quick lap time was deleted.

Right behind Raikkonen was Haas’ Grosjean, who managed to get into the Top 10 using the Australian GP spec as teammate Kevin Magnussen missed out in 12th due to a lock-up on his final run. Among others, McLaren’s Carlos Sainz slotted in seventh, Racing Point’s Sergio Perez eighth and Renault’s Nico Hulkenberg ninth.

Despite the solid qualifying run, Raikkonen and Grosjean are not taking others lightly, especially due to the race pace troubles they have had before. While the former still has managed to hold on but the latter has struggled overall as Haas are clueless about their issues with the tyres.

“Qualifying in fifth makes me happy but it’s only qualifying,” said Raikkonen. “We made a few gains through other people’s misfortunes, but in the end we still had to put in the laps when it counted and we did. The car has been pretty good and I think we could have been a bit faster in Q3.

“Maybe fourth place was within reach, but that’s racing. It’s very difficult to read into our race pace from Friday as the conditions have changed a lot and could be even different on Sunday. We have to see if the rain comes and figure out the weather the best we can.

“It will be hard to race against the big teams; we’ll just take qualifying’s result as it is, give everything in the race and see where we end up.” His teammate Antonio Giovinazzi missed on a Q3 spot by just 0.010s with Magnussen missing by just 0.013s margin, when Grosjean made it in.

The Frenchman remains cautious even more with regards to their race pace and the set-up he is using. “I think from Friday to FP3, Kevin was very happy with the new package, there’s some good understanding of the upgrades here,” said Grosjean.

“Obviously, with track temperatures coming up a bit in qualifying, I was happier with my car. You always want to be on top of the midfield, but today the Alfa Romeo was just too strong for us – it’s super tight in the midfield, which is exciting. Who knows what will happen in the race, we’ll do our best.

“Sometimes this year we’ve had good qualifying sessions followed by tough races. Hopefully this isn’t one of those and we can hang in there with some good race pace. In the practice sessions we were happy, and the cooler temperatures should help us in the race.”

On the other side, Renault’s Ricciardo was disappointed with his missed chance as he ended up 13th but only 0.033s behind Perez for a spot in the Top 10. The Australian said a mistake at Turn 12 derailed his chances. “It’s frustrating to be the wrong side in Q2, but it was incredibly tight out there,” he said.

“We were the last ones in the 12.7s and less than half a tenth would have put me eighth and through. In that regard, the midfield is enjoyable as it’s so close. On my side, I have to take accountability for that as I know I could have done a little bit more, especially at Turn 12.

“We made a good improvement from FP3 so it was pleasing to be so close to the Top 10. Sunday could be nice if it rains. Even if it’s dry, we’ll be alright. It’s a mixed field ahead of us, but for now, we’ll take it on the chin and figure it out.”

It was a similar story for McLaren’s Norris who missed on a Q2 spot and with him also Toro Rosso’s Alexander Albon, who was stuck behind him on his quick lap. “I’m obviously disappointed,” he said. “It’s the first time I’ve missed out on Q2 – frustrated because of that.

“I am also annoyed because it’s not giving me a very good starting position for the race. “There was more potential in the car as Carlos showed by getting into Q3. I just didn’t hook the lap up in Q1 when it mattered. I’ll just have to make up for it in the race.”

Elsewhere, the Racing Point duo made it into Q2 together for the first time but Lance Stroll’s few slides on his quick lap hampered his chances in Q3 when Perez just scrapped in. It will be tight fight in German GP as every midfield team are in with a chance of a point.