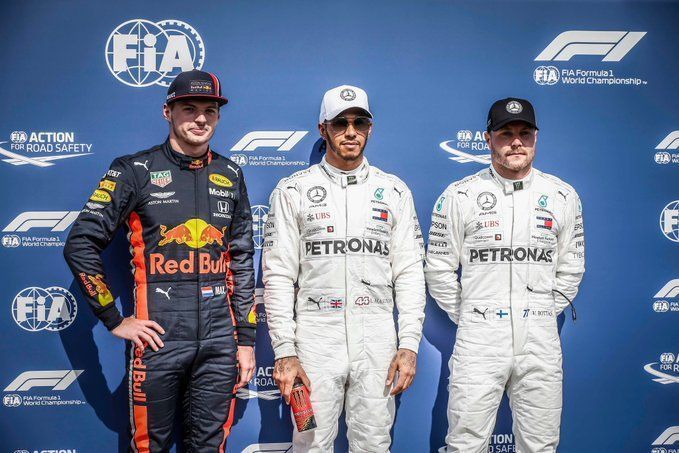 The F1 German GP qualifying turned out to be a one-team show after disaster struck Ferrari drivers Sebastian Vettel and Charles Leclerc as Mercedes’ Lewis Hamilton had pole.

It turned sour for Ferrari in F1 German GP qualifying at Hockenheim when both their drivers Vettel and Leclerc suffered mechanical gremlins in Q1 and Q3 respectively as their challenge ended up even before they can do something, as Mercedes eased in via Hamilton to claim pole position.

In fact, it was scrappy for even Hamilton, who revealed that he wasn’t feeling fine on Saturday and could have missed qualifying if things didn’t look good. He was suffering from sore throat as they had the idea of putting the second driver in the car, in case Hamilton pulled out from the weekend.

It was likely to be Esteban Ocon, who was working late on Friday on the simulator and only reached Hockenheim on Saturday morning, while their regular simulator driver Esteban Guiterrez was present too. Fortunately, they weren’t required as Hamilton took the track and to his good luck, he had pole too.

“I wasn’t feeling good this morning with a bit of a sore throat,” said Hamilton. “We just prepped, just in case I wasn’t going to be able to do the session. I did the practice and we were prepared to be able to put the second driver in, worst case scenario. I got through it good.

“Apart from it, it was a relatively straightforward session. It was very clean, the team did a great job in terms of timings and getting us out at the right times. As we saw both Ferraris dropped out, that made it a little bit different in terms of the battle that we had at the end.

“Nonetheless, I think I had pretty good pace. I think maybe it would have been close between myself and Leclerc, who knows. They were pretty quick all weekend. But I was really-really happy with the laps I had done, particularly from Q2 onwards.”

Hamilton is cautious about the grand prix though with the weather condition still not clear. With no Ferrari around him, it will be Red Bull Racing’s Max Verstappen and Valtteri Bottas as his biggest threat – both of whom haven’t looked ominous to dismantle Hamilton, but we wait to see.

For the Finn, it was strange to be only third as he never looked comfortable as he said he struggled with the brakes. “We got a little bit lucky with the Ferraris, so who knows how quick they could have been in Q3 but myself, I did feel OK in FP3, there were no worries really,” said Bottas.

“It felt like qualifying should be fun and interesting but all through the quali I struggled on the brakes quite a lot, in Turn 2 especially and then Turn 6, Turn 8 – all the big brakings. In Turn 2, I was locking-up many times and went straight, so, just the confidence under braking.

“The bite of the brakes was varying from one lap to another. So, that made it difficult and I felt that was maybe two or three tenths I could have improved in Q3 by getting everything spot on – but not more than that. So, yeah, it was not the easiest qualifying and keen to have a look why.”

Moving on to Ferrari, the team said the issue with Vettel, who couldn’t even do a lap in Q1, was related to airflow in the turbo, while Leclerc, who reached Q3, had troubles with the control system for the fuel pump – both of which couldn’t be solved on time as Mattia Binotto took the blame.

It is a hard pill to swallow considering the pace they showed. “At the moment the entire team is bitterly disappointed,” said Binotto. “We feel especially sorry for our drivers who were in with the chance of doing something special for the people back in the factory who are working so hard and for all our fans.

“We are now carrying out an in-depth analysis of what happened. What we do know is that they were two completely different problems, neither of which had ever occurred before. The first indications from Sebastian’s car lead us to believe it could be related to a component on the intercooler.

“The component is to the same specification as those used previously and it was fitted new. Charles had a problem with the fuel pump control unit. We have shown this weekend that our race pace is good, which makes it even more frustrating that we were not able to show what we could do in qualifying.

“We are angry with ourselves and I myself feel responsible for what has happened. But I am also aware that we must react calmly and do our best tomorrow. That’s what we’re here to do.” The drivers, naturally, were let down but pinned hope on a fight back on Sunday.

“I was looking forward to having fun this afternoon, as the car has been really competitive all weekend,” said Vettel. “So what happened is definitely a great shame. I had a good feeling from the car yesterday and it was even better this morning.

“We had a chance to start from first place, but now we start from last. Of course it is bitterly disappointing, especially that this should happen here at my home race, in front of such a large crowd of fans. It could not have happened at a worse time.

“As for the problem itself, I had no warning that anything was wrong and as I exited the pits, I just lost power. But I am still looking forward to the race and I will try my best to make up as many places as possible, in the hope of at least bringing home some points.”

At the same time, Leclerc added: “It’s a shame for us to have finished qualifying this way. The weekend was going well up to that point and the car felt really good throughout. Sometimes, these things just happen. It is difficult for a team to miss an opportunity with one car.

“But when it happens with both it is even harder to take. I will start the race with a positive mindset tomorrow and will fight to gain as many positions as possible, especially in the beginning. I have confidence in our pace and nothing is over until we see the chequered flag.”