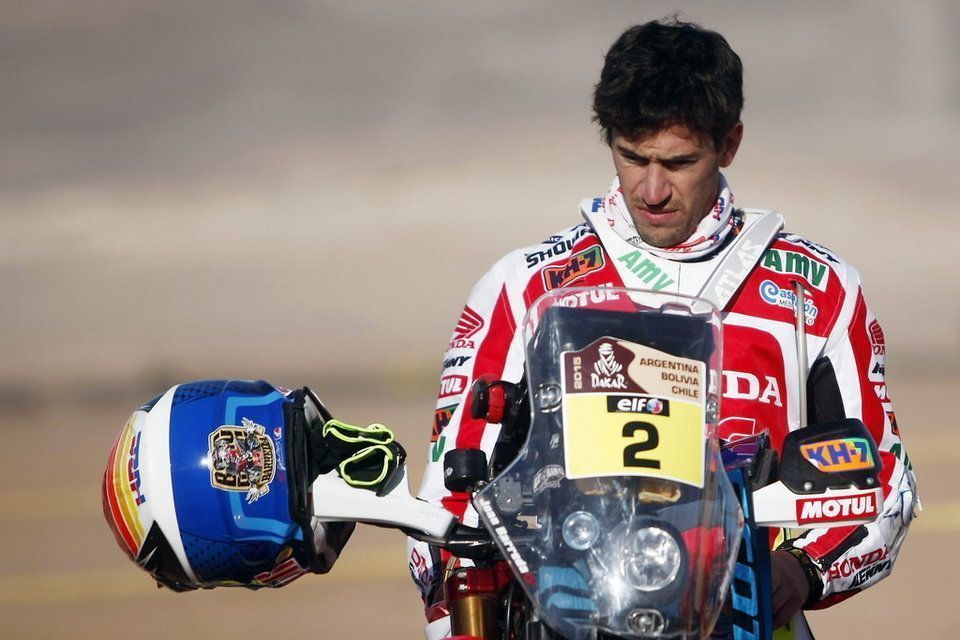 Although he was unlucky on his first two participations on the Dakar, fortune today smiled on Pablo Quintanilla. The Chilean won his first special stage and climbs onto the provisional podium in the general standings, a classification dominated by Marc Coma, who boasts a solid lead on his favourite rally and who is more than ever the favourite to succeed himself.

Pablo Quintanilla’s career probably changed dimension today between Uyuni and Iquique. From a quick and consistent outsider since the start of the rally, the Chilean has taken on the status of stage winner and pretender for final victory on the Dakar. This change owes nothing to chance given the KTM rider’s steady improvement over the last several days and the return of the rally to his home country was an opportunity that Quintanilla could not pass up. However, for the start of the final sprint over 38 km after an eventful first part of the special on the salt lake in Uyuni, shortened due to the weather conditions, Stefan Svitko and Juan Pedrero appeared to be better placed to experience glory. Separated by one second, the two men finally saw victory escape them in the final dunes, to the benefit of the third placed rider in the general standings.

However, they should console themselves with finishing in such high places on a stage which was fatal for the ambitions of several favourites. With the exits from the race of Alessandro Botturi, Michael Metge, Daniel Gouet and Jordi Viladoms, four members of the top 20 said goodbye to the rally. The top 6 has again been shaken up by the nightmare days experienced by Joan Barreda (towed over most of the stage by Israel Esquerre) and Helder Rodrigues. The two Honda riders lost more than three hours and kissed goodbye to their dreams of victory in Buenos Aires. This was a godsend for Marc Coma who, with his characteristic experience and intelligence, did not tempt fate and made sure he got to Iquique with a 9th placed finish. The day’s top 10 also plays host to the solid Toby Price, the incredible Laia Sanz (5th today), who enjoyed her best performance on the Dakar, getting closer and closer to the first stage victory by a lady rider, as well as Xavier De Soultrait who confirmed his medium term ambitions with his best performance so far in Iquique (6th).