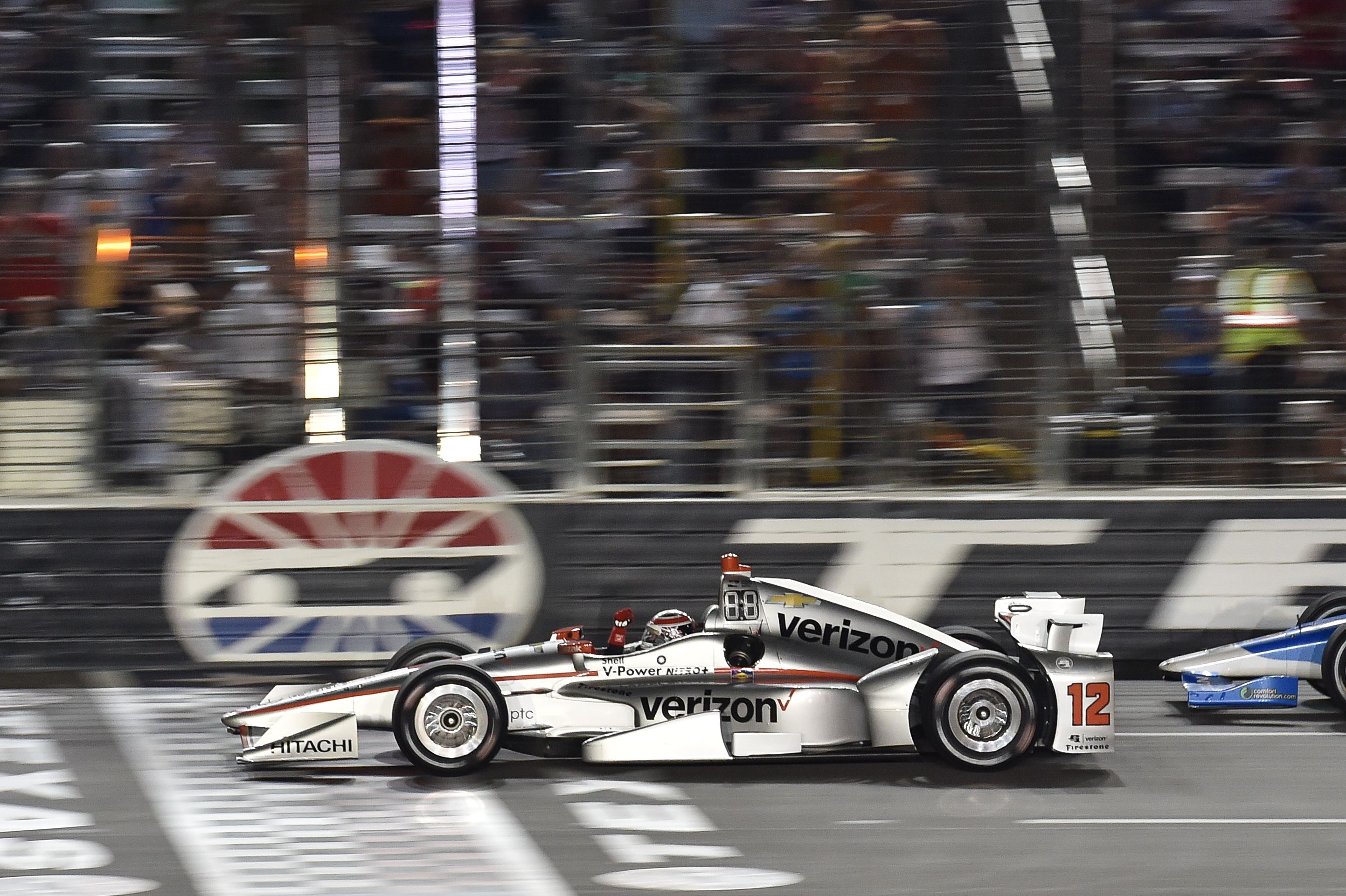 Will Power survived a Wild West night of racing at Texas Motor Speedway to win the Rainguard Water Sealers 600 and join a pair of greats on the all-time Indy car victory list.

The Team Penske driver won the incident-filled race on the 1.5-mile oval, taking the checkered flag in the No. 12 Verizon Chevrolet under caution ahead of second-place Tony Kanaan in the No. 10 NTT Data Honda from Chip Ganassi Racing.

The victory is the 31st in Indy cars for the 36-year-old Australian, tying him with Dario Franchitti and Paul Tracy for ninth all time. It is also his second win this season and second at Texas Motor Speedway.

The frenetic Verizon IndyCar Series race featured 23 lead changes among seven drivers, though Power led a race-high 180 of the 248 laps. He won under the last of nine caution periods after four cars – including Takuma Sato and Scott Dixon battling for second place right behind Power – were involved in a crash in Turn 1 on Lap 244.

Power’s win is the ninth at Texas Motor Speedway for Team Penske and the legendary team’s record 191st victory in Indy car history.

Kanaan finished second despite being levied a 20-second stop-and-hold penalty after being involved in the largest incident of the race. On Lap 152, Kanaan, Hinchcliffe and Mikhail Aleshin went three wide into Turn 3. The cars of Kanaan and Hinchcliffe touched, ricocheting Hinchcliffe into Aleshin and triggering a mishap involving nine cars. No one was injured.

The race was red-flagged for 30 minutes while the Holmatro Safety Team and track workers cleaned up debris. When the race was restarted, Kanaan went down two laps after serving the penalty, but clawed his way back onto the lead lap to secure a season-best second-place finish and his fourth podium showing in the past five Texas races.

For the final 90 laps of the race, INDYCAR mandated competition cautions after every 30 green-flag laps so teams could change tires to account for abnormal tire wear on some entries, due in part to the newly repaved track surface.

Dixon retained the Verizon IndyCar Series championship lead despite finishing ninth after being collected by the spinning Sato on Lap 244. The Chip Ganassi Racing driver sits atop the standings after nine of 17 races with 326 points. Simon Pagenaud, who finished third in the race, is second with 313 points, Sato is third at 312, Helio Castroneves fourth with 305 and Power fifth at 286.

The next Verizon IndyCar Series race is the KOHLER Grand Prix at Road America on June 25.