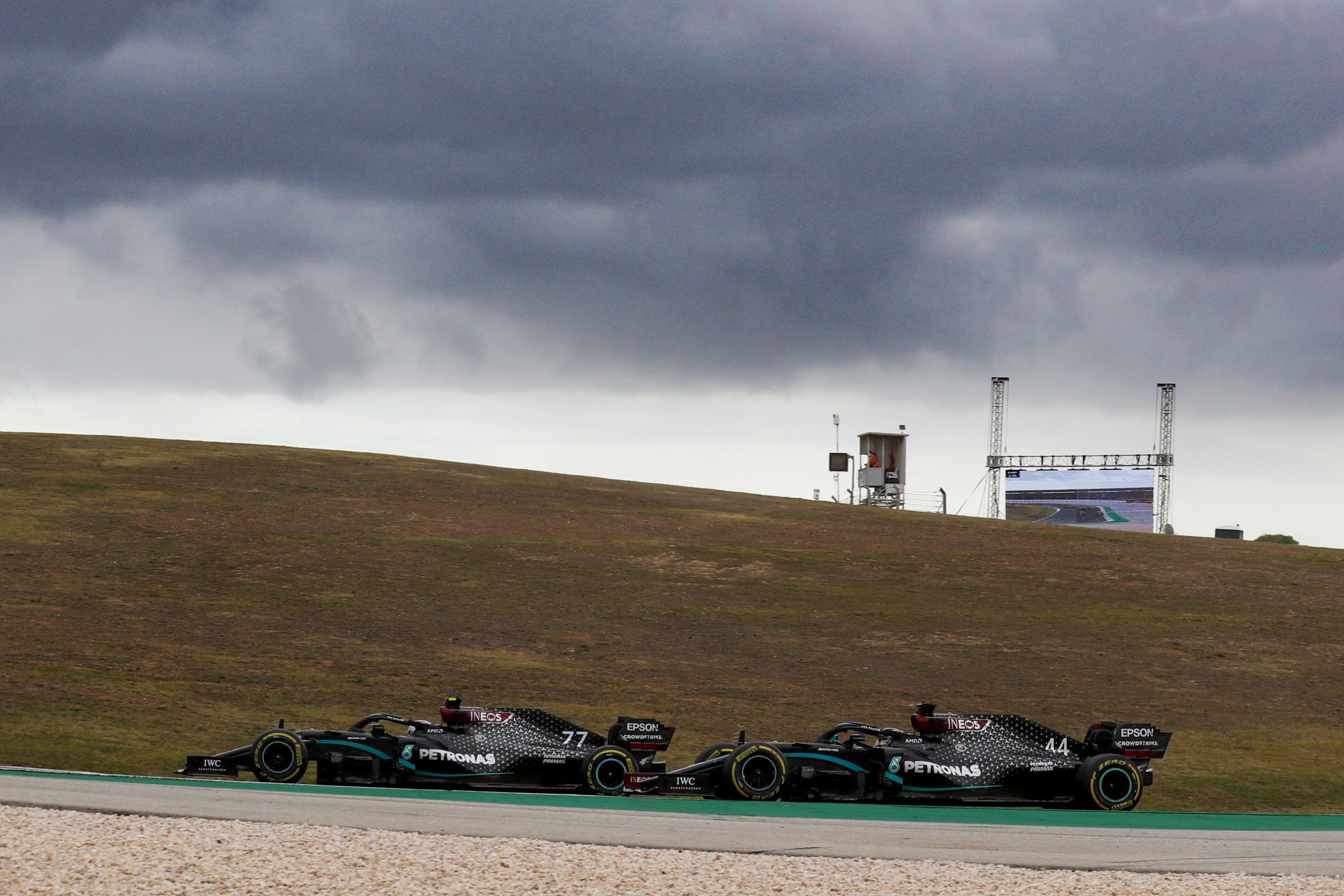 It was a twitchy start to F1 Portuguese GP at Algarve as Mercedes’ Lewis Hamilton led the way from Valtteri Bottas but not for long as the Finn fought his way to take the lead, while Red Bull Racing’s Max Verstappen had a tangle with Racing Point’s Sergio Perez.

With rain falling, it was difficult for everyone to keep the car straight as Mclaren’s Carlos Sainz made the most of the situation to come through the field and pass Verstappen, Hamilton and even Bottas to lead the Portuguese GP for few laps.

Another big mover was McLaren’s Lando Norris in fourth ahead of Verstappen, while Alfa Romeo Racing’s Kimi Raikkonen moved up inside the Top 6 when others were struggling. Renault’s Daniel Ricciardo was seventh with Ferrari’s Charles Leclerc in eighth.

AlphaTauri’s Pierre Gasly stationed in ninth from Racing Point’s Lance Stroll as Renault’s Esteban Ocon and Red Bull’s Alexander Albon were outside the Top 10, the latter losing out big. Meanwhile, at the front, Sainz couldn’t hold on for long.

Bottas passed him soon, followed by Hamilton and Verstappen – even though the latter was struggling with tyres. The Dutchman was, though, relieved that there was no investigation necessary for his incident with Perez at the start of the grand prix.

The Mexican was spun around and forced to pit. With the Top 3 settled, Leclerc on the medium tyres moved up slowly to be fourth as Sainz came under pressure from Gasly, who looked solid after passing Raikkonen and Norris on the road.

The Brit started to come under pressure from Stroll, who looked solid as well despite having shown the black and white flag for track limits as warning. Having lost to Albon early on, Ocon was back in front of the Thai racer at the fag end of the Top 10.

His teammate Ricciardo pitted early on to drop to the back of the grid as he started to struggle early on. After his heroics at the start, Raikkonen dropped out of the Top 10 points position and eventually pitted to switch onto the medium tyres.

The fight between Norris and Stroll turned into disaster for both at Turn 1 as the Canadian tried a move around the outside into the right-hander but collided with the Brit. Both had front wing damage with the Racing Point driver spun around.

The incident was put under investigation with both forced to pit. At the same time, Hamilton closed in on Bottas and took the F1 Portuguese GP lead to pull up a solid gap to the Finn, whereas Verstappen steadied in third from Leclerc.

Gasly passed Sainz for fifth after their fight as Ocon was seventh from Ferrari’s Sebastian Vettel after Albon pitted for the medium tyres. The Top 10 was then rounded out by Williams’ George Russell and Alfa Romeo’s Antonio Giovinazzi.

The day for Racing Point turned worst as Stroll was handed a five seconds penalty for causing a collision – which the team thought was harsh. But they were on a salvage job with Perez fighting his way back into the points after the Lap 1 tangle.

Stroll had more misery still with another five seconds penalty for track limits, as Haas’ Romain Grosjean was warned for black and white flag too. Teammate Perez was on the charge after his early drop as he fought well with Ocon for fifth place.

The two went wheel-to-wheel for couple of corners but Perez had better pace to take the place. The fight happened just after another wheel-to-wheel tussle between Raikkonen and Sainz for 10th place as the dup did not give any inch to each other.

The Finn did well but had to give up to Sainz, as he then came under pressure from Albon. Meanwhile, at the front, Bottas wanted to do the opposite of Hamilton in terms of tyre strategy but Mercedes still put them both on the hard tyres after their pit stop.

It was then Hamilton leading Bottas in F1 Portuguese GP with Verstappen third with Leclerc and Perez in the Top 10. Ocon was sixth without a stop as Ricciardo was seventh, Gasly eighth, Sainz ninth and Raikkonen rounding the Top 10.

The Finn managed to keep Albon at bay for long. The Thai, though, chose to pit for the second time like Perez as they dropped to 12th and sixth respectively. The fight behind the Mexican settled down with Gasly in seventh and Sainz eighth.

Ricciardo in eighth started to come under pressure from Raikkonen and Vettel in the Top 10 but before the Finn could press the Australian, he was passed by the German for ninth. Just ahead, Ocon finally pitted after 54 laps and returned to the track in eighth.

He had Perez, Gasly and Sainz in sights to overtake in 10 laps as Ricciardo was left to fend off from Vettel. The track limits warning started to show up as both Williams’ Nicholas Latifi and Norris were latest to be shown the black and white flag.

Before that, Grosjean and AlpaTauri’s Daniil Kvyat were handed a five second penalty for track limits as Racing Point decided to retire Stroll from F1 Portuguese GP. At the front, it was easy in the end for Hamilton to win the Portuguese GP at Algarve.

He won from Bottas by 25.592s as he eventually broke the record of Michael Schumacher’s 91 F1 race victories with his 92nd win as Verstappen rounded out the Top 3 from a Leclerc, while Gasly fought his way through to end up inside the Top 5.

It was not easy for Gasly as he had to fight off Perez at Turn 1. The move from the Mexican was put under investigation for moving across the racing line where they almost collided. He lost another place to Sainz to end up seventh eventually.

Ocon could not make up positions as he finished eighth from Ricciardo, while Vettel rounded out the Top 10 position. Raikkonen did well in 11th as Albon was a sorry 12th despite making up about 15 seconds after his second stop.

UPDATE: As we saw all Portuguese GP weekend long, there were more lap deletions at Turn 1 and Turn 4 in the race as the former saw 23 offences and latter having 14 in all.

Meanwhile, for the incident between Perez and Gasly, the FIA Steward handed a reprimand to the Mexican, which is his second of the season. The drivers agreed it was racing to the limit but the stewards felt that it was slightly beyond that limit.

It could have ended up in a potential disaster as it was too close in the end. The statement stated: “The Stewards determined that on lap 64 of the race at the end of the main straight, Perez moved in defence at the exact same time that Gasly who was overtaking to the right having slipstreamed Perez down the straight.

“Gasly’s move was made before the braking zone and was entirely reasonable. As Gasly was moving to the right with significantly greater speed, Perez moved to the right and then continued to move in front of Gasly for a significant portion of the track but stopped having left a car width to the inside. The Stewards noted that earlier this year, the drivers discussed “late movement in reaction” moves and agreed that they were potentially very dangerous.

“The Stewards considered that this move was at the fastest portion of the track, but also noted that Perez did not move in reaction, but rather moved first or simultaneously. Further he is entitled to make a single defensive move, but such a move cannot constitute a danger to another driver. In the hearing, both drivers agreed that while on the limit, this manoeuvre was fundamentally okay and constituted racing at the limit.

“The Stewards however, believe that this was too close to that limit and that Perez had not sufficiently accounted for the speed differential. In selecting a penalty, the Stewards have taken into account the views of the drivers involved and ordered a Reprimand (Driving.)”

As for the other incidents, Kvyat was let off for ignoring the blue flags when Bottas exited the pits with no grip at all. The onboard showed that the Russian let the Finn by after he was back up to speed on the hard compound tyres.

He got five seconds time penalty like Stroll and Grosjean for track limits, where each of the drivers’ had one penalty point on their superlicense as well. The Russian has five against his name in the 12 months period, the Canadian has three and the Frenchman with one.