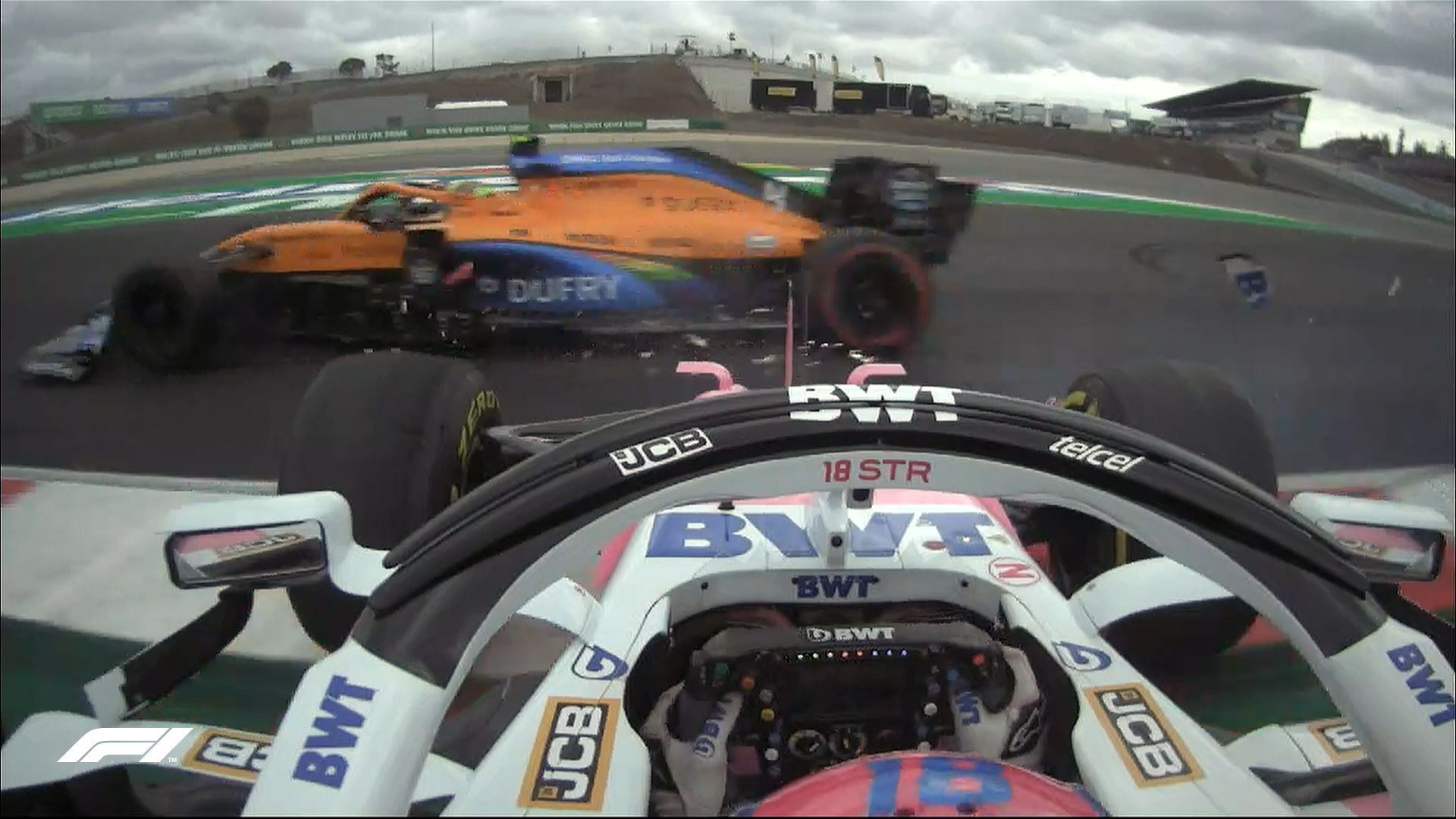 Lando Norris accused Lance Stroll of never learning from mistakes after their clash at the F1 Portuguese GP Sunday was reminiscent of one Stroll was involved in on Friday.

The incident on Friday saw Racing Point’s Stroll, on the outside of Max Verstappen, afford the Dutchman inadequate room to take Turn 1 at the Algarve circuit. The resulting collision sent the Canadian spinning, also risking damage to the Red Bull car.

On Sunday, the second crash involving Stroll, this one also including McLaren’s Norris, was all too similar. The former, fast approaching the latter, took to the kerbs on the outside of the track to attempt a move around the outside of the high-speed right-hander.

However, Stroll once more turned towards the apex too early, tangling with Norris and spinning off of the circuit, while the Briton carried on. Despite its minimal impact on the outcome of his race, the Mclaren was still cross with his adversary.

“I don’t know what he was doing really,” said Norris to TV media. “He went to the left, which I was quite surprised by when he could have very easily could have gone to the inside. I was easily halfway alongside and he just turns in.

“He obviously didn’t learn from Friday, but he doesn’t seem to learn from anything he does. It happens a lot with him so I just need to make sure I stay away next time,” Norris added. The 20-year-old ultimately came 13th in what was his fourth non-points finish of 2020.

Three of his finishes outside of the top ten have come in the past three races. His spirits were raised, though, by a positive start, that saw him sit third as his teammate Carlos Sainz ran first. “It was amazing,” said Norris. “An orange car in first and third.

“It’s quite a sight, to be honest. The Mercedes’ were on the mediums so that was a disadvantage, Leclerc was too, but we still overtook quite a few soft starters. I don’t know what we did. We risked quite a bit more in the opening lap, but we had a really good start.

“We put the car where we had to, took the right risks, but then we struggled a lot with the front graining, and the race started going really bad compared to some people, especially the medium runners. But I don’t know what to say really, we did a good race.

“We struggled in the first stints but so did a lot of other soft starters because of the rain and cooling the front tyres, but we pushed hard, did a lot to try and recover it, but just didn’t have any luck,” Norris added.

Stroll, meanwhile, was rather nonchalant about the whole affair, in spite of the fact that damage and a five second penalty he incurred – both as a result of the collision – ultimately plagued his race. “I made contact with Norris,” said Stroll.

“He was kind of in the middle of the track, I wasn’t sure if he was going to stay on the inside or take the normal line, it was very awkward. I had to make a split-second decision, and I was on the outside on the kerb, and I turned into the corner, and I guess there wasn’t enough room for both of us, so that was that.”

Stroll was also positive about Portimao in spite of the difficult race it dealt him. “Putting aside the result, I really enjoyed the circuit and I would love to see it on the F1 calendar in the future. It was one of those days to forget, so my focus is now entirely on Imola and turning the corner there,” he summed up.

UPDATE: In his post-race radio message, Norris apologised for swearing on Stroll during the time of their incident. “I apologise for what I said about Lance,” he said. “I shouldn’t have said the words I did but just in the moment, I was annoyed, but cheers boys, good work anyways, we tried.”

UPDATE 2: Following the incident and his media interviews, Norris has once again apologised for his actions and statements.

He wrote: “I owe an apology. I’ve been stupid and careless with some things I’ve said lately in media and interviews, and haven’t shown the respect I should have to certain people. I’m not that kind of person, so know I should apologise to them but also everyone reading/listening. Sorry.”

Here’s the video of the incident: https://www.formula1.com/en/video/2020/10/2020_Portuguese_Grand_Prix__Stroll_and_Norris_collide_at_Turn_1.html