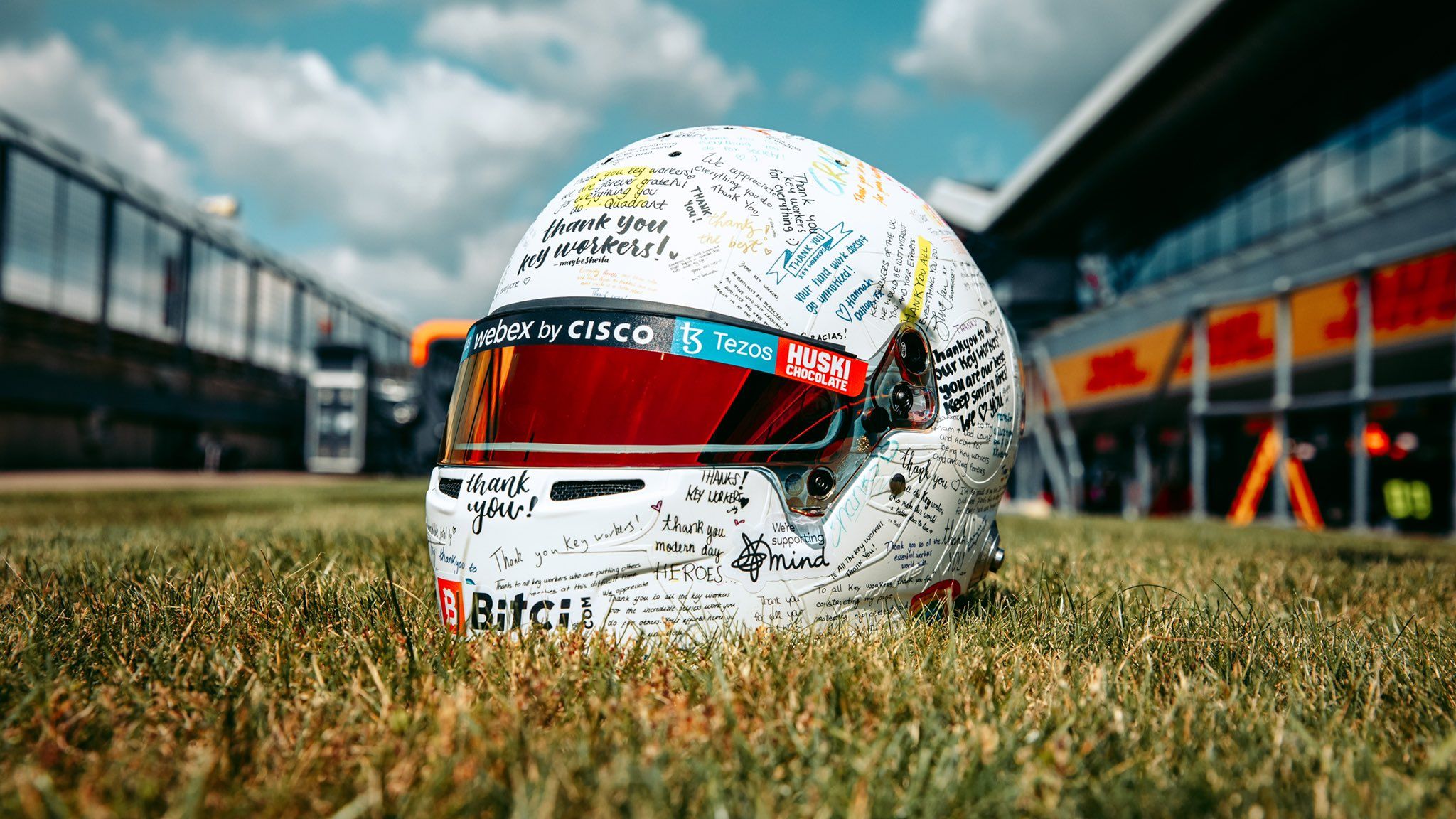 Lando Norris talks about his mental and physical well-being ahead of F1 British GP as he shares a new helmet, while Daniel Ricciardo clueless about 2022 car livestream moment.

Having only gone through a serious scenario few days ago, McLaren’s Norris was back on track to face the media ahead of this weekend’s F1 British GP. The British driver was shaken after being mugged outside Wembley after the UEFA Euros 2020 finale.

Robbers stole his Richard Mille watch, but left a lasting impression, especially mentally, which he is still coping with. Physically, Norris admits he is a bit sore, but being at Silverstone and driving the car on Friday, he reckons it will be fine eventually.

“I’ve been better, I can say that,” said Norris in press conference. “I’m not in perfect condition, I’m not going to lie, some work to do mentally. Of course I talk about that a lot, mental health. Mental strength is very important. I’ve not been sleeping that great and so on. So it’s not ideal and I’m feeling a bit a sore. I’ll work on it.

“I’ll make sure I’m feeling better and I’m in the best shape possible. I feel like I can still go out and focus on the job I need to do, so that’s the main thing. I think one of the best things has been being able to come to Silverstone and get my mind off it and focus on a different job. I’m sure I’ll be alright tomorrow.

“Already the fans here have been pretty awesome. I did some laps earlier in a car and the grandstands were already full, like on the start-finish straight, chanting and so on, so it was nice to get that feeling back – we’ve missed that for such a long time,” summed up Norris, who unveiled another special helmet for the British GP.

Last year, he surprised a kid with her hand-drawn helmet on a white background. He’s bring that white background helmet back, but this time it is filled with ‘thank you’ messages he asked his fans to write for the front-line workers in pandemic.

It has wide variety of messages all around the helmet from as many fans as possible. Here’s some of the photos:

From us, to you: Thanks Key Workers ❤️ pic.twitter.com/28k9aobZwP

Amid the good gesture of Norris, his McLaren F1 teammate Ricciardo found himself in a pickle at the launch of the 2022 F1 car. The livestream on Youtube had their mic left open during the countdown for a brief of time, which was enough for fans to capture a moment.

There were no pictures and so it was not clear what Ricciardo was pointing at, but he stated, ‘yeah, no it’s terrible. It’s shit, it’s worse’, which most took it as him talking about the model 2022 F1 car that was presented to the public at Silverstone.

In the the video which followed, Ricciardo was quite diplomatic about his first thoughts. “I like the rear of it,” he said. “The rear looks pretty old school, it reminds me of 2008, with that style, which is cool. The front is very different, but like all things, the more you stare at it, the more normal it will start to look.”

When asked about that brief audio in the press conference, Ricciardo was lost about the situation and couldn’t recollect the moment. He became curious about the moment, but clarified that it wasn’t about the 2022 F1 car, because he has no ill thoughts about it.

“I was probably talking about something else because to be honest we were talking about quite a few things,” Ricciardo said. “To be honest I do not recall saying anything like that because I actually thought it was pretty cool. I wouldn’t have been that aggressive to it, maybe it was the paint scheme, but I wouldn’t have said that about it the car.

“I’m actually curious now. Was I standing next to Lando? I don’t swear around Lando because he is still quite young. You have got me there. I will clarify that I definitely didn’t think it was shit. I was actually quite okay with it and I think I mentioned something about liking the rear. Anyway there is no negativity around the new car here,” summed up Ricciardo.

Here’s the 2022 F1 model car with the livestream video

Here’s a pilot drawing for Lando Norris in the sky