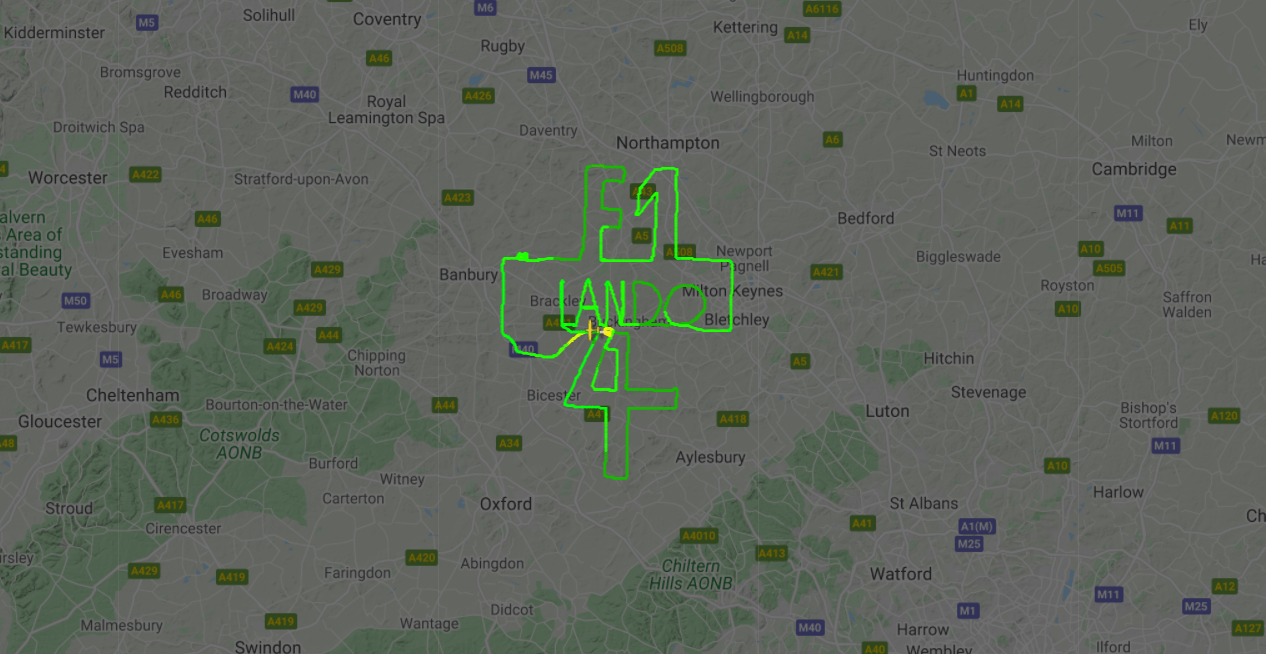 A pilot-cum-F1 fan, Ben, flew over the United Kingdom skies and drew ‘F1 Lando 4’ in support for Norris, as Alpine gives Esteban Ocon a new chassis.

While this doesn’t seem in relation to what happened to Norris over the weekend in Wembley, a pilot-cum-F1 fan, few over the UK skies to draw ‘F1 Lando 4’ in support of the English racer ahead of this weekend’s British GP at Silverstone.

A pilot going by the name ‘benfly79’ on Twitter posted a video via flightradar24 of his work, which was appreciated by McLaren too. He showed his flight plan drawing ‘F1 Lando 4’ via a Tik Tok video, playing the Brian Tyler’s official F1 theme song.

Ben owns a G-OWBA Alpi Pioneer 300 and completed his run of nearly two hours, early on Wednesday (July 14). As per flightradar data, he flew over the Silverstone circuit and covered the Northampton area, which includes Brackley, Banbury, Milton Keynes, etc.

Staying with F1 news, Alpine has confirmed a chassis change for Ocon from British GP onward after the Frenchman requested for maximum changes on his car after a dip in results. The team says they are doing this to remove any doubts.

“Esteban had two difficult races in Austria and we’re still investigating whether there are any technical reasons behind it,” said Marcin Budkowski. “To eradicate any doubt, the team has made the decision to make extensive changes to his car for Silverstone, including a new chassis.

“Esteban performed very strongly at the start of the season and qualified the car on the third row of the grid on merit at two races in a row just a few weekends ago, so we are working together to make sure he bounces back, and this weekend is the perfect opportunity to do that.”

In more F1 news, Aston Martin announced another new hiring with Mark White joining the team as new Operations Director, from September 1, 2021, onward. Coming off from Honda, he will look after Production Control, Quality Assurance and Manufacturing.

With this, the Production Department will see Bob Halliwell take up the position of Chief Operating Officer [previously Production Director], where White will report to him. “I am hugely proud to be joining the talented men and women at Aston Martin Cognizant Formula One Team this September,” he said.

“I have been extremely impressed by the passion and desire of the leadership team, and I believe the roadmap ahead, including the new factory build, will allow the team to be truly competitive in the years to come. I will do all I can to contribute towards the team’s journey to the front of the grid.”

At the same time, Otmar Szafnauer added: “Mark White’s arrival at Aston Martin Cognizant Formula One Team will be a key appointment and add valuable expertise to our factory operations.  Mark’s experience of the automotive world will be especially relevant as the cost cap comes into force with greater emphasis on containing manufacturing expenses.

“He will also continue our push to improve quality and efficiency in our production and manufacturing systems. It is yet another demonstration of our desire to strengthen the team in all areas with another experienced senior leader.”