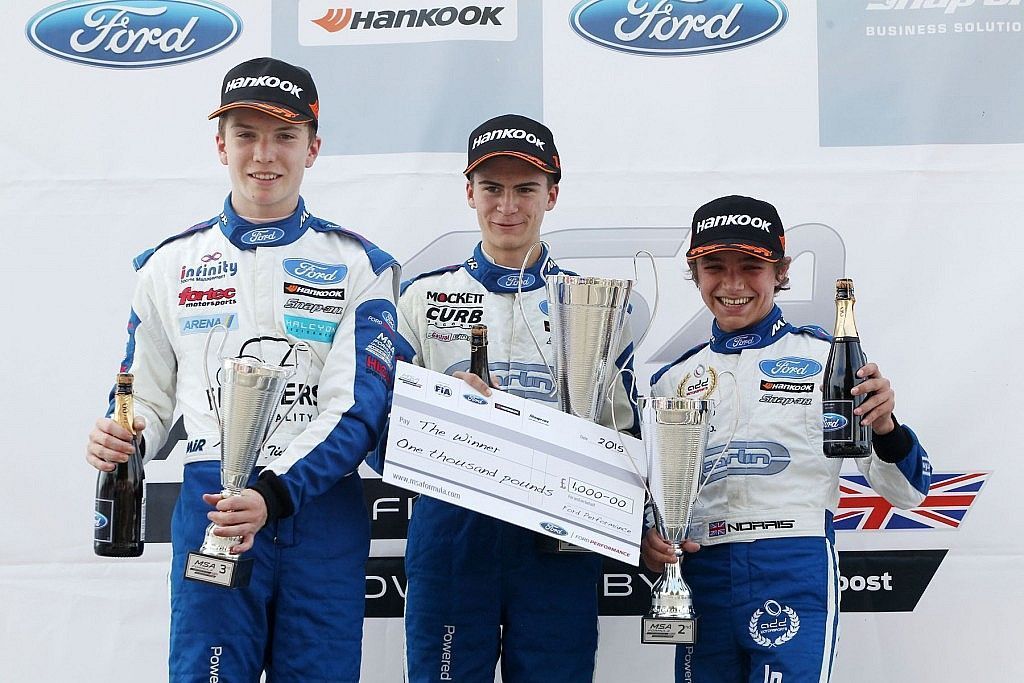 In their reunion race in iRacing IndyCar Challenge, Lando Norris and Colton Herta reminisced about old competition and expressed their excitement to once again compete each other.

Given their similar ages, Andretti Autosport’s Herta and McLaren’s Norris have crossed paths in the past before their iRacing IndyCar Challenge reunion. Specifically in the 2015 season, when they were teammates at Carlin in British Formula 4.

Since then, their careers have diverged, as Herta opted to take the IndyCar route after the 2016 season in Euroformula Open, and Norris continued racing lower formulae in the European sector where he won in F3, on his way to F1.

The duo, though – who got along well back in their F4 days – got a rare chance to reunite on-track, with Norris competing in last weekend’s iRacing IndyCar Challenge at the Circuit of the Americas, with the Brit racing for Arrow McLaren SP.

With his substantial iRacing experience, Norris clinched the win in the virtual event, and while Herta, who – it’s worth noting – is new to the gaming scene, was somewhat off the pace, the reunion was enjoyed by both parties, who reminisced about the old days when talking to media – including FormulaRapida.net, in a virtual press conference.

“From my side of it, I was excited,” started Norris. “I’ve seen Colton racing. It’s been a while since he raced in F4 back in the day. We had some really good times. We have a lot of respect for each other. I think Colton is a year younger than me.

“When he went into F4, he was I think the youngest guy in the field. I don’t know, I don’t want to sound like I’m talking like a guy with loads of experience, but looks like he’s matured in quite a way as I think I have in some ways.

“It looks like he’s become an even better driver than what he was, and he was freaking fast when I was racing against him. He was nicknamed Hooligan Herta for many reasons. The racing we had was good fun. I’ve missed Colton.

“We had a lot of great laughs back in 2015 and 2016 as well I think. It was a good time growing up. We were both immature back then, whatever we were, 14 years old, very young. It was just good fun. He made mistakes here and there, but he was very fast when he put a lap together.

“He really made me a better driver, to push myself a lot more. Seeing him go out to America and do IndyCar, winning COTA, pretty sure he was the youngest ever driver to win, I wasn’t surprised by what he did. It was pretty cool to see. I was really happy for him.

“To be able to race against him now, to be racing in some ways against him was good fun. He even sent me this little message, which I will happily read out: ‘I’m just going to say if you try to lap me I’ll take you out, fair warning.’

“That was his little text to me before the race. So when I was ahead of him under the caution, I was actually getting quite worried that he was going to do something stupid and send a dive on me into turn one or something,” summed up Norris.

Meanwhile, Herta talked about the reuniting in a similar light: “I think it’s awesome. Obviously have a lot of respect for Norris, got to race against him for a year in British F4, then did some testing with him through Formula 3 and stuff.

“Have a lot of respect for him. It’s cool to see all these guys that are interested in running INDYCAR and have the chance now virtually to do it. It is really cool to be able to race against Norris again [in the future] and so looking forward to it.”