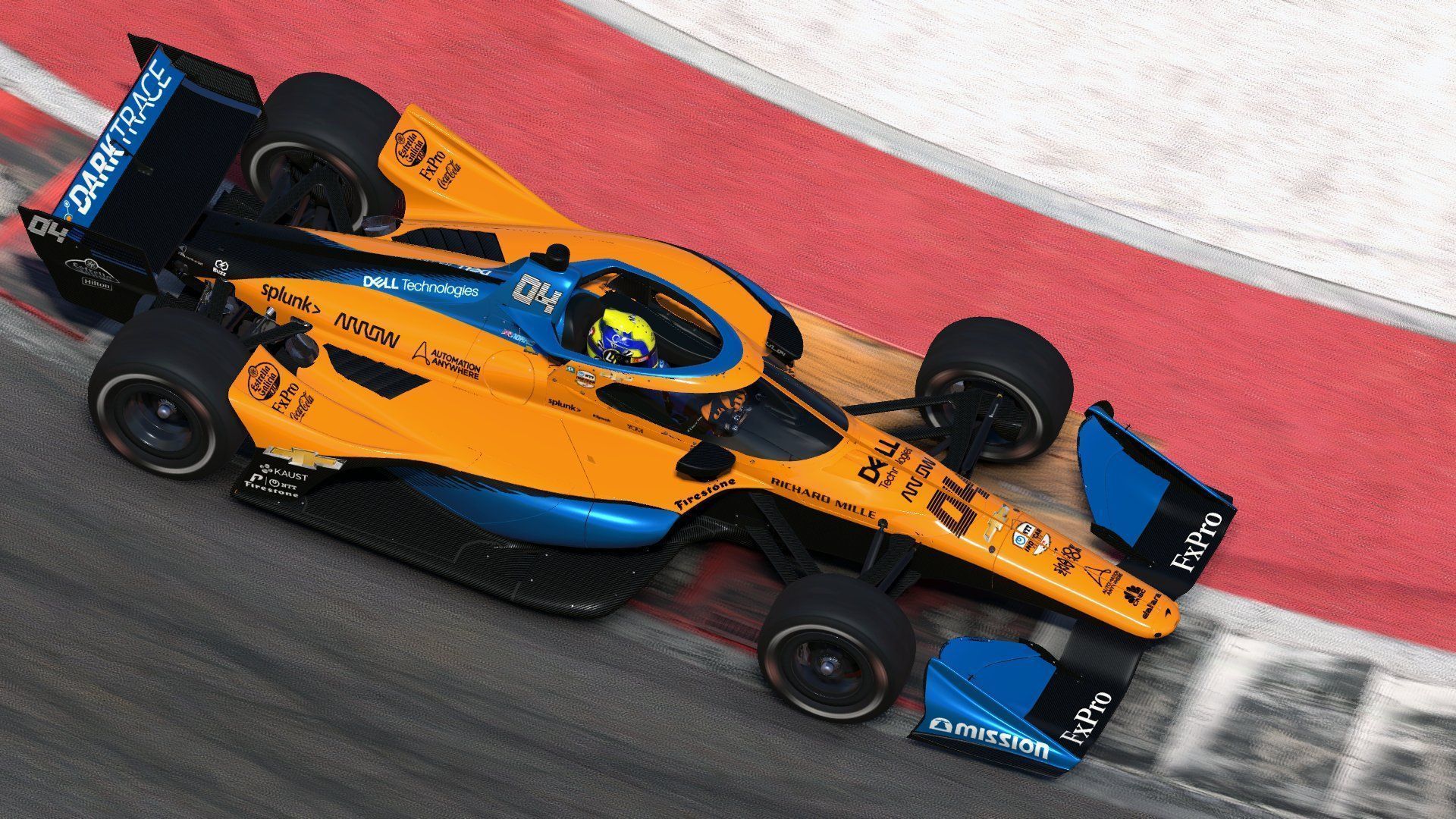 Lando Norris made it a Arrow McLaren SP 1-2 with Patricio O’Ward in iRacing IndyCar Challenge at Circuit of the Americas on debut.

In the penultimate round of the iRacing IndyCar Challenge at the Circuit of the Americas, there was yet another strong entry list with 33 drivers, which included F1 racer Norris, who started on pole in his Arrow McLaren SP #4 Chevrolet car.

While it was clean at the front, the mid-pack had an incident where Arrow McLaren SP’s Robert Wickens and Oliver Askew was involved, as well as Andretti’s Zach Veach, with contact between the three in the first turn on one of the early laps.

Quickly, Norris build up a strong lead with his 14 years of iRacing experience, but on the lap prior to the competition caution, he pitted so as to limit damage that a pit stop would have. Contrasting this, Power opted to stay out in an effort to beat on strategy via overcut.

On the 15th lap, the caution ended, and this time it was Power who led into the first turn, while Norris – having pitted – was stuck in traffic, and on the 16th lap, he spun, which gave the advantage to Power, before he, too, spun twice on the 18th lap, and handed the lead to O’Ward.

With CGR’s Felix Rosenqvist having stopped, the top three was O’Ward, DCR’s Alex Palou, and Penske’s Scott McLaughlin, but the Spaniard also spun, granting the third position to Norris, who dispatched the Supercars driver quickly, and thus moved up to second, not long before the Kiwi pitted.

With eight laps to go, Norris pitted, and came out behind CGR’s Rosenqvist – who had previously come in for his second stop. And, while Palou and O’Ward were in first and second, it became clear that the battle between Norris and the Swede was the fight for the provisional lead. This was confirmed later, after the Spaniard and Mexican pitted.

However, as Norris chased Rosenqvist, the Swede spun and relinquished the lead to his British opponent. With his momentum lost, the CGR driver lost another position to O’Ward. At this point, the Mexican began his chase after Norris, with significantly more push-to-pass left at his disposal.

However, the extra horsepower available was not enough, and so Norris maintained his lead to ultimately take the win on his iRacing IndyCar Challenge debut. O’Ward maintained his position, for an Arrow McLaren SP 1-2. Rosenqvist returned to the podium for the first time since round one, and Penske’s McLaughlin ended up fourth.

Here’s the video where you can watch the whole race: https://www.youtube.com/watch?v=kW1hvZQM4-0