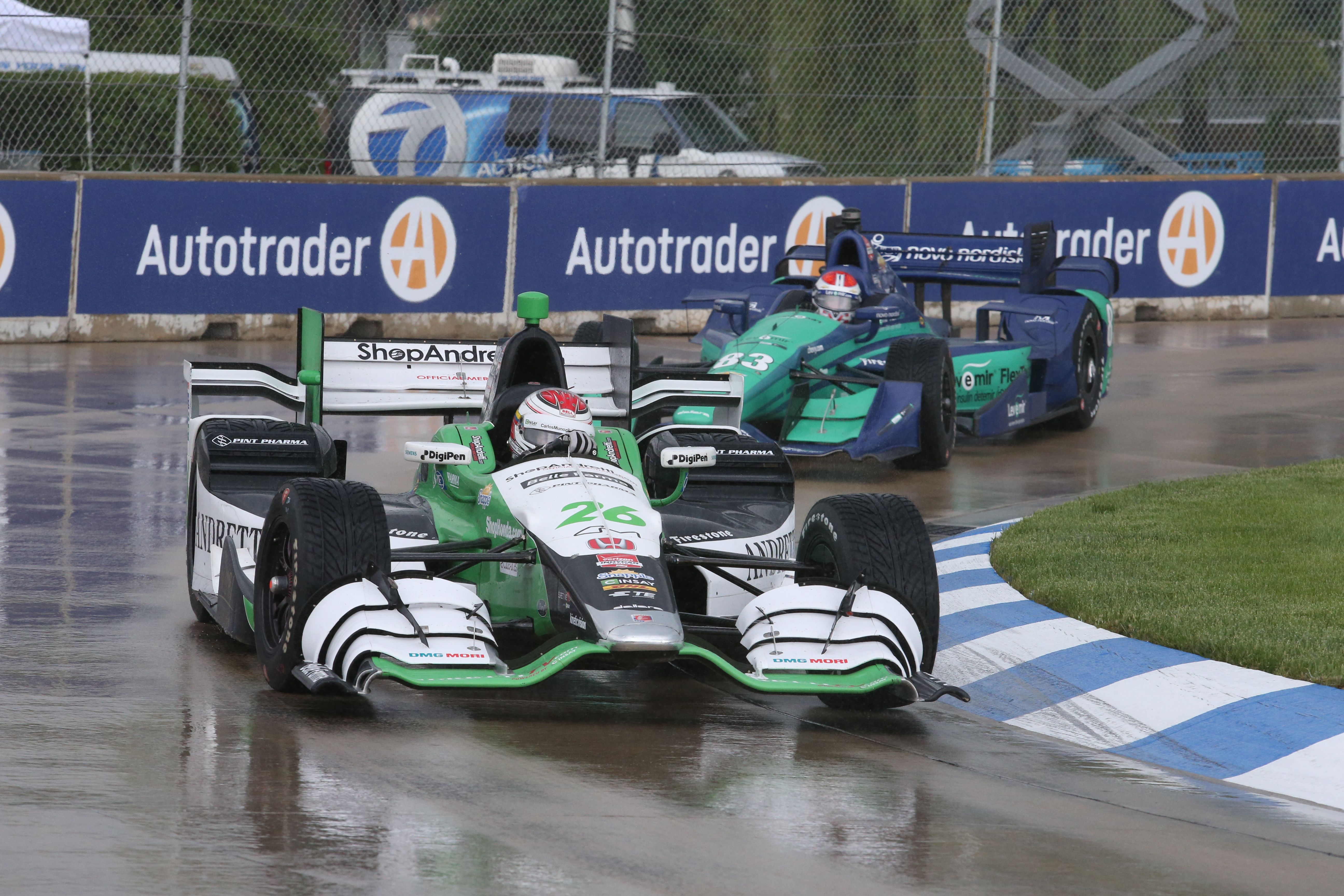 Carlos Muñoz has been the best driver in race that had everything to become one of those that we will remember for so long. The Colombian takes his first ever victory in IndyCar Series. Marco Andretti achieves his first podium of the season after dominate the race, as he helps to make a one-two for Andretti Autosport. Simon Pagenaud finished on the last spot of the podium.

The first race of the unique double header this season that celebrates in Detroit started with a Penkse Top 3 under the pace car. Power started first followed by his teammates, Castroneves and Montoya, behind them the always dangerous Takuma Sato. The race has started in a one car row due to safety requirements.

In the start, Takuma Sato (A.J. Foyt Enterprises) was really aggressive and managed to overtake the three Penske to take the lead of the race. Meanwhile, Rodolfo González (Dale Coyne Racing) spun and caused the first caution of the race.

The green flag came back at Lap 6, but it was just for some seconds. Stefano Coletti (KV Racing Technology) touch James Jakes (Schmidt Peterson Motorsport), who touch Tony Kanaan (Chip Ganassi Racing), who gave no room to Graham Rahal who crash into “TK” car and had to retire from the race.

The track got dry as the pace car continues in the track, this situation makes Marco Andretti (Andretti Autosport) think about put the black dry tyres, and that’s what he did. Charlie Kimball (Chip Ganssi Racing) did the same but when the green flag returned to the circuit, the American lost the control of his car and crashed into the wall at turn 2, causing another pace car situation.

That pace car situation had been use for all those drivers who didn’t put the dry tyres, to do his pit stop and made Marco Andretti the leader of the race.

The drivers that stopped before where up front, Sato was the first of those who stopped later, and he pushed maybe too hard to overtake Josef Newgarden (CFH Racing). Both damaged its cars and the caution returned to the track to retire some debris.

The green flag restarted at Lap 23, but again the pace car had to come in due to debris in the track. 5 laps later the green flag come back again, Connor Daly who replaced the injured James Hinchcliffe in Schmidt Peterson Motorsport, flat the tyre after a contact with Ryan Hunter-Reay (Andretti Autosport) in the restart.  This caused more debris in the track which meant, pace car again for seventh time in this race.

At that moment the sky got black, the rain was coming back but it wasn’t raining at that lap 30. Anyway, Chip Ganassi Racing and Team Penske call Scott Dixon and Helio Castroneves to come in and put wet tyres in their cars.

At the restart, Andretti stole his car and lost 4 places, this made Jack Hawksworth (A.J. Foyt Enterprises) as the race leader for half a lap. The British stopped at pit lane to make his second pit stop.

Andretti and Pagenaud stopped at same lap and came out on second and third place, in front Carlos Muñoz (Andretti Autosport) took the leadership of the race for 3 laps. Those three laps helped him to make a gap of 22 seconds with his teammate Marco Andretti, and a 1 minute of distance with Will Power who was running fourth.

But the rain started to fall in a heavy way, the stewards showed the yellow flag for security but when Luca Filippi (CFH Racing) crashed into the wall at turn 1, the race was stopped. And Carlos Muñoz took the victory in a one-two for Andretti Autosport with Marco Andretti in second place.

Only 9 cars finished on leader’s lap.

Now Montoya kept his championship leadership with 11 points in front of Will Power. Behind Dixon is third with 51 points of gap and Castroneves 4th with 58 points behind his teammate. Rahal after abandon the race today, continues in fifth place, 81 behind Montoya. Andretti thanks to his podium position is now seventh in the standings as Simon Pagenaud up to ninth place. Maiden victory for Muñoz makes him a nice comeback from 14th to 10th in the standings 119 points behind the Indy500 winner, Juan Pablo Montoya.