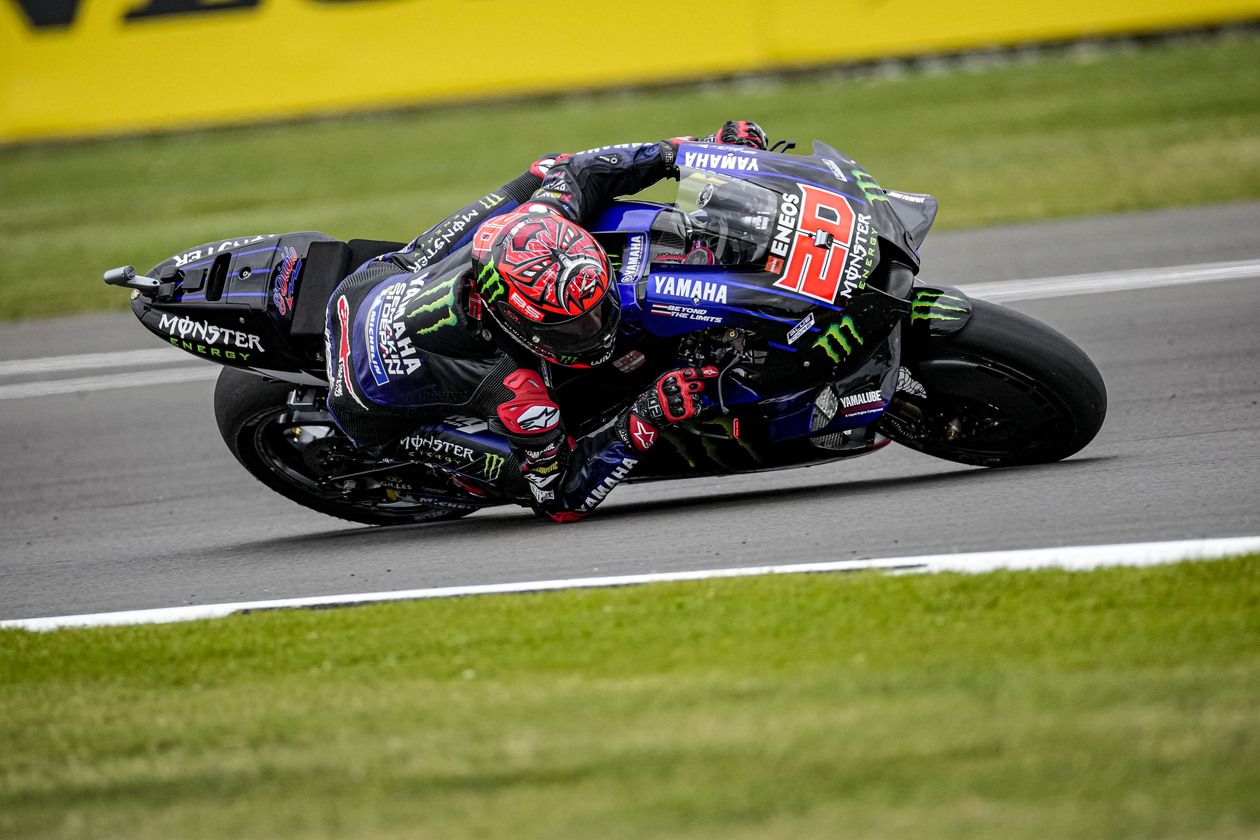 Yamaha’s Fabio Quartararo eased to win the MotoGP British GP from Suzuki’s Alex Rins, as Aprilia made history with Aleix Espargaro to end up third.

Pole-sitter Pol Espargaro made a good start to lead the MotoGP British GP from Ducati’s Francesco Bagnaia and Aprilia’s Aleix Espargaro in the Top 3, with Yamaha’s Fabio Quartararo in fourth from Ducati’s Jack Miller and Petronas SRT’s Valentino Rossi.

In the mid-pack, Honda’s Marc Marquez and Pramac Ducati’s Jorge Martin touched in the right-hander but were unscathed. The second hit, though, ended their grand prix. The former tried to sneak on the inside of the latter in another right-hander.

But the two touched and crashed out. While Martin could make it into the pits, Marquez couldn’t, as his teammate started to come under pressure from his brother. The two exchanged places couple of times, but the Honda MotoGP rider hung on.

However, Quartararo managed to pass Bagnaia and then cleared A Espargaro, before taking on P Espargaro to take the British MotoGP lead. The Aprilia rider cleared his brother for second, as the Honda man then lost out to Suzuki’s Alex Rins for third.

Rins rode well from the mid-pack to pass teammate Joan Mir and Bagnaia to put himself in podium position. The second Suzuki rider was fifth from Ducati’s Jack Miller, who cleared his struggling teammate Bagnaia after he had a wide moment to lose out.

The final point runner was Avintia Ducati’s Enea Bastianini from teammate Luca Marini, with Yamaha’s Cal Crutchlow chasing them. At the front, Quartararo built a solid gap, with A Espargaro losing out to Rins in the fight for second after the former went wide.

Behind them, a wide moment for P Espargaro allowed Miller to move to fourth. There was an upward move for Binder, who ran sixth after gaining five places from 11th towards the end. Marquez was seventh with Lecuona eighth after Mir started to drop back.

Zarco was 10th from Petrucci, Nakagami and Bastianini, with Bagnaia dropping to 14th from Marini in the Top 15. At the front, Quartararo eased in to extend his points lead with a MotoGP win British GP from Rins, who made his return on the podium.

The fight for the final place on the podium got tasty on the final lap when Miller passed Espargaro in the right-hander, but the latter came back on the former and passed him in the next couple of turns to eventually end up on the podium for his first visit.

Miller had to be content for fourth, with P Espargaro fifth from Binder, Lecuona, Marquez and Mir, as Petrucci was 10th after he cleared Zarco on the final lap. Bastianini in 12th from Nakagami, Bagnaia and Marini in the Top 15.

History made in Silverstone 👏

For the first time in the #MotoGP era, we have 6 different manufacturers in the top 6 🙌#BritishGP 🇬🇧 pic.twitter.com/ag9e61LtLF