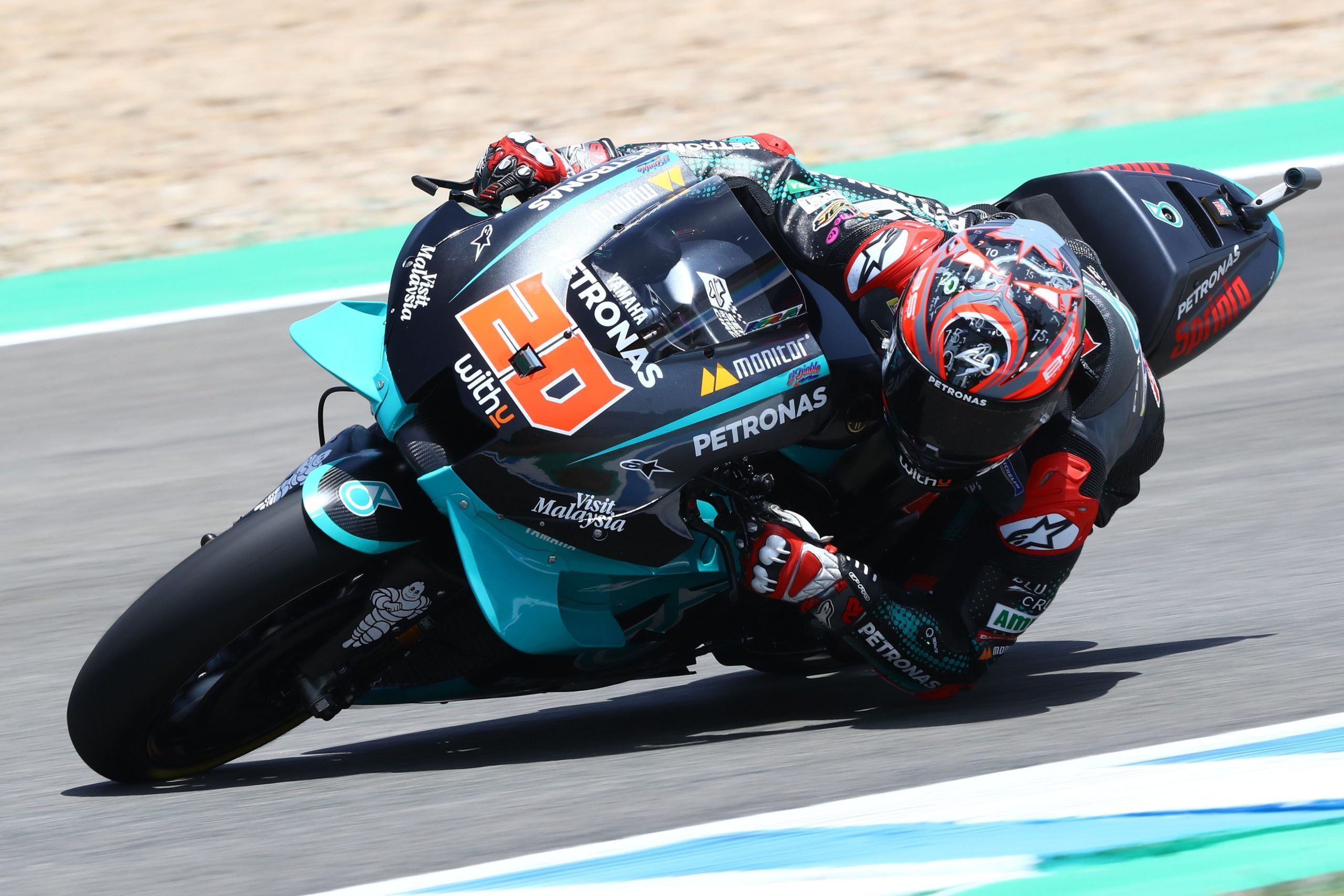 There was drama still as having gone quickest on his first lap of second run to get through Q2 with a 1m37.063s lap, Rins lost it at Turn 2 in a slow crash. It was the same place where Aprilia’s Bradley Smith had a fall moments before the Spaniard.

Rins managed to push Binder down to third and 13th for the Spanish GP as teammate Espargaro made it through in second with a 1m37.258s laps. It was also a torrid time for Ducati’s Danilo Petrucci in 14th with Nakagami in 15th.

Aprilia’s Aleix Espargaro slotted in 16th with teammate Smith in 18th as Tech 3 KTM’s Miguel Oliveira was sandwiched in 17th. The Avintia Ducati duo were 19th and 20th, respectively, as Tito Rabat pipped Johann Zarco in the end.

The Frenchman couldn’t improve due to a late fall as Honda’s Alex Marquez was only 21st with Tech 3’s Iker Leucona – the two debutants in the premier class – rounding out the 22 MotoGP runners.

The fight for first pole of the 2020 MotoGP season had Petronas SRT’s Fabio Quartararo in the lead with provisional top spot with Honda’s Marc Marquez and Pramac Ducati’s Francesco Bagnaia lining-up the front row of the grid.

It was getting tasty when on their second runs as multiple riders laid claim on pole as Marquez was first to beat Quartararo. The Honda rider was then pipped by Yamaha’s Maverick Vinales but not for long as the Frenchman was too strong.

A last-ditch 1m36.705s lap from Quartararo saw him take pole for MotoGP Spanish GP as he beat Vinales fair and square as Marquez dropped to third from Bagnaia, who was looking for a front-row start until the final push from the Honda rider.

Teammate Jack Miller slotted in fifth after a late crash at Turn 11, where he had to be alert as Suzuki’s Rins came in straight towards him. The replays showed a heavy fall for the Spaniard as it looked like he hurt his arm which he was holding getting into medical car.

Rins ended up ninth with LCR Honda’s Cal Crutchlow in sixth ahead of him along with KTM’s Espargaro and Ducati’s Andrea Dovizioso, who also had a crash at Turn 2 on his final lap. The rest of the MotoGP field had Petronas SRT’s Franco Morbidelli in 10th, Yamaha’s Valentino Rossi 11th and Suzuki’s Joan Mir 12th.

UPDATE: MotoGP confirmed a dislocated shoulder for Rins as the Spaniard maybe ruled out from the Spanish GP weekend – the formal call to be taken on Sunday.