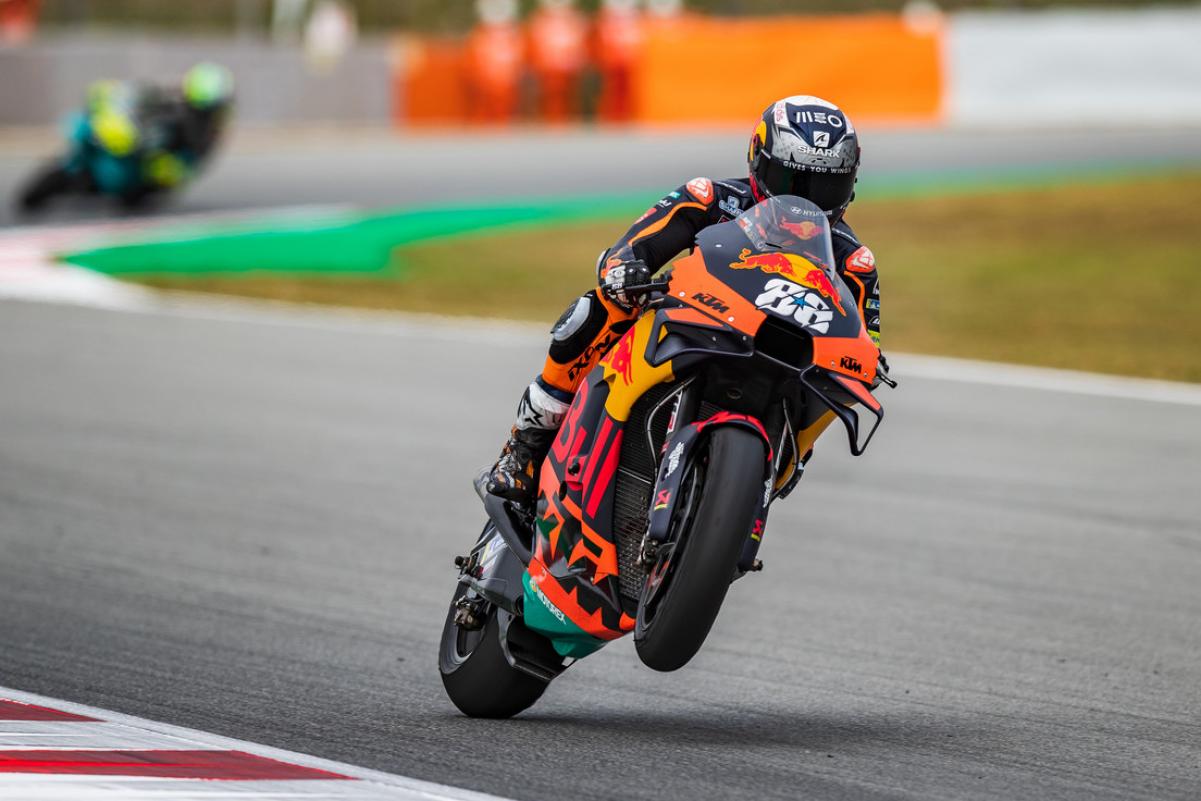 The overcast conditions made the tyre strategy open for the start of MotoGP Catalan GP, as Pramac Ducati’s Jorge Martin had a crash on the sighting lap itself. He had to run back to the pits to hop on the spare bike, but it wasn’t quick enough for grid start.

He was forced to start from pitlane, as Ducati’s Jack Miller led the Catalan GP from KTM’s Miguel Oliveira after pole-sitter Fabio Quartararo lost out on his Yamaha despite a good start off the line. Suzuki’s Joan Mir had a good start to be fourth.

The fight at the front intensified quickly with Oliveira clearing Miller for the lead, as Quartararo dropped behind Mir and Espargaro after a wide moment. Zarco steadied in fifth as Vinales and Binder had a minor touch, but both managed to carry on.

Honda’s Pol Espargaro crashed out at Turn 3, as Quartararo had to defend from Honda’s Marc Marquez, who climbed up to sixth after clearing Vinales, Espargaro and Zarco, but it wasn’t for long as the Spaniard was cleared soon by all of them.

Behind, Tech 3 KTM’s Danilo Petrucci crashed out as Oliveira led the way from Mir and Quartararo after Miller dropped behind both. While battling for sixth, Marquez crashed at Turn 10, when LCR Honda’s Takaaki Nakagami was handed a Long Gap Penalty.

The Japanese MotoGP rider took a shortcut at Turn 1-2. Moments after Marquez’s fall, Espargaro had a crash in the same corner, which caught Petronas SRT’s Valentino Rossi later in the race. At the front, Quartararo passed Mir for second.

The Frenchman also made a quick work of Oliveira for the lead, but the Portuguese rider fought back and retook the top spot. Mir, meanwhile, started to drop off due to his tyres aging, as Zarco moved up to third from Miller in the order.

Vinales was sixth from Binder, who had to fend off Ducati’s Francesco Bagnaia, as Morbidelli was ninth from Avintia Ducati’s Enea Bastianini and LCR Honda’s Alex Marquez. The trio gained places after disaster for Lecuona, who crashed out at Turn 13.

At the front, meanwhile, Oliveira continued to lead as Zarco cleared Quartararo for second. The Frenchman was running with his chest protector off in the dying stages as his bare body could be seen, while he defended hard from Miller.

Despite the late attempts from Zarco, Oliveira held on to secure his first MotoGP win with factory KTM in Catalan GP, as Quartararo held off Miller for third, but the Frenchman was handed a 3s penalty for taking a shortcut at Turn 1-2 corner.

He dropped to fourth, with Miller taking third. Behind, Mir was fifth from Vinales, as Bagnaia cleared Binder for seventh, with Morbidelli in ninth from Bastianini in the Top 10. It was a return to points for Marquez in 11th with Avintia’s Luca Marini in 12th.

UPDATE: A post-race investigation into Quartararo’s vest issue has left him with another 3s time penalty for not having his leather suit fastened. A rival of his complained to stewards about it before they investigated the said problem.

It dropped him from fourth to sixth as a result, with Mir and Vinales gaining a place to be fourth and fifth respectively. The gap in the riders’ standings has trimmed to 14 points now between Quartararo (115) and Zarco (101), with Miller third with 90.