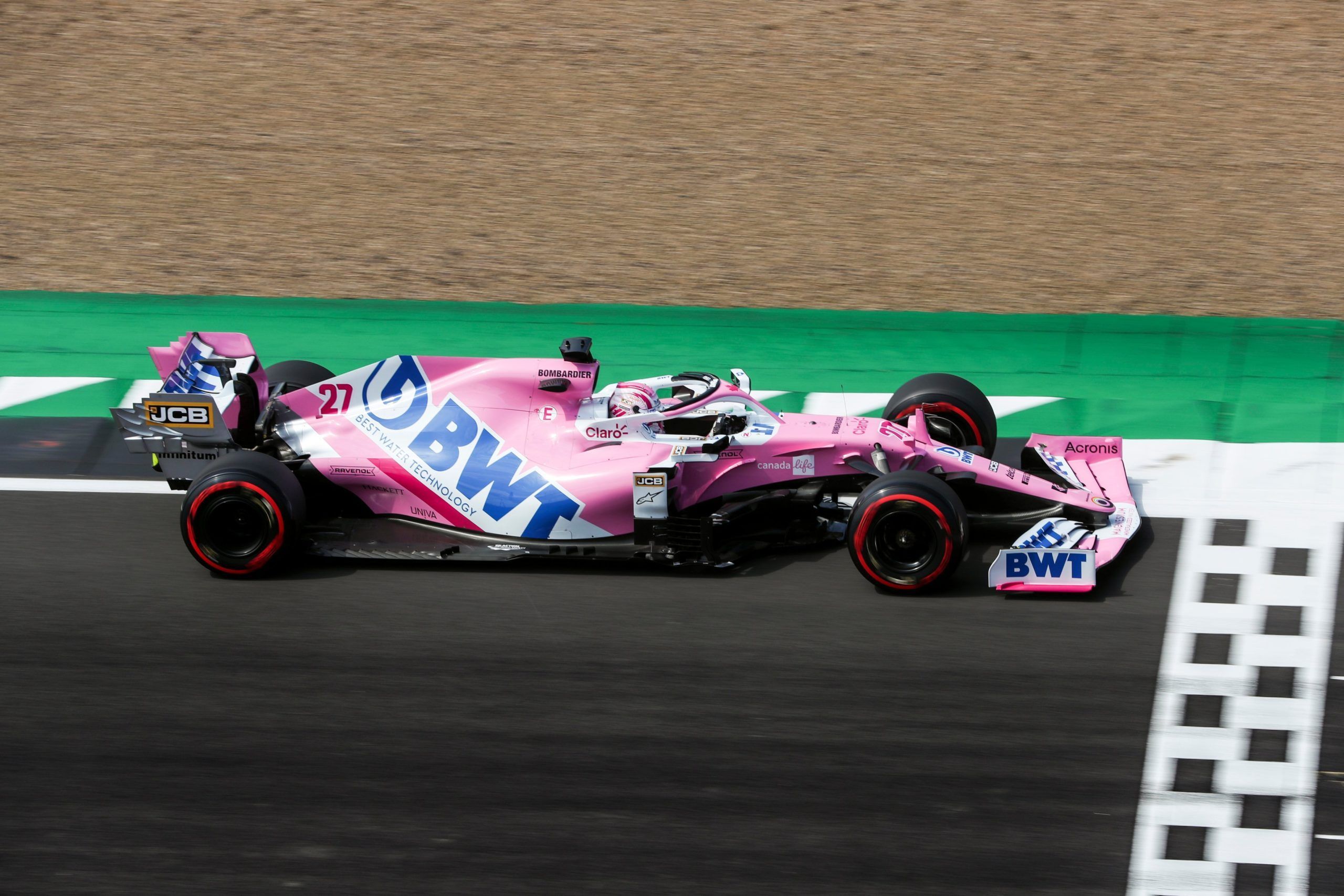 The F1 70th Anniversary GP qualifying had some bright results for the pack with tyres being the common topic as certain drivers had pure joy.

On Saturday at Silverstone, the reign of Mercedes was once again well and truly felt as Valtteri Bottas stormed to pole in F1 70th Anniversary GP ahead of his teammate, and hometown hero Lewis Hamilton.

The Mercedes’ a margin of over eight tenths of a second to the pursuing pack – led by Rcaing Point’s Nico Hulkenberg – in what was another show of unparalleled performance in the unusual 2020 season, while Bottas himself had a gap of just 0.063 seconds to his closest opponent in Hamilton.

“Very good feeling to be on pole,” said a glowing Bottas. “I love the qualifying and especially here in Silverstone. It’s pretty good fun. The feeling was from the practice sessions that the medium could be even faster than the soft tyre so that’s why in Q2, when we had both compounds, I knew that there would be still good opportunities to improve on the second run and the first run was OK.

“But I knew there was a bit missing and I could find more. There was no one key place, it was just about getting a nice clean lap and putting sectors together. It was a good lap, no doubt, so good feeling.” The Finnish driver added that starting on pole helps the mental state of a driver heading into the crucial day of the weekend: Sunday.

“Well, of course mentally, when you’re starting from the pole, you can only aim to win the race and obviously the starting point is good. I think the race pace is good. The first job is to get a good start off the line, as I had last weekend, and go from there. But the mentality is to try to win it.”

To the left of Bottas’ car in parc ferme after qualifying, meanwhile, sat a slightly dissatisfied Hamilton, the Brit having felt unable to extract the most out of his car when it mattered. As is typical of the six-time F1 world champion whenever he fails to meet his own lofty expectations, he was critical of himself at the day’s end.

“I wasn’t that great,” said Hamilton. “Valtteri did a good job and deserved the pole I guess; for me it just wasn’t a perfect last lap. He was just too quick for me. The first lap in qualifying was fairly decent and the last one wasn’t spectacular. Ultimately he did a better job, so I’m happy though for the team to have a 1-2 and to see another great result for Racing Point.”

The strategy will be big in the F1 grand prix as Pirelli has brought a softer compound range. Both Bottas and Hamilton said the idea for them was always to run the soft first and medium second in qualifying and that hard was never an option, something which they think could help Red Bull Racing’s Max Verstappen, who is the only to start on that in the Top 10.

Regardless of the performance of the Mercedes’, no story got more attention than that of Hulkenberg’s Top 3. On Friday, he looked more comfortable in the alien RP20 than he had at any point in the week prior, and the German had stated that he was in a much better position heading into his second Grand Prix weekend with the F1 team.

Evidently, he was able to convert own his tranquility into an incredible result, and one that sends an ominous message to rivals. “Obviously last weekend was really extreme – F1 comeback within 10 hours, just getting back in the paddock without any preparation 10 minutes before a session was challenging to say the least,” said Hulkenberg.

“But good fun at the same time. This week I had all these days to digest the feelings of the car and I felt much better prepared for this weekend and the lap in quali was good. In Q2 I made life a bit hard myself, going off in the first run. In Q3 I didn’t think much. I was just giving it everything, trying to squeeze everything out of the car and the tyres and myself, which is also a challenge this weekend and yeah, quite happy to be here.”

Hulkenberg stated that he is not thinking about podium and that the temporary guest F1 driver scheme is helping him mentally this weekend as he doesn’t have any set goals. Just shy of the top three was Verstappen – a driver who pinned his poor performance on his RB16’s lack of an out-and-out ‘qualifying mode’.

“I don’t know what starting on the hard tyre will give us and it depends on the first lap and Safety Cars but hopefully it will be positive and it is at least different to everyone else in the top ten,” he said. “Our race pace is normally more competitive, we just don’t have the qualifying mode that Mercedes do.  I hope the start is going to be clean and from there onwards I think we can still have a good race.

“The goal is still to be on the podium. I am also happy for Nico that he has an opportunity to show his pace. Teammate Alexander Albon, who finally progressed into Q3 once again, explained that he felt comfortable in his car until they fitted on the soft tyres for the final session, the result of which was a P9 finish. He was certain to not try hard in Q2.

Meanwhile, another major story of the day was the incredible pace of Renault, Daniel Ricciardo of course saying that he was extraordinarily happy with the car’s behavior, and in qualifying, he finished every lap satisfied as he ended up in the Top 5. “It was pretty mega, it was really cool, I think we had a bit of hype, in second practice finishing top three, I think that got everyone a little giddy,” he said.

“But I wasn’t expecting a top three in qualifying, even though we were close, but to be top five I was I was really happy. I wasn’t getting too excited because the wind did a 180 and that changes completely the balance, and it’s like driving on a new track nearly. We’re a little bit slow to get going in the morning, come qualifying we did what we had to do.

“I think every every lap I did in quali I crossed the line with quite a lot of satisfaction. Q1 I was pretty happy with my lap, and that was on the soft, but the plan was always to run medium in Q2. No one wanted to start on the soft. And I went, I think, eight-tenths quicker on the first run. On the medium, it just felt easier. The car was just happier on the medium.

“And I felt the lap time came kind of effortlessly, where I felt like the soft I had to kind of work a bit harder for. So from that point I was pretty adamant that the car was working better on the medium. So we did Q3 run one on the medium, and found another chunk of time. So when I saw we were P3 or something I thought this is definitely the better tyre for us. Now, if we’re sitting, in quali after Q3, run one, and we’ve got maybe 20 minutes of time to maybe make a decision, then maybe we would weigh up and say alright, I was pretty happy with that lap.

“Maybe there’s a tenth in it, but not much. So what the hell, let’s try soft and if it works, it works. If it doesn’t, it doesn’t, but we didn’t. We didn’t really have the luxury of time and what I felt and so on the medium that was what I wanted to go for.” Over at McLaren, there were less smiles, as the team had only one car in Q3. Some stated that this signified a step backwards from the British F1 team.

But Lando Norris – driver of the sole papaya car in the top ten – rebutted this, arguing that this is not an under-performance so much as it is a representative one, as they benefited last weekend from poor decisions and misfortunes on the part of their rivals. “I think compared to Mercedes, compared to RBR, compared to Ferrari we were exactly the same pace were compared to last week,” said Norris. “I don’t think we’ve fallen off at all.

“I think the other F1 teams,  just did a very bad job last weekend and have done a much better job and done the laps that they should do. I don’t think is anything more than that I think. We’re a bit more disappointed because there’s more cars which are ahead of us. But I think we were just in a very good position last week, maybe the wind was helping us, I don’t think it’s so much down to the tyres.

“Last weekend, it was Nico’s first, Stroll didn’t do a very lap, the Renaults didn’t do good laps and now and they’ve put in good laps and they’re clearly a long way ahead of us. So, yeah, I think we’re pretty happy that we’ve done as good of a job as we can,” said Norris, as Carlos Sainz, 13th, concurred, while defending Pirelli for the tyre choice.

A surprise entrant to beat McLaren and even Ferrari along with one Red Bull was Pierre Gasly in the AlphaTauri in seventh. He carried his momentum in what has thus far been a very successful weekend for the Frenchman. “That was an amazing Saturday and I’m very happy about my Qualifying result,” he said. “Friday was a bit difficult for us, but the team did a fantastic job from then to Saturday and made the right changes overnight to give me a car that gives me the possibility to push to the maximum.

“It was great to be P4 in Q2 and to finish Q3 in P7, ahead of the two Ferraris, McLaren and a Red Bull, it was the best result we could have hoped for. Now we focus on the race, ready to get our elbows out and try to do the best I can to get a good result for the team,” said Gasly, while his teammate Daniil Kvyat was wholly disappointed with his P16 – the result of a poorly timed gust of wind, the Russian says.

Over at Ferrari, both Charles Leclerc and Sebastian Vettel were unhappy with their respective results, but equally, they stated that there was nothing more to be done as they struggled to contend with a misbehaving car, where the Monegasque was only eighth while the German did not even make it into Q3 despite using soft.