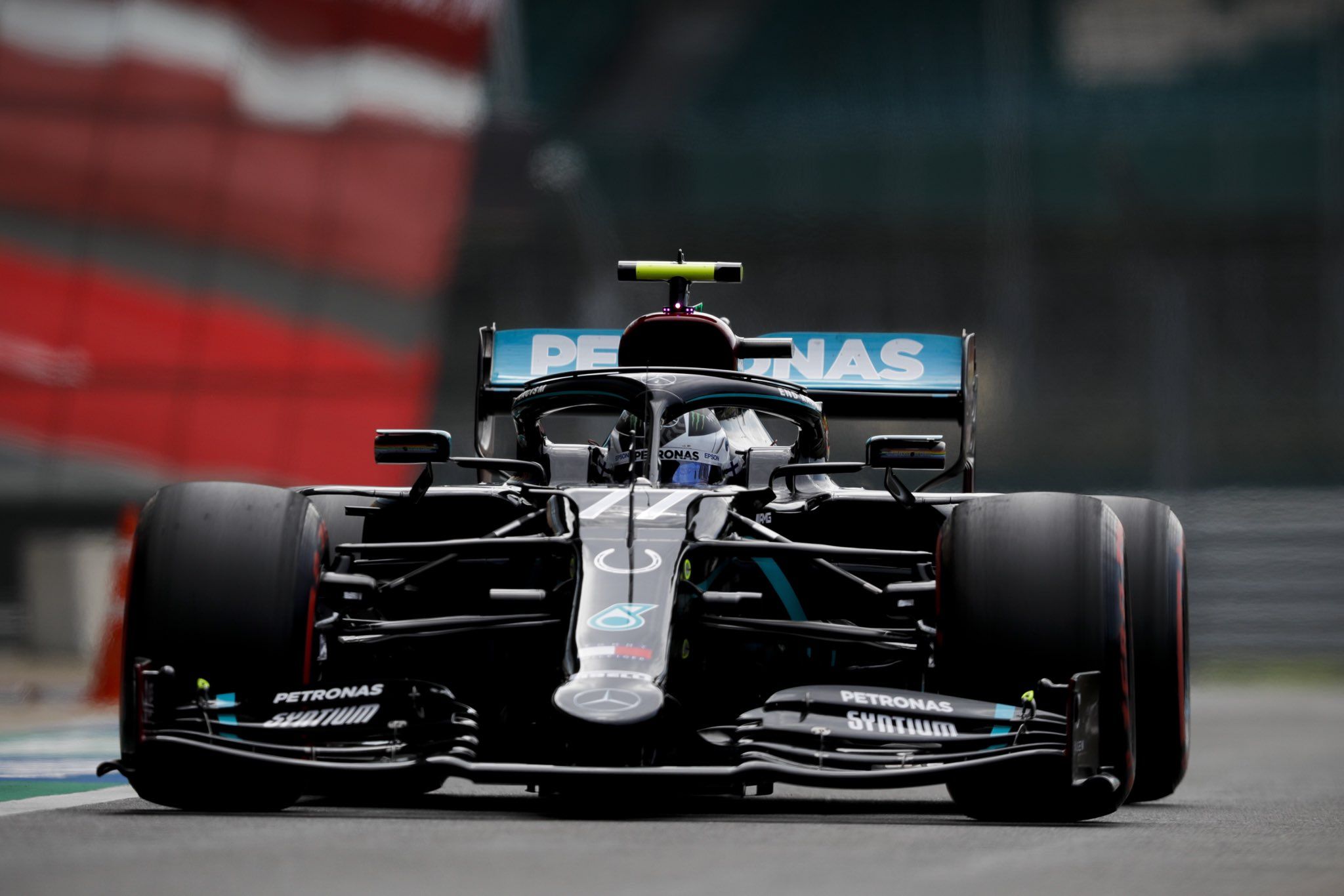 The first part in F1 70th Anniversary GP qualifying at Silverstone saw Haas duo and Williams’ George Russell try the medium tyres for their first run. They switched to the soft compounds with the Brit under investigation after he was impeded.

It was Renault’s Esteban Ocon being the guilty part but the investigation will be done after the session, with a three-place grid drop likely as the Frenchman did block Russell. Both made it through as Mercedes’ Valtteri Bottas headed Lewis Hamilton at the front.

A late quick lap from Red Bull Racing’s Alexander Albon helped him to be third as AlphaTauri’s Daniil Kvyat (1m27.882s) was knocked out in 16th after his lap was deleted due to track limits at Stowe with Haas’ Kevin Magnussen (1m28.236s) in 17th.

The other Williams of Nicholas Latifi (1m28.430s) ended up 18th with the Alfa Romeo Racing’s Antonio Giovinazzi (1m28.433s) and Kimi Raikkonen (1m28.493s) rounding out the Top 20 as the Italian beat his experienced teammate.

The second session had everyone on the medium tyres with only Red Bull’s Max Verstappen opting for the hard and Williams’ Russell on the soft. It was a late run from the Brit and the Ferrari duo as Racing Point’s Nico Hulkenberg was 13th due to minor off.

Verstappen made it through on the hard tyres to be the only one inside the Top 10 to start the F1 70th Anniversary GP on that with Ferrari having to switch to soft for Vettel as Bottas headed Hulkenberg and Hamilton as the German improved well on his final run.

The final part in F1 70th Anniversary GP had Hamilton with provisional pole after setting a 1m25.284s to be 0.116s ahead of Bottas as Renault’s Daniel Ricciardo was third on a medium compound. Even Verstappen and Albon used the same, with latter on used.

At the same time, McLaren’s Lando Norris, AlphaTauri’s Pierre Gasly, Ferrari’s Charles Leclerc and Racing Point’s Lance Stroll opted to use a used set of soft for their first run. It all came down to the second run where the field was divided too.

Both the Mercedes drivers opted for the medium tyres while Ricciardo did the same, with rest all on new sets of soft. It came down to the two Mercedes drivers with Bottas (1m25.154s) going quickest to take pole in F1 70th Anniversary GP.

UPDATE: As expected, Ocon was found guilty and has been handed a three-place grid drop for Sunday’s race as Renault did not advise of a faster Russell behind, even though they did tell about a slow Giovinazzi ahead. He drops to 14th with Vettel, Sainz and Grosjean gaining.