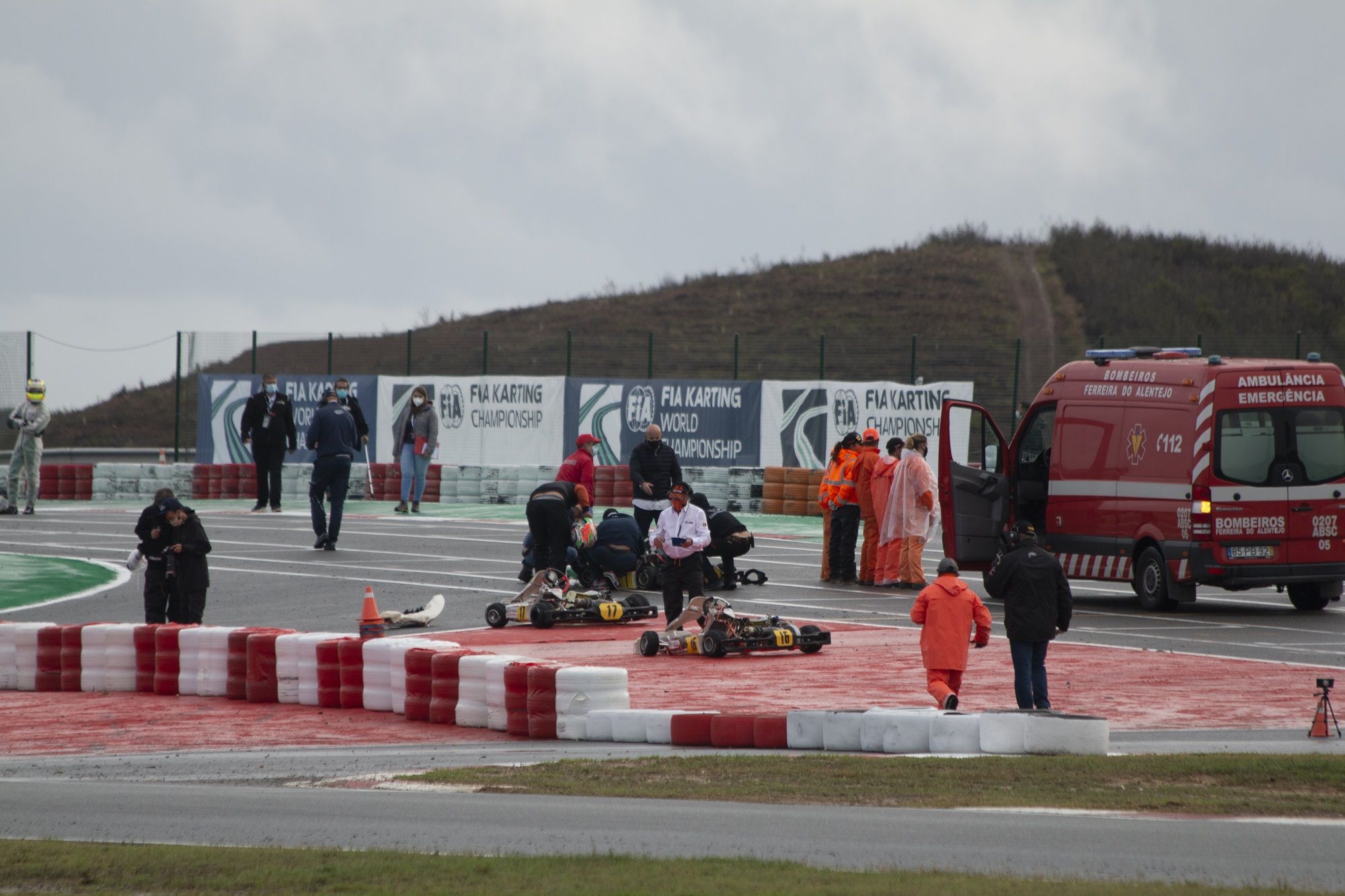 The FIA Karting World Championship was once again in the headlines, this time, for a crash for Mercedes F1 junior, Antonelli, in the OK category. The incident took place at the start of the final race on a wet Portimao kart track on Sunday afternoon.

The race was red-flagged immediately and resumed later on, where Tony Kart’s Callum Bradshaw won, to be crowned the 2020 OK champion. This, after Ricky Flynn Motorsport’s Freddie Slater, was crowned the OK Junior champion – both in the presence of Felipe Massa.

Kart Republic’s Antonelli, meanwhile, couldn’t repeat his European OK heroics from last year, as his race ended already on Lap 2 when he hit the back of Birel ART’s Maya Weug – who is one of the four finalists in the FIA Girls on Track programme.

Weung spun on track after hitting a wet patch and Antonelli couldn’t avoid her as the Italian’s steering column bent with the frame, which hit his left leg. As per multiple reports, it is understood that the Mercedes junior suffered a broken left tibia and metatarsus.

He was taken to the nearest hospital in the ambulance. Although, he was released from there, he is still under observation in the hotel, before he can return to Italy for further checks. It is likely that he will be out of action for at least a month.

Exclusive photos from the scene:

Edgar – like Crawford – entered the championship for the second time in 2020, after their car racing debut in 2019. The American scored five wins and 12 podiums in the season, eclipsed slightly by his teammate’s six wins and 11 podiums.

It was enough for Edgar to secure himself 300 points as it was a narrow margin of victory in the title fight, who won over Crawford by just the two points. Outside ADAC F4, the duo entered in three of the Italian F4 series as well, where both scored a win apiece.

As we near the end of the 2020 season in F2, with only two rounds remaining, it could be curtains for Alesi, not only in the championship but also as a Ferrari junior. In an interview to Blick, the Frenchman’s father Jean, revealed about the pending ouster.

The former F1 racer noted about Giuliano getting out, while talking about difficulty in generating sponsorship after a disastrous F2 season. “We have no sponsors for 2021, Ferrari has fired him from the Academy – and I can no longer raise any private money,” Alesi was quoted as.

“I sold my Ferrari F40 myself. In 2021 we bet on the wrong team with HWA, paid over one million euros. All promises were not kept. When we switched to MP, HWA wanted another 80,000 euros,” summed up Alesi, talking about the switch from HWA to MP Motorsport.

Alesi joined Ferrari in 2016 and raced in GP3 for three years, where he finished fifth and seventh in 2017 and 2018, respectively. He graduated to F2 in 2019 with Trident and ended up 15th but a switch to HWA Racelab in 2020 ended up in a disaster with just the eight points for lone points finish.

He made the switch to MP Motorsport in Sochi, replacing Nobuharu Matsushita, and is expected to see-through the year with them. Amid his struggles, fellow Ferrari drivers sit first, second and fifth, where one is certain to win the championship.