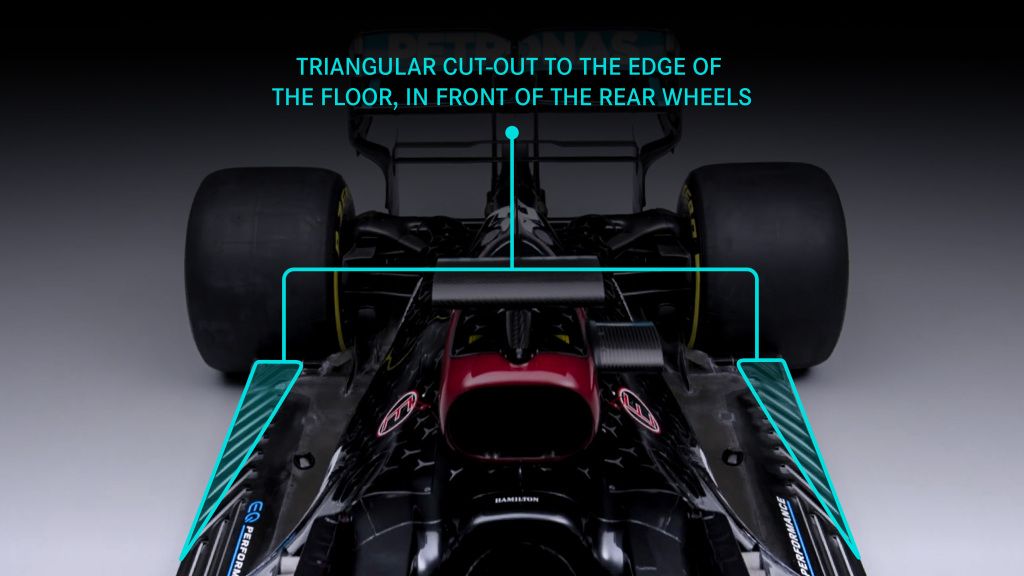 Mercedes’ James Allison discusses changes to their W12, its power unit, and the biggest areas of development on their 2021 car.

Allison explains that the greatest area of development for the team was in their aerodynamic work, despite their spending of two development tokens elsewhere on the new Mercedes car. Aerodynamic rules change significantly this year, and Allison says that this forced a number of modifications on the W12.

The Brit points to the floor as an area of notable change, the region near to the rear tyres of the car having been simplified and narrowed to reign in speeds. Allison explains that this is a quick way to lower speeds, which had become troubling in 2020 as speeds quickly exceeded those that could be handled by Pirelli’s tyres.

Beyond changes mandated by rule modifications, Allison says the team explored other ways in which they could retrieve some lost performance. “By far and away the biggest area of technical development has been adapting to the new aerodynamic rules. 2021 brings a profound set of changes that affect the performance of the floor,” Allison said.

“If you’re looking to slow a car down, which is effectively what the regulation changes were intended to do, modifying the floor is by far the easiest and cheapest way of achieving your objective. The floor is such an important aerodynamic component that small geometrical changes bring large reductions in performance.

“Once the rules had been established, our task was to figure out how to recover the losses brought by the changes. The rest of the aerodynamic work has been the normal fare of seeking out aerodynamic opportunity across every square centimetre of the car with particular attention to finding places where we can invest extra weight into fancier aerodynamic geometry,” said Allison.

The British engineer adds that Mercedes have some freedom offered on account of their lighter car and F1’s raised minimum weight. “2021 permits the cars to be 6kg heavier, and we have an additional few kilos to spend as a result of DAS being banned,” said Allison. “Beyond this, the carryover rules have confined us to figuring out how we can make some parts live longer, so we don’t have to replace or buy them so often.

“And of course, our colleagues over at Mercedes AMG High Performance Powertrains have been pushing hard to find gains to the Power Unit, delivering us a useful step forwards in a year where all the gains need to be packed into a single release of hardware,” the 53-year-old added.

Allison went on to outline each of the biggest aerodyamic changes on the W12, from those on the floor to in other areas. “I’ll explain the triangular cut-out on the edge of the floor first. This is located just in front of the rear wheels, reducing the area and shape of the floor.

“It may not look like a big change, but the way the floor and the rear wheels interact is critically important to the performance of the car. So, removing this part of the floor has a big impact on downforce,” Allison rightly points out. Further changes apparently relate to new brake ducts, which the Brit says are stripped of their “proliferation of winglets.”

“It’s related to the rear bake ducts, which for several seasons have featured a proliferation of winglets that are mounted on the brake ducts and point inwards towards the centreline of the car. These winglets generate a little bit of downforce in their own right, but their far more important role is to guide the interaction between the rear tyres and the floor, helping the floor to produce far more downforce than the winglets could ever manage on their own.

“The span of these winglets has been reduced by a few centimetres so they don’t overlap as much with the floor as they used to, thereby reducing the performance of the car,” said Allison. “This is related to the edges of the floor, near the bargeboards and the radiator air intakes. In recent seasons all the cars have sported an array of slots on the floor in this section of the car, almost looking like a venetian blind.

“For 2021 the rule has changed, requiring us to seal those slots up. This reduces our ability to create downforce at the lateral periphery of the floor,” Allison said. Also limited is the team’s use of a diffuser, which has smaller strakes in 2021 than it has had in prior seasons, as is mandated by the regulations.

“The third change is at the back of the car around the diffuser area. When we are designing the diffuser, we are trying to expand the air as much as we can while keeping the air attached to the surface of the diffuser. More expansion means lower pressures under your car, which means more suction pulling the car to the road, which means more downforce.

“However, if you get too greedy, expanding the air too rapidly, then the air will not follow the shape of the diffuser and instead of being swept upwards, it will separate from the car. This is called stalling, and it causes the downforce to decrease dramatically. One of the tricks to expand the air more aggressively without stalling is to separate the diffuser into distinct areas with carefully designed fences called “diffuser strakes”.

“For 2021, the inboard set of strakes, the ones nearest the centre line of the car, have had their bottom 50mm sawn off so that they don’t sit as close to the ground as before. By making the fences shorter, they are less effective at dividing the diffuser into separate regions and therefore less effective at controlling the rate of expansion of the air.

“All things being equal, this makes it harder to be greedy with the diffuser expansion, and so it reduces the downforce on the car,” Allison summed up, as his colleague from the Mercedes HPP division then stepped up to explain the power unit changes. Hywel Thomas revealed that the engine has been fixed from its 2020 troubles for better reliability.

“We identified three main areas to work on: first, we’ve continued the development of the technology in the Power Unit,” said Thomas. “That’s a continuous process, and we feel like we’ve been able to take a step forward on that front again this year. The second area is reliability. We discovered some design issues last year, so we’ve been looking at those and introduced some changes to address them.

“And we’ve also got some completely new innovations that will be in the racing PU for the first time. That was particularly challenging because last season finished late, so the winter period has been shorter than normal and has given us less time to prepare, which put extra strain on the business.”

Here’s Toto Wolff saying that he needs to communicate more