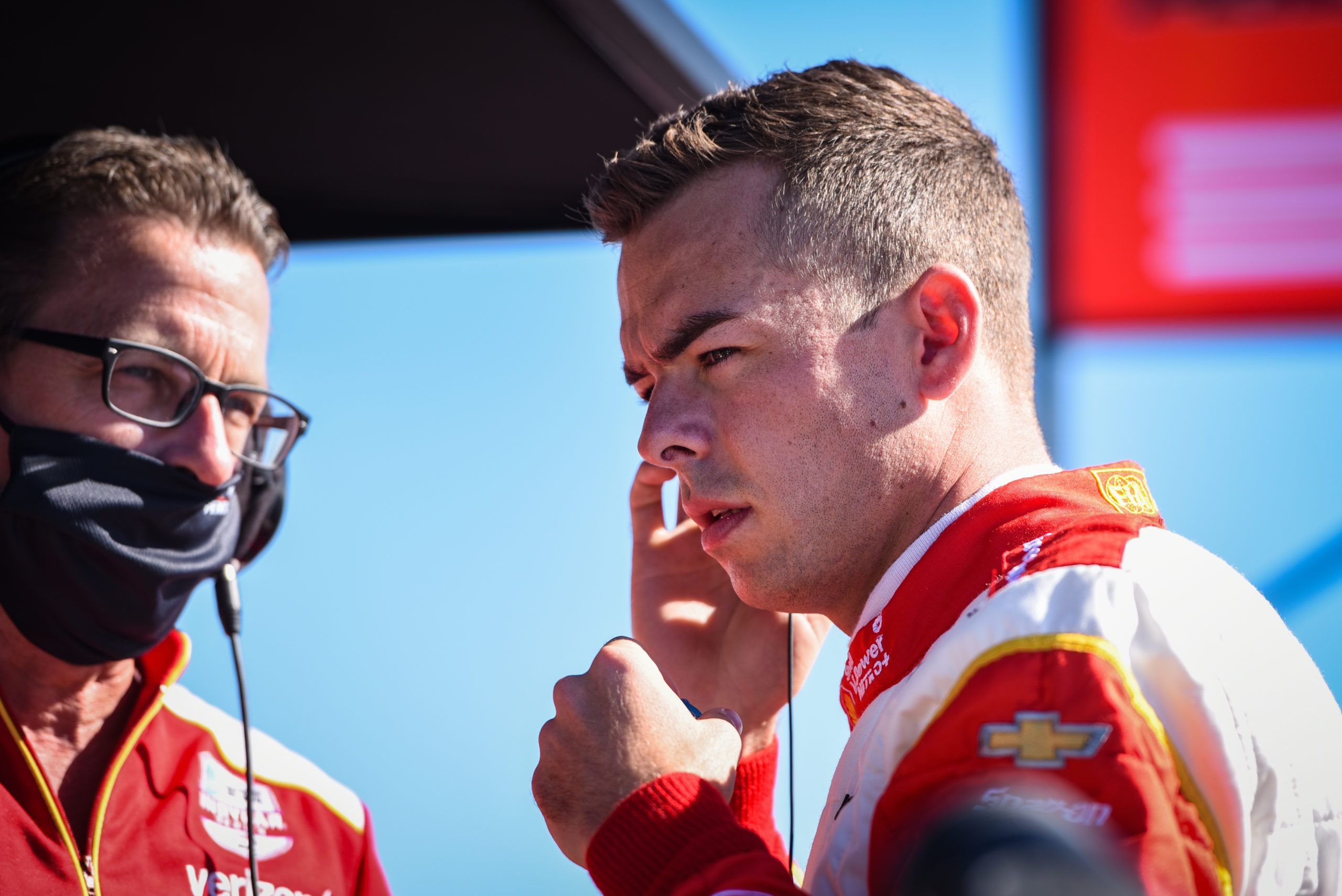 Team Penske’s Scott McLaughlin says he is remaining “realistic” about racing with his teammates in 2021 – which he says will be a “learning year.”

McLaughlin found great success in Supercars, winning three championships in the category in his nine seasons there. The Kiwi, however, is inexperienced in open-wheel machinery, having not raced any car of the kind since long before his Supercars debut – barring his participation in the 2020 Firestone GP of St. Petersburg.

As a result, he says, McLaughlin intends to remain “realistic” about his chances of challenging his Penske teammates early in the season – one which will be a “learning year,” according to the 27-year-old. “My competitive instincts, probably not going to be okay with [losing to teammates]. I’m very competitive, but I’m realistic at the same time.

“I’ve got a lot to learn. Yeah, I’d love to try and beat them a few times throughout the season. I’m not putting off that I can’t. I think if I feel the car and work with my engineer well enough and get better and better, there’s no reason why we can’t be at the same pace as those guys, if not better. But I’m very lucky in that way,” said McLaughlin.

The Penske driver says his intent is to learn all he can from his teammates Josef Newgarden, Simon Pagenaud, and Will Power. Even with experienced drivers around him, however, the three-time Supercars champion expects a learning curve. “They’re three very different guys in terms of driving style. I[‘ve] got best of both worlds.

“I can pick sort of what I want to do, how I want to feel the car kind of thing. Yeah, look, it is a learning year. I’m being realistic. I know it’s going to take time. Those guys got experience. Everyone has experience here. I’d love to — yeah, for sure, my competitive instinct will kick on at some point for sure,” McLaughlin shared.

Newgarden is tremendously excited for McLaughlin to join the team, as Penske expands to a full-time line-up of four cars. The American also has kind words for his new teammate, who he predicts can contribute to the team to a great extent in 2021. “It’s good timing for us. We operate well as a three-car team. When I initially came to Team Penske, it was a four-car operation. I’ve seen both sides of it.

“I think at this time and place, I think a four-car team will give us more strengths than weaknesses at the moment. Like Jack had asked the question about limited time on race weekends, trying to show up as prepared as possible, which is so critical now. I think having an extra car, extra hand, extra set of data, extra engineer full-time, it’s all going to benefit what we’re doing. We’re already seeing that. We’re already seeing the benefit of it.

“Scott is a really smart, accomplished driver. He’s really good at what he does. He’s still learning IndyCar. He’s not fully up to speed, I would say. He’s not going to struggle. He drives his car to a very high level. His engineer, Jonathan Diuguid, is a strong addition to our operation. I think it’s going to be a big benefit to us, to have a four-car operation. I’m excited from that standpoint,” Newgarden said.

Power even goes as far as to suggest that he, Newgarden, and Pagenaud can learn from McLaughlin’s techniques, particularly in low-speed corners where, he points out, mechanical grip – the sort which a V8 Supercar relies on – is most impactful. “Obviously the biggest change for him is the amount of downforce and commitment with these cars, like the faster you go, the more grip you have, significantly so,” he said.

“Yeah, there will be things you learn off him, that we learn off him, especially in slow corners when the car is more about mechanical grip, what he’s used to, but yeah, he’ll be doing most of the learning just because it’s his first year in the car. But yeah, he’ll be — he’s going to be solid. He’ll be very good in years to come.”

Pagenaud predicts with great confidence that McLaughlin will win a race in 2021, telling those who follow IndyCar to “expect great things” from the hotly-discussed rookie as he also states that a championship is in the Kiwi’s future. “He’s a phenomenal driver. He’s got a great driver, and [gives] really good feedback as well. I’ve really liked him coming on board. It’s four drivers now. It’s a little bit more — it’s a good number working together.

“It helps having him, having his engineer and everybody that was added from the sports car program. I think the IndyCar program got a lot stronger suddenly because of that venue. Really excited about having him on the team. I’ll tell you what, he’s going to be tough to beat in the future. He’s going to be a champion. He’s being tempered because he has to be. But I’ll tell you what, on the other side, seeing what he can do, expect great things,” Pagenaud teased.

Here’s what second year drivers of IndyCar say about 2021