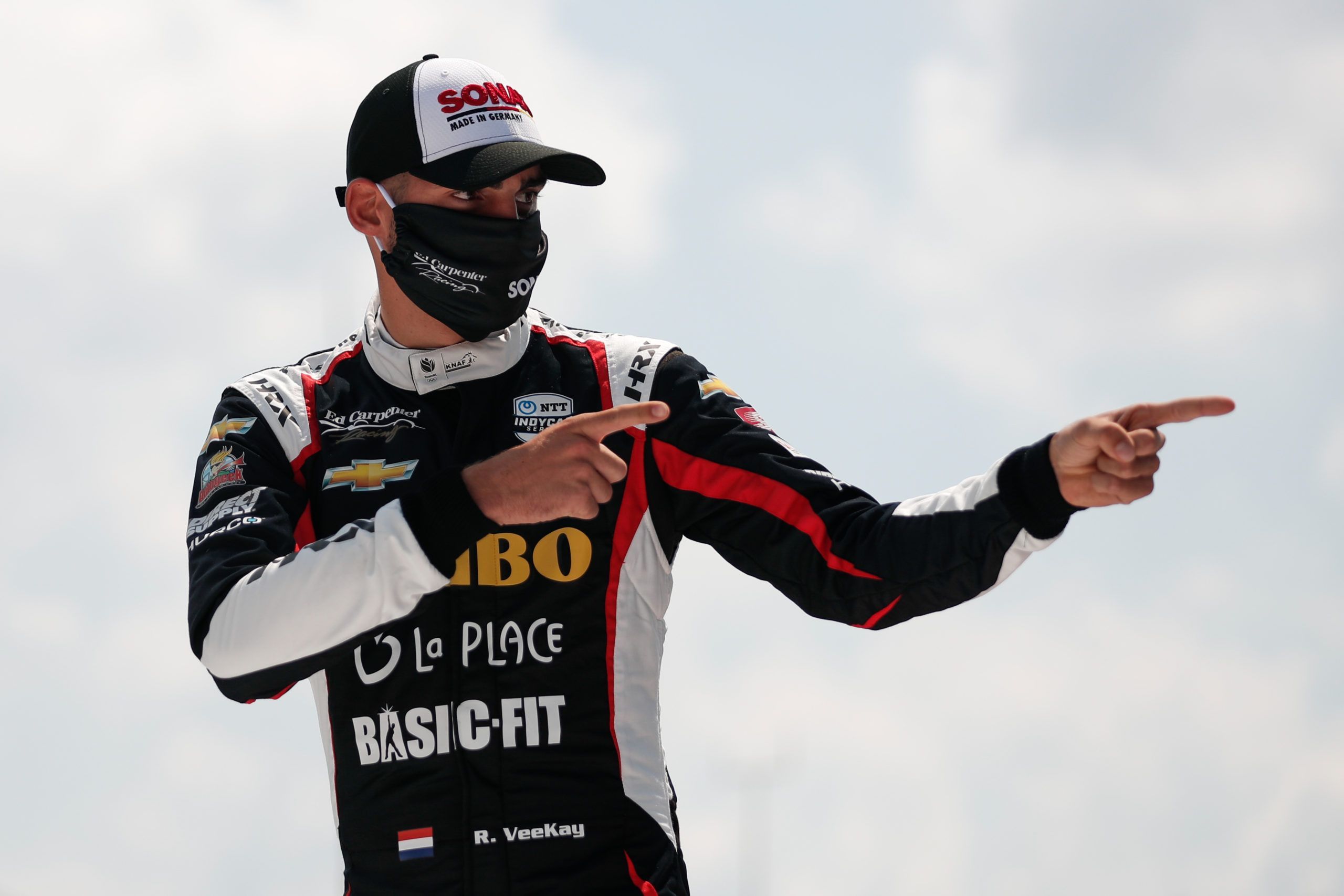 The sophomore class in the 2021 IndyCar grid look to the upcoming season with excitement, as they approach it with new experience.

2020’s rookie class of four full-time debutants was cut down to three as they enter 2021, with the axing of former Arrow McLaren SP driver Oliver Askew. The three remaining sophomores this season represent as many teams, with Rinus Veekay competing for Ed Carpenter Racing, Alex Palou for the Chip Ganassi squad, and Patricio O’Ward remaining with AMSP.

The three have each learned from their respective rookie years, with 2020’s Rookie of The Year Veekay saying he’s come to understand the importance of risk assessment. The Dutchman drew eyeballs last season with his aggressive overtaking, but was also involved in a few accidents throughout his campaign– as he was in his Texas debut.

“Well, I found out that finishing a race is quite important, so I will always race as hard as I can, as fair as I can. But definitely don’t take any risk, any unnecessary risk. Beginning of the season I was just really aggressive,” Veekay conceded. “Came away with it a few times, but also in Texas it was just too much.

“I definitely learned a lot from those races, and yeah, it made me a complete driver. I think now, yeah, I’ll have to make sure I keep it all going, and yeah, finish as well as possible every race,” he said. The 20-year-old also says he’s become more professional working with the team as he enters his second year there.

“Well, we’re also working together all the time to make each other better. Of course, I’m not a robot, so I can do a lot of stuff better. We’re all working together. It’s a really nice team in terms of cooperation, so it’s very free. I can say whatever I want, and everyone wants to get better at everything,” Veekay said.

“I can already see that the team has made progression in the off-season, and I’m getting more professional. I now expect more what the team wants from me, so I can anticipate more of that coming into the race weekends and make sure I prepare better for the coming races,” he added.

O’Ward says he has learned the importance of Qualifying from his first year, as well as understood the consequence of pit stops, which cost him on various occasions. The Mexican blames his own approach for these failures more so than he blames his team, and says that successful pit stops could mean he is in contention for the championship at season’s end. “Man, I rewatched every race where we were in contention, both Iowa races, both Gateway races, Road America,” O’Ward began.

“Just from things that I learned last year, you qualify up front, you make your life so much easier. Another thing is that pit stops are huge in IndyCar racing. I lost a lot of my race wins because we didn’t execute in the pits, and that’s huge. I feel like our pace was very, very strong. I think we were very strong in many places that we went to all year.

“But where we need to push this year, and we may need to make sure if we have a mistake it has to be minimized, is in the pits, and me as a driver just do my job. I know that if we can accomplish that, we will get race wins because if the pace is there, just like last year but maybe even a little bit better, qualifying further up front should make it easier on us, every single pit stop, execute, execute, execute.

“I think that’s what’s going to make us be in contention by the end of the year. Last year getting to St. Pete, I think second was the best we could have done. But we want to get to Long Beach knowing that there is a possibility of being able to win the championship. That is the goal. We set a bar very high last year. I agree. I looked back and I said, That’s a mega year. My first full year in IndyCar and I even exceeded my expectations.

“But that put a very high bar, and now we want to make that better. Is it going to be easy? No, it’s going to be ridiculously hard. But I think if we just take everything step by step and everyone does their job, minimize mistakes, we should be in the fight in the end,” O’Ward said.

CGR’s Palou looks forward to the coming season, in which he won’t “have to worry [about] the basic things [like] how is the weekend schedule,” and can focus more on the racing itself now that he is acclimated to the series. “Yeah, so I think having a rookie year, that’s going to help a lot personally, mainly because I don’t have to worry like the basic things about how is the weekend schedule, like what do we have to do during a weekend, what’s the new tracks I have to be.

“I’m still going to have some new tracks to learn, but there’s going to be less than in 2020 for sure. I just think I’m a bit more prepared for sure. I have a better car. I have better data because now I have three teammates. Last year I had only one, so I have more information. One of them is a six-time IndyCar champion, the other is a seven-time NASCAR champion, and then there’s Marcus and Tony, as well, depending on the race. I think I have everything ready and set to have a good year,” Palou said with confidence.

Though only on a part-time schedule in 2020, AJ Foyt’s Dalton Kellett says he will benefit from a full campaign in 2021, as he feels “continuity” will aid him in his efforts. “You know, I think jumping into that other car with, like I said, sharing it with Tony and Seb, that made it difficult.

“But the big thing, it wasn’t so much that we were sharing the same car, it was just not doing all of the races. I think having that continuity makes it easier. I think the drivers hopping in and out of the car is more of a pain for the mechanics, having to get everything set up because we have different height and weight and all that and pedals and whatnot.

“So it adds a lot more work that could have been spent on other stuff. It will help the mechanics a lot to have that kind of consistency throughout the year. For me, just knowing that we’re always working on our program and making those iterative improvements, it’ll be a little easier this year,” Kellett said.