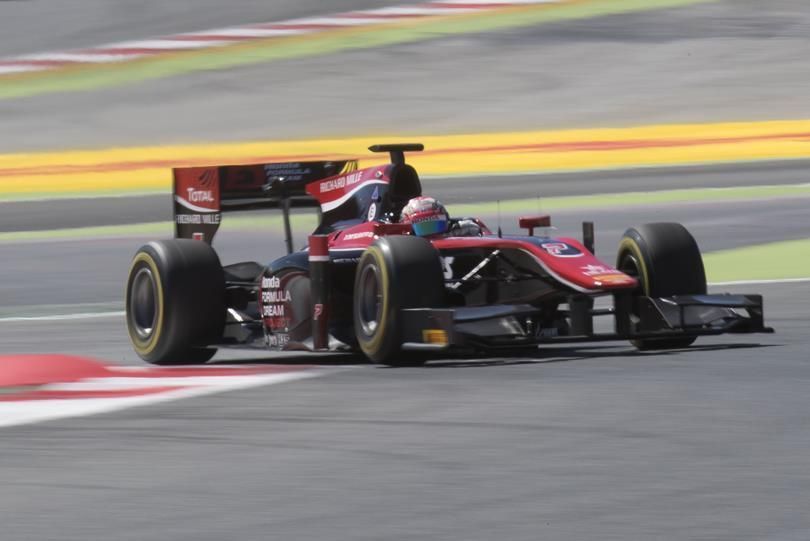 Second Formula 2 race in Montmeló has finished with Nobuharu Matsushita winning after a mistake of Nicholas Latifi, who was finished third, while he was leading. Oliver Rowland has finished in second place.

Race began and Artem Markelov did an awful start, which made him fall from Pole to ninth place. Nicholas Latifi moved up from third place to the lead. Behind them, Ralph Boschung got stalled on his grid position. On turn 7, there was contact between Nyck De Vries and Antonio Fuoco. Both cars had to be removed from the track, which caused a Safety Car.

Safety Car stayed on track for only one lap and, coming back to green flag, Charles Leclerc, who started eight and was still on that position, overtook Jordan King. Oliver Rowland, who had also a good start, overtook Luca Ghiotto for fourth place. Sean Gelael got a ten-seconds penalty for overtaking Sergio Canamasas under Safety Car period.

Nothing was happening during the next few laps. On lap 11, Alex Albon and Leclerc passed Ghiotto, who would also lose a place to Markelov some corners later. On the lead, the top three drivers were getting close to each other. Nobuharu Matsushita‘s pressure forced Malja to make a mistake in turn 1 and the Japanese driver was now second. Swedish driver was also overtaken by Rowland and was caught by Albon and Leclerc. The Monegasque overtooke the Thai on lap 20, but Malja was still ahead until next lap, when he was beaten by the Prema driver.

On lap 22, after comfortably leading the entire race, Latifi ran wide in turn 6 and finished in the gravel trap. He returned to track in third place and tried to recover second place, that was now for Rowland. Matsushita was the new leader and had it easy to win. On the last laps, King overtook Albon and Malja and improved to 5th position. Ghiotto passed Albon on the last lap.

The race finished and Matsushita took his first win of the season and his third on the series. The Japanese driver did a great start, stayed on top places without making mistakes and, when Latifi, who has finished third, did that silly mistake, he found himself leading the race. Rowland, who has also run solid and competitive, has finished second.

With these results, Leclerc, who has finished in fourth place, keeps leading the championship with 73 points; he’s followed by Rowland with 47, Ghiotto with 38, Markelov with 34 and Matsushita with 31. Second round of the championship is now over and next races will be held in two weeks in the Monaco Circuit.