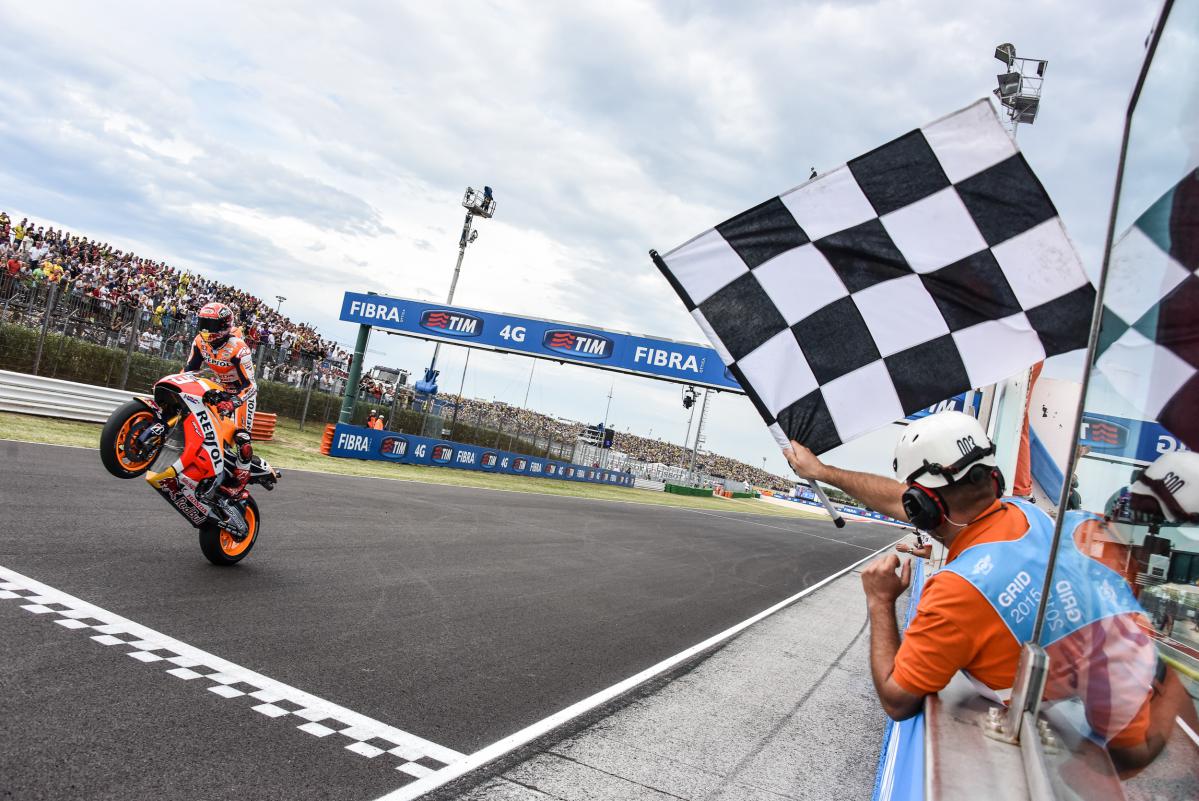 Marc Marquez wins one of the most dramatic MotoGP™ races ever ahead of Smith and Redding, with Rossi in fifth and Lorenzo crashes out.

Repsol Honda’s Marquez took his fourth win of the season at the Gran Premio TIM di San Marino e della Riviera di Rimini in some of the most difficult conditions the MotoGP™ World Championship has seen in recent years. The Spaniard took his 23rd MotoGP™ victory after gambling in a flag-to-flag race that saw most riders pit twice due to the changing conditions.

A record 92,000 fans at the Misano World Circuit Marco Simoncelli bore witness to an incredible spectacle but were denied a Valentino Rossi victory as the Italian crossed the line in fifth. Rossi managed to extend his lead in the championship standings to 23 points over teammate Lorenzo after the Spaniard crashed out of the race in second.

There was drama on the grid as drops of rain started to fall, riders setting off on their Warm Up lap with baited breath. Meanwhile, Ducati Team’s wildcard Michele Pirro had an issue with his GP15 and was forced to start from pit lane on his second bike, equipped with wet tyres.

The rest of the MotoGP™ field started on slicks with Jorge Lorenzo setting a scalding pace from the start with a trademark launch off the line. Small battles emerged throughout the opening lap, but drama came as the white flags were flown on lap two. This signaled that all riders were able to come in and swap to their second bikes if conditions deteriorated.

Lorenzo forged ahead undeterred with Marc Marquez close behind, the duo able to break away from Valentino Rossi who struggled in the opening laps. All the while rained continued to fall, some riders pushed even harder in the conditions while many tiptoed around, waiting to follow their rivals into the pits. By lap six the pace had dropped by close to six seconds and Dani Pedrosa (Repsol Honda) found himself battling the Ducati Team pair of Andrea Iannone and Andrea Dovizioso, but the riders were visibly timid in the tricky conditions.

Estrella Galicia 0,0 Marc VDS Racing’s Scott Redding had been involved in this battle for fourth, but on the seventh lap disaster struck as the Brit ran on and dropped his Honda. Determined as ever, he sprinted to his bike and dove into the pits for wet tyres. By this stage the majority of MotoGP™ riders had also opted for wet bike change, just the front three of Lorenzo, Rossi and Marquez staying out.

As is usual in racing, the top three all dove into the pits together, adopting the same strategy as your rival is often the safest option in unusual circumstances such as the San Marino GP. Even in pit lane there was drama as Marquez and Lorenzo almost collided, the Yamaha rider gesturing to Marquez to ‘stay calm’ as they returned to track.

With the three re-joining at the same time, it was clear Lorenzo and Marquez had a quicker pace than Rossi and the Italian soon found himself 2.5 seconds behind Lorenzo. Lorenzo himself was able to get through on Marquez at Turn 8 when the Honda rider ran wide on the tenth lap. All riders found it difficult to tell where was wet and where was dry as the new Misano surface is quite dark.

But as the track began to dry, Rossi began to fly. The Italian gaining over a second a lap on the two leaders with each circulation, despite his front wet tyre rapidly starting to deteriorate. Worried mechanics worked hurriedly in pit lane, preparing bikes for a second change of the race.

Loris Baz (Forward Racing) was one of the first to jump back onto slicks, the Open rider soon finding himself inside the top ten as the rest of the field also opted to change back. Meanwhile, Bradley Smith (Monster Yamaha Tech 3) was struggling outside the points having remained on slicks throughout the entire race. The Brit followed his instincts to risk it after missing the opportunity to change with the rest of the pack.

Again, it was the top three who stuck together and stayed out long after the others. Rossi and Lorenzo battling tooth and claw for multiple laps as Marquez played it safe, waiting behind the Yamaha pair and assessing their tyres. On lap 18 Marquez decided it was time to swap back to slicks, a move that would prove to be a masterstroke. Lorenzo would join Marquez on slicks the following lap while Rossi continued to push ahead, 92,000 fans roaring in approval.

Disaster struck as ‘The Doctor’ pitted, with just seven laps to go Lorenzo fell at Turn 15. The Mallorcan suffered a small contusion to his right hand and his Yamaha M1 took a severe beating, but it was his championship hopes that came off worst of all. With eyes transfixed on the front-runners, Baz, Redding and Smith continued their silent charge through the order.

Marquez had chosen the perfect time to pit, he had built enough of an advantage to maintain a solid lead in the race even with his second pit stop and Smith’s gamble to stay out on slicks was finally paying off after a multitude of laps spent tiptoeing around and dropping as low as 21st, the Brit in a solid second now. As Lorenzo fell, Baz was promoted into third.

Sadly for the Frenchmen this would not last as Redding, who had swapped to slicks earlier than many riders after being unable to find a good feeling on wets, rapidly gained on the Open rider, passing him with four laps to go.

The positions settled in with just a handful of laps remaining and for the fourth time in 2015 Marquez secured victory, his first MotoGP™ victory at Misano. An elated, and somewhat surprised, Bradley Smith joined him with a second place finish and Scott Redding rounded out the podium with his first premier class podium finish. This was the first time since the 1979 Venezuelan GP (Barry Sheen & Tom Herron) that two British riders have finished on a podium in the premier class. Loris Baz may have been forced off the podium, but a fourth place finish delivers an incredible result for his Open Championship campaign.

With the yellow smoke settled and customary post-race track invasion dispersed, Rossi maintains his lead of the MotoGP™ World Championship with 247 points, now 23 clear of Lorenzo due to his DNF. Marquez jumps to 184, a comfortable margin ahead of Andrea Iannone who has 159 points. A second MotoGP™ podium gifted Britain’s Bradley Smith 20 points and cements him in fifth overall. Loris Baz jumps to 15th overall in the World Standings, with 28 points, now five points ahead of Hector Barbera (Avintia Racing) in the Open battle.

Alongside Lorenzo there was misfortune for Alex De Angelis (E-Motion IodaRacing Team) and Yonny Hernandez (Octo Pramac Racing) who came together at Turn 6. With just two laps to go Pol Espargaro (Monster Yamaha Tech 3) also fell, his fourth DNF of the year.