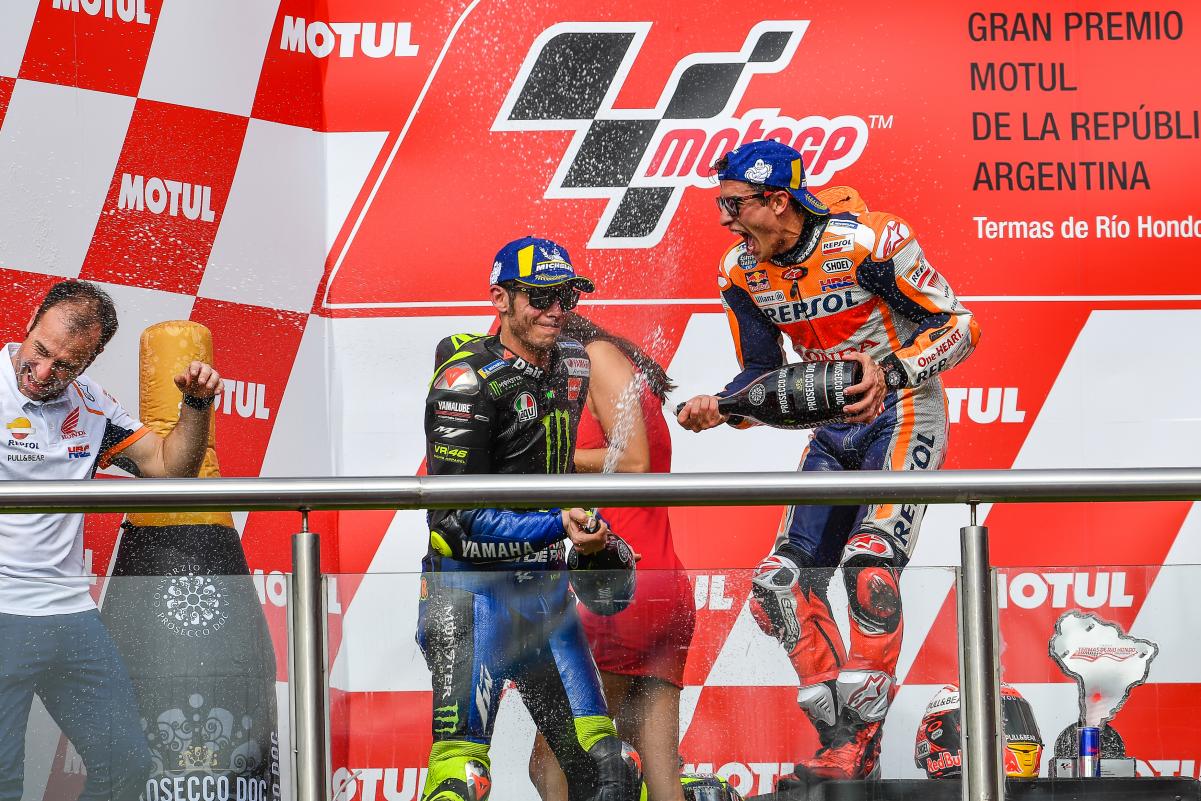 The scenes were ugly a year ago in Argentina when Marquez and Rossi had yet another spat on track when the Spaniard pushed the Italian off while recovering from the back of the pack. The Yamaha rider was livid with the unprofessional riding of Marquez.

The Honda rider was quick to apologise but Rossi denied to accept. Few races later, the Italian refused to shake hands with Marquez during San Marino’s press conference with the Italian stating that there was no need for such acts as there isn’t any problem.

One year after the infamous clash in Argentina, Rossi had a changed tune as the Italian himself shook Marquez’s hands just as they were getting ready to get on the podium after a dominant display from the Honda rider.

Rossi was quite chuffed to get second after a supreme fight against Ducati’s Andrea Dovizioso in a last-lap move. Post the grand prix, Marquez, in a visit to Brazil for Estrella Galicia 0.0 event, said good words about Rossi and his gesture.

“Whatever happens with Valentino in the media it has a lot of ‘boom’ because he the most popular rider on the grid,” said Marquez. “I didn’t have problems admitting that it was my mistake [last year] and that’s why I went to apologise.

“The important thing is knowing that you’ve made a mistake, but this year the story has actually changed quite a lot. Time solves everything. But being friends with one of your rivals, whether Valentino or someone else, is really difficult, almost impossible.

“Because later on track there is a rivalry, although, off track, you have to have respect.” The Spaniard hailed the Italian’s incredible feat of still racing and pushing at 40-years as he joked about racing as teammates with Rossi if he continues to compete till 50-years.

“If he rides until he’s 50, you never know, but seriously, what Valentino is doing at 40 is incredible, mostly because of how he keeps motivated and maintains his spirit. It will be difficult sharing a team all those years.”

Talking about the 2019 MotoGP championship, Marquez once again put Dovizioso and Rossi in the challenging list. The Spaniard was also convinced with Honda teammate Jorge Lorenzo’s caliber despite the difficult start for his fellow countryman due to injuries.

“Dovizioso will maybe make things difficult, but Valentino will be there,” he said. ‘It’s curious that each year there are new names, but in the end the same appear. Last year we finished Valentino, Dovi and me as top three in the championship.

“This year we’re the same. As for my teammate, Jorge is maybe struggling to adapt more, but he has the same talent as always. In the end, he will end up going fast, I’m sure.” With two rounds in the books, Marquez (45) leads Dovzioso (41) and Rossi (31).