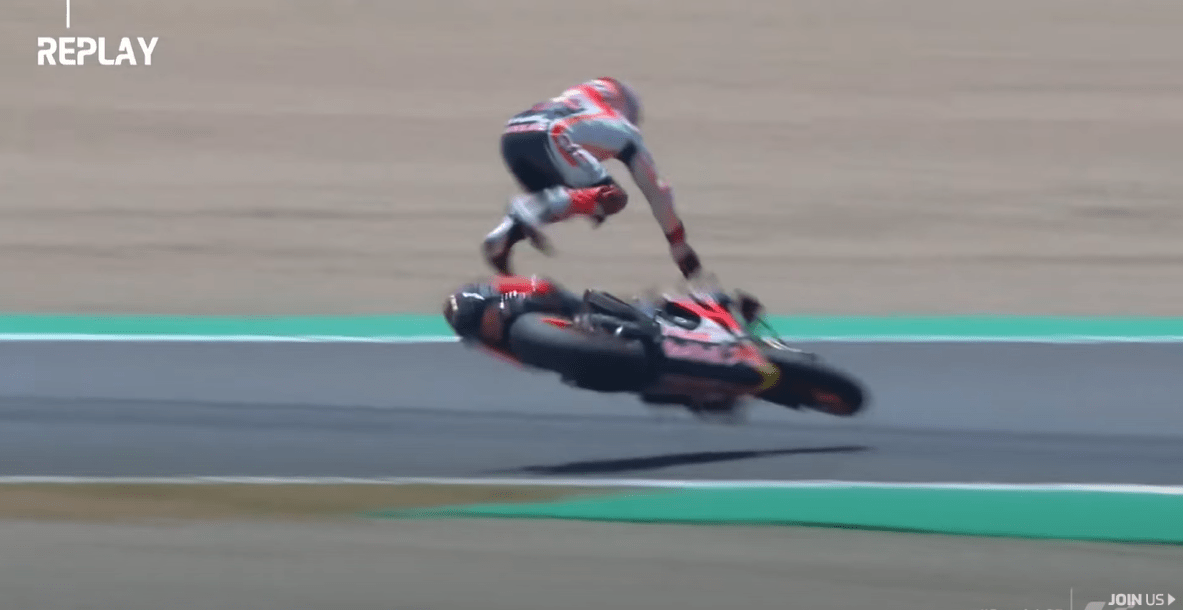 Honda riders Marc Marquez and Cal Crutchlow are set for surgery after their separate crashes during the Spanish MotoGP weekend at Jerez.

For three riders, the opening weekend of the 2020 MotoGP season did not end well as they are in a dangerous position to miss the upcoming round at the same venue next weekend. The Honda side is hurt more as it involves two of their experienced campaigners.

While Crutchlow hurt his wrist in a Warm-Up crash at Turn 8 which even forced him to miss the start of the MotoGP race, Marquez had a mega high-side on the exit of Turn 3 after having recovered at the same corner from falling, earlier in the race.

The reigning MotoGP champion is diagnosed with a fractured right humerus and is to fly to Barcelona for a possible surgery on Tuesday. “Marc Marquez has suffered an injury, it seems, from a direct impact of the tyre to the right arm, resulting in a fracture to the shaft of the humerus, a complete fracture although it isn’t completely displaced, with some possible paralysis of the radial nerve, although we’re not certain.

“This injury has been immobilised here for when they decide to move him to Barcelona to carry out a definitive treatment,” said MotoGP Traumatology Specialist Dr Mir, who will also treat Crutchlow. The extent of damage will be known only then but it puts him in huge doubt for not just the next race but also the ones to come after it.

MotoGP Medical Director Dr Charte added: “Tomorrow Dr Mir will leave for Barcelona to proceed with treatment, if there is no more news regarding the tissue, to surgically treat the humerus. That being said, we can’t say in any absolute terms if he will be at the next race or Brno or Austria. It’s not the moment, we’ll talk about it next week.”

With Crutchlow also in doubt, Honda’s test rider Stefan Bradl is most likely to fill in alongside Alex Marquez, who had an okish start to his MotoGP career in 12th. The British rider explained his side of things after his morning fall.

“Unfortunately this morning in the last lap of the warm-up I crashed going into Turn 8,” said Crutchlow. “It seemed that when I braked on the kerb, the front of the bike slid and I was unable to save the crash.

“What was going to be a normal crash escalated when I went into the deep gravel trap and started tumbling, hitting my head quite a few times, particularly my face. I was a bit dazed after the crash, and a bit sore in my whole body, especially my hands.

“After further assessment at the medical centre I was sent for the CT scan on my head and neck and it all came back fine. With the facial bruising I had, however, Dr. Angel Charté felt I needed eight hours rest, which I think was the right decision.

“When I returned to the circuit I began to feel some pain in my left wrist, so went for another scan of the scaphoid, which it seems has been broken in the crash. Dr. Mir will operate on the wrist in Barcelona on Tuesday morning.

“I will return to the circuit on Friday and hopefully to action. I look forward to seeing the LCR Honda CASTROL Team there, and hopefully to work hard with them again next weekend,” summed up Crutchlow.

Marquez and Crutchlow were not the only riders down as Saturday saw Suzuki’s Alex Rin dislocate his shoulder as well after a heavy fall at Turn 11. He missed the Spanish GP and is hoping himself to return to action but it remains to be seen.

“It’s really disappointing that I suffered this injury because my feeling with the bike had been really good during the whole weekend,” said Rins. “But right now, I need to think about getting well as soon as possible, the doctors will help me with rehab and they have given me some stronger painkillers. I’ll try my maximum to ride next week.”

Dr. Mir added: “After the crash, Alex underwent an MRI scan at the Hospital Jerez Puerta del Sur and this confirmed some injuries such as the muscle and ligament damage, and fracture to the shoulder. Furthermore, he presents an injury in one of the rotary tendons of the shoulder.

“This means it is a multiple injury with a potentially long recovery time. We decided he should not need surgery, and instead he will begin magnetotherapy to reduce the edema. He will also have assisted rehab with electro stimulation in order to try and race next week. We agreed that it will be impossible to race today, and Dr. Charte administered some more powerful analgesics.”

Here’s how the MotoGP Spanish GP panned out