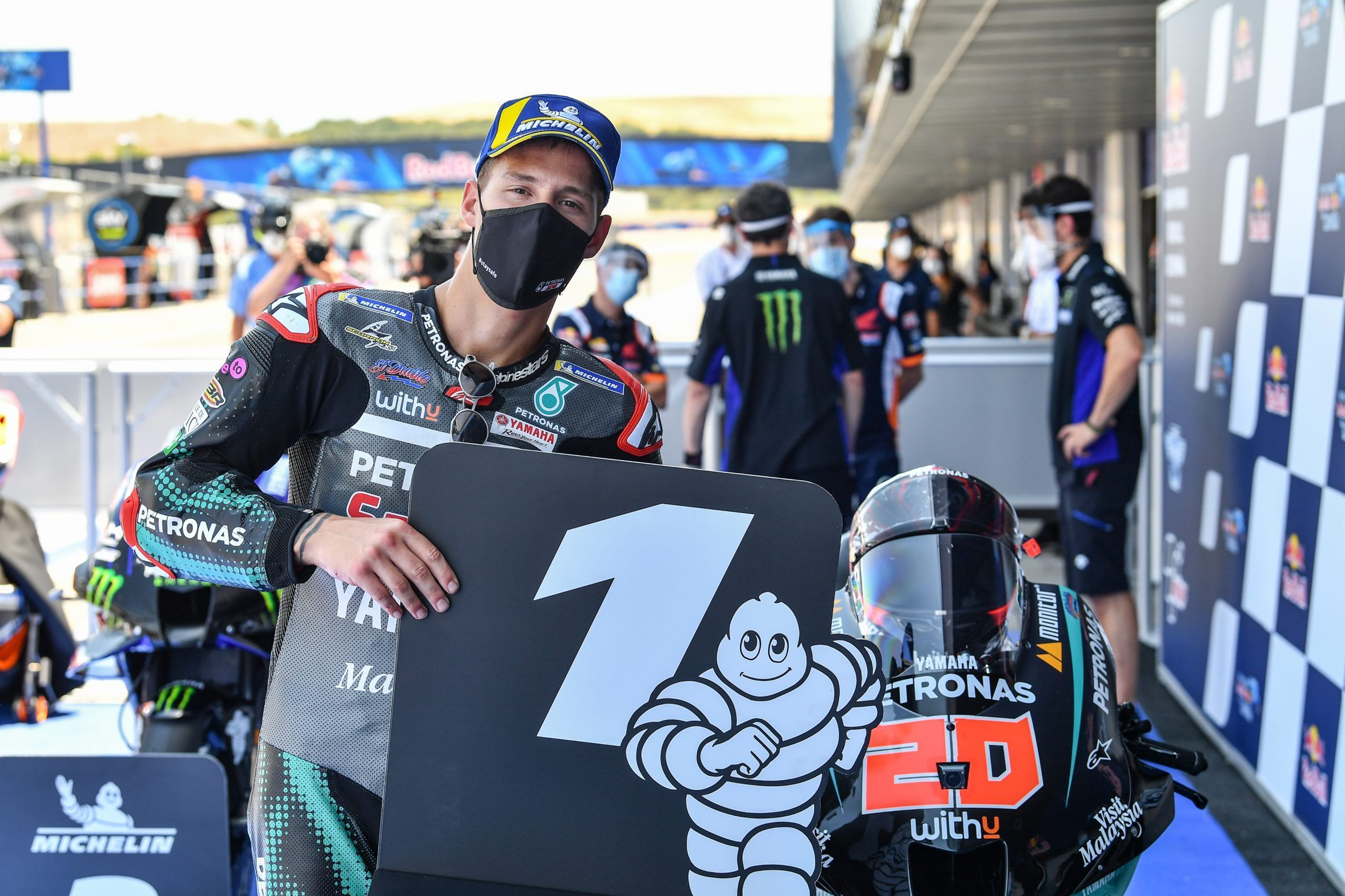 Yamaha’s Maverick Vinales had a supreme start to MotoGP Spanish GP at Jerez to re-start the 2020 season as he led Honda’s Marc Marquez with Pramac Ducati’s Jack Miller getting third from Petronas SRT’s Fabio Quartararo, who dropped to fourth from first.

Vinales and Marquez went head-to-head for couple of laps with the Honda rider getting through to lead MotoGP Spanish GP. But it wasn’t for long as he nearly lost his bike in the left-hander at Turn 4 but saved it and ran through the gravel trap onto the circuit.

Marquez dropped to 16th but re-grouped soon to make it back into the Top 10. He was also helped by crashes for Suzuki’s Joan Mir and Aprilia’s Aleix Espargaro with Binder dropping to last. At the front, Vinales led the way but soon hit trouble.

Quartararo made it past Miller and took the MotoGP Spanish GP lead after Vinales went wide and dropped to third. Bagnaia steadied in fourth from Dovizioso as Espargaro was sixth, Morbidelli seventh, Rossi eighth, Tech 3 KTM’s Miguel Oliveira ninth.

With 10 laps to go, the Top 3 settled down with Quartararo leading Miller and Vinales but Dovizioso and Espargaro got past Bagnaia as Marquez cleared Rossi and Oliveira to get behind the Top 5 pack. There was no looking back for the Honda rider, though.

He made a quick work of Morbidelli and Bagnaia to get behind Dovizioso and Espargaro with the Top 3 in his sight. At the same time, Rossi retired which allows Ducati’s Danilo Petrucci inside the Top 10 with LCR Honda’s Takaaki Nakagami just behind.

At the front, Vinales got past Miller for second as the Australian came under pressure from Marquez, who got past Dovizioso. The Pramac rider resisted but eventually got past from the Honda rider as he lined himself behind the Yamaha.

Drama wasn’t to end as Marquez had a heavy crash at the same corner after a mega high-side, while chasing Vinales. The rear twitched in the previous corner and while going onto the kerb, the bike gave away as he was sent to the medical center.

This eventually helped Quartararo to secure his first MotoGP win in Spanish GP to open the 2020 season to lead a Yamaha 1-2 with Vinales in second. After all the drama, Dovizioso came through to end up third after passing Miller with two laps to go.

The Australian and Morbidelli collided with the Italian just managing to hang on the bike but he was passed by Espargaro. He, however, re-passed the KTM rider to be fifth with Miller in fourth and Bagnaia in seventh.

Oliveira did well to be eighth from Petrucci and Nakagami as Avintia Ducati’s Johann Zarco was 11th as Honda’s Alex Marquez had his first MotoGP points in 12th with Binder recovering to 13th, Avintia’s Tito Rabat 14th and Aprilia’s Bradly Smith 15th.