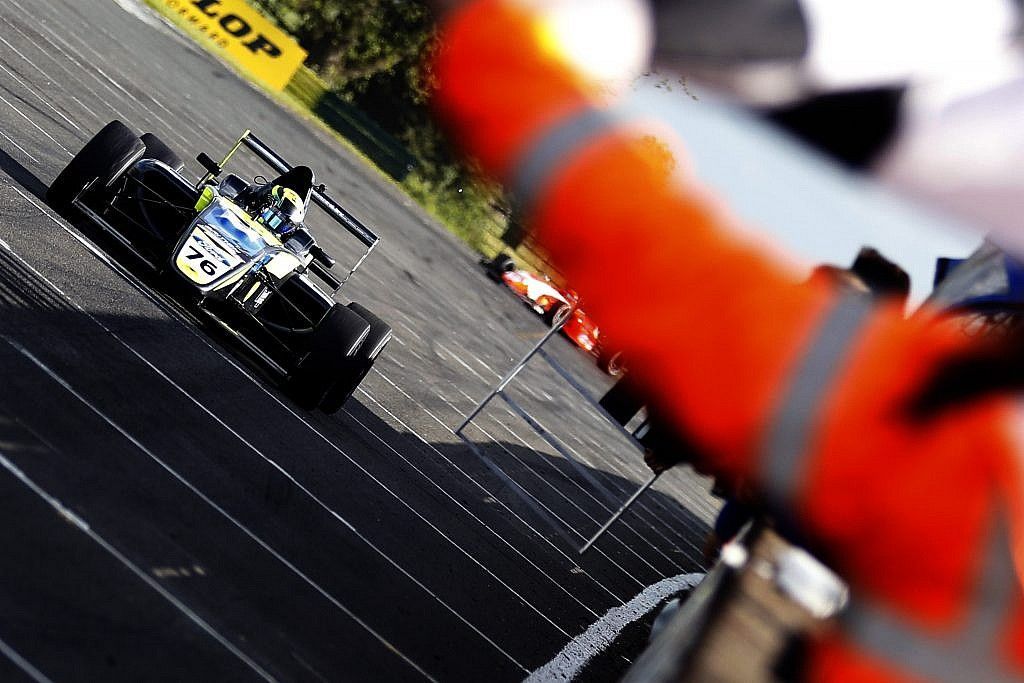 Linus Lundqvist and Double R Racing claimed another flawless lights to flag victory at Croft in the final race of the weekend in the F4 British Championship certified by FIA – powered by Ford EcoBoost.

A perfect start from pole saw Lundqvist lead comfortably into turn one after which the Swedish single-seater champion effortlessly pulled a gap to the chasing pack on his way to victory. He recorded the fastest lap of the race, a time of 1m 21.444s, on lap four and then proceeded to lap consistently in the 1m 21s. A pace that could not be matched by the rest of the field with no other driver managing to lap below 1m 22s mark.

Alex Quinn was another fast starter, leapfrogging team-mate Oscar Piastri and Jamie Caroline, by scything down the inside of them through turn one. Caroline found himself defending a two-pronged attack from the TRS Arden pairing and as he fended off Piastri, Quinn found enough space to pass them both. Piastri maintained the pressure through Hawthorn and Caroline ran off the track through the Chicane, losing ground and giving Oscar the opportunity to go by.

Caroline’s excursion at the chicane immediately left him having to defend from Karl Massaad who hustled the Carlin driver in first part of the race, getting a better exit out of Sunny on lap six to take fourth place, with Caroline increasingly susceptible due to a technical gremlin.

However, the championship leader did well to hold onto fifth, keeping a hard charging Logan Sargeant at bay who had climbed several places up the order during the race. The highlight a perfectly judged move down the inside of Simmons for sixth.

Simmons pulled off some deft overtaking manoeuvres himself, namely on Oliver York late on with a daring late lunge at Tower. Although this relegated York to eighth ahead of Patrik Pasma, York took another Ford F4 Challenge Cup win just hours after standing on the top step in the class podium celebrations in race two of the weekend. The Challenge Cup podium was identical to the earlier race with Harry Webb (Richardson Racing) and Hampus Ericsson (Fortec Motorsports) taking second and third.

Olli Caldwell just missed out on a Challenge Cup podium on his debut weekend despite a superb effort on track in only his second British F4 race. It featured some excellent wheel-to-wheel racing from the birthday boy, coming out on top heading into Clervaux on lap two having been three abreast with Lucas Alecco Roy and Daniel Cao. Caldwell then set his sights on Ericsson and Jamie Sharp, the trio jostling for position with Roy and Liu getting in on the act to make for a thrilling battle.

The F4 British Championship certified by FIA – powered by Ford EcoBoost now heads into its annual summer break, with the action set to continue at Snetterton on 29/30 July, 2017. Carlin’s Jamie Caroline will defend a 67.5 point lead from Piastri, with Lundqvist just 18 points further back in third.