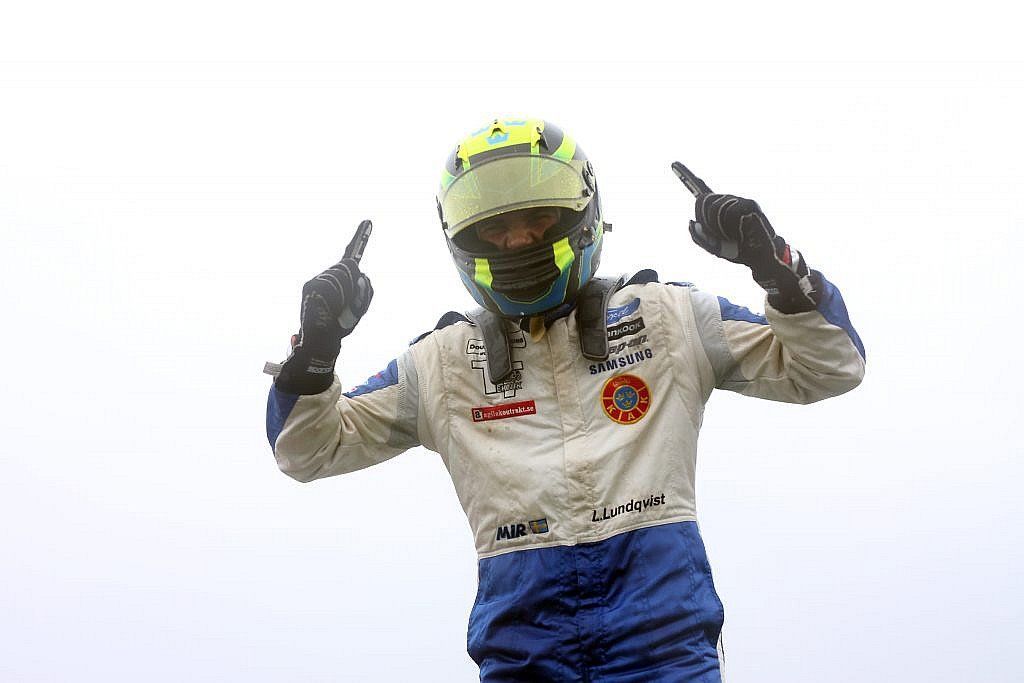 Linus Lundqvist converted pole to victory at Croft in Round 13 of the F4 British. The Double R ace has been in fine form this weekend, topping every session in the run up to the opening race and he duly delivered to take his second win of the campaign.

A perfect getaway in slippery conditions and excellent opening lap saw him immediately build a gap of over two seconds, but it was wiped out due to team-mate Karl Massaad having an off at Tower which brought out the safety car.

Lundqvist was flawless once again at the restart and scampered off into the distance, building a gap of almost seven seconds by the time the chequered flag fell.

Behind Lundqvist could be found fellow front row starter Oscar Piastri who despite significant pressure from the fast-starting Logan Sargeant was able to keep his fellow F4 UAE graduate at bay. It earned him his sixth trip to the podium this season. The most of any driver, with the exception of championship leader Jamie Caroline who finished behind Sargeant in fourth.

Caroline made up six places on the opening lap from 12th on the grid, having been demoted ten places courtesy of taking his penalty from Oulton Park. The Carlin ace then passed Alex Quinn and Harry Webb after the safety car period to complete the damage limitation drive.

The TRS Arden duo of Quinn and Ayrton Simmons ultimately got the better of Harry Webb who made a storming start, making up four places from ninth on the grid on his way to his third Ford F4 Challenge Cup win of the season. The Richardson Racing driver revelled in the wet conditions, perfecting the restart to get the run on Quinn down the main straight and pull off a move into turn one.

However, Webb came unstuck later in the race at the chicane, losing momentum as he travelled through the grass. It enabled Caroline and Quinn to sail past, while Simmons seized his opportunity by pulling off a brave move around the outside of Webb at Tower.

Patrik Pasma continued his fine point scoring run to bring his Carlin-prepared car home in eighth ahead of Oliver York (Fortec Motorsports) and Jamie Sharp who recorded another points finish for Sharp Motorsport. A feat made all the more impressive given that he missed free practice one on Friday due to sitting a GCSE exam.

Lucas Alecco Roy looked on course to finish well inside the top 10, making up three places on the opening lap to run in seventh. However, an off at turn one on lap six scuppered his chances.