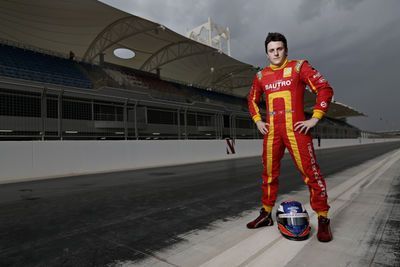 After dominating Friday morning practice by over a second from his nearest competition, qualifying was all about whether Racing Engineering’s Fabio Leimer could repeat that great performance a second time in the afternoon – or whether anyone could come in order to challenging him for the feature race pole position.

Trummer’s first flier was 1:40.892s, already immediately faster than Leimer’s Friday morning practice time and four tenths faster than Jolyon Palmer in the Carlin, thanks to a track cleaned up and rubbered-in by the preceding GP2and F1 practice sessions during the day and because the drivers were also out on their soft-option tyres which promised faster lap times but only one effective lap per set.

Stefano Coletti soon went four-hundredths of a second faster than his team mate to take provisional pole, but he was quickly deposed by Marcus Ericsson posting 1:40.420s in the DAMS and then by Leimer making his presence felt by beating them both to go top with a time of 1:40.044s, easily a new lap record on the 3.363-mile, 15-turn Bahrain International Circuit in Sakhir. Could anyone improve on that for the remainder of the session? It already looked less than likely.

GP2 newcomer Alexander Rossi continued to impress on his series début by slipping the Caterham into third place ahead of Coletti, although he was deposed a spot just before the mid-session lull by Felipe Nasr in the Carlin. ART’s James Calado rounded out the top six at the midway point, although he was working under the cloud of having to serve a ten-spot grid penalty tomorrow held over from his early sprint race accident at Malaysia.

Rapax duo Coletti and Trummer were among a small group to return to the track early while it was still relatively clear, sporting their second set of yellow-walled soft option tyres. Trummer squandered his by massively misjudging his line through the final corner, while Coletti’s own run improved his time but only by enough to put him back up a place into fourth ahead of Rossi. The two then had no more soft tyres to throw at the problem and watched the rest of the session from the pit wall, their work done for the day.

A fabulous late flying lap from the second new boy in the GP2 paddock this weekend, Hilmer Motorsport’s Robin Frijns, put the Sauber F1 test and reserve driver into the top six. That was just before Mitch Evans found his Arden sporting a box full of neutrals forcing him to pull over and park on the gravel run-off area, but fortunately the reigning GP3 champion sensibly found a suitable place to do so that allowed qualifying to continue without any waved yellow flags interfering.

Those who had left their final fliers until the last minute found some of the best track conditions of the day, with Stéphane Richelmi jumping up to sixth place in the DAMS with a couple of minutes to go and Adrian Quaife-Hobbs soon up to seventh despite a lock-up on his own effort; both were pushed back down a place by an impressive late effort from Russian Time’s Tom Dillmann, which put the Frenchman into fifth place as time ran out on the drivers.

Ericsson looked on course to challenge for pole position with his final run, but backed off after losing time in the second sector of his qualifier. That left only Fabio Leimer with a chance to go faster still, and the Swiss driver – who turned 24 just two days previously – duly obliged: even though his provisional pole was now now longer in doubt, he smashed it to pieces anyway with his final run of 1:39.427s as the 30-minute session came to a close.

That had wiped the floor with the rest of the field, again around a second (0.993s to be precise) ahead of the second place man. Marcus Ericsson wound up as the best of the rest and will start alongside Leimer on the front row tomorrow ahead of Nasr and Coletti on the second row, with Dillmann and Richelmi on thee third. Rossi finished in seventh place just ahead of Quaife-Hobbs, with Sam Bird managing a late surge for Russian Time to edge Frijns back to tenth place.

Meanwhile James Calado ended up in 11th position, which when his Malaysia penalty is applied means he will line-up in 21st place on the grid for Saturday afternoon’s feature race.