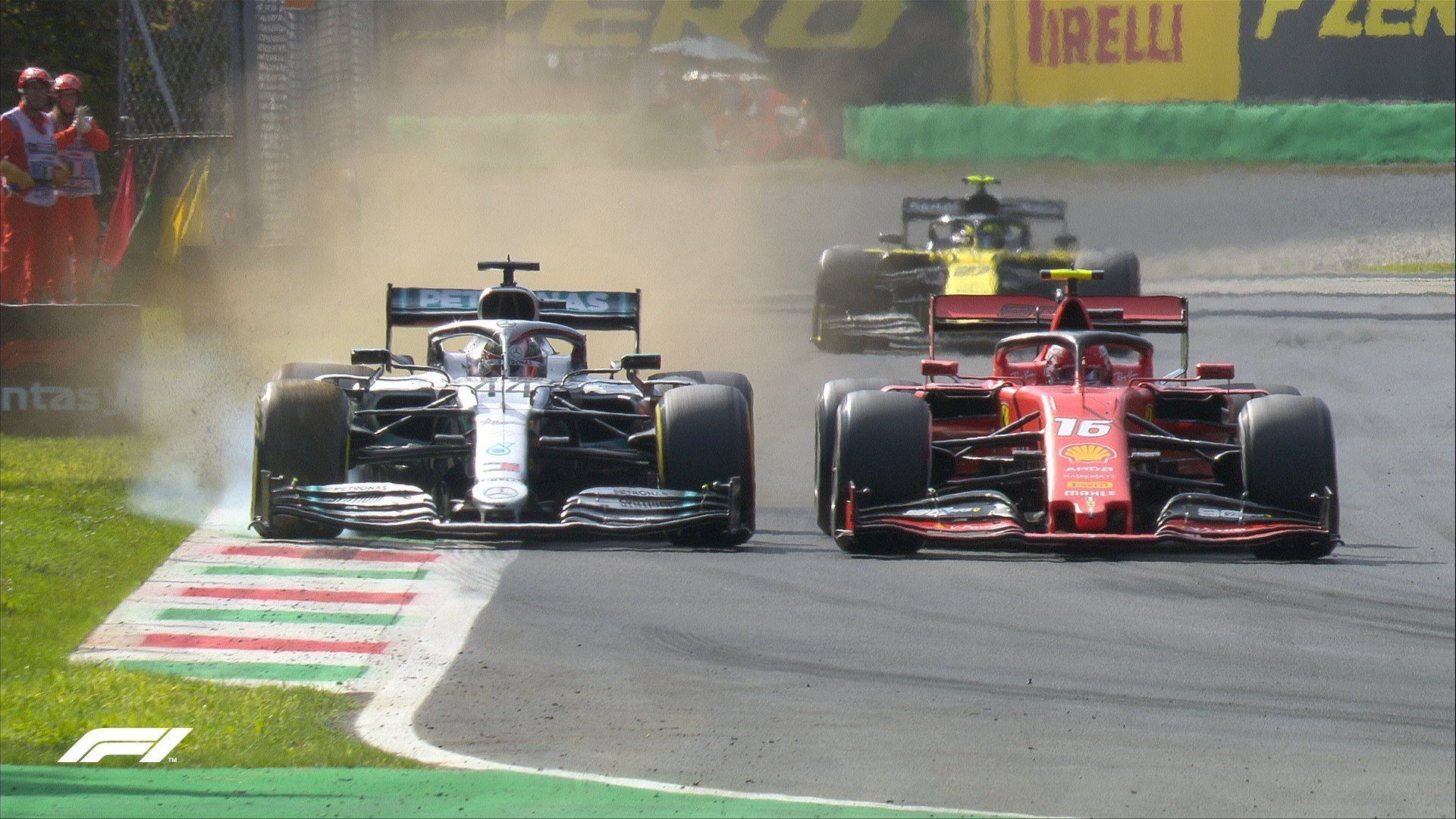 Ferrari’s Charles Leclerc says he thought there was a car’s width left while fighting Mercedes’ Lewis Hamilton in F1 Italian GP amid debate on new black and white flag ruling.

Leclerc, who scored Ferrari’s first F1 Italian GP victory in front of the tifosi at Monza since 2010, had squeezed Hamilton on the outside on their approach to Turn 4-5 during race-long their battle.

The critical encounter resulted in the Mercedes driver having two wheels on the grass area while he was attempting a move on Leclerc but the move forced Hamilton to take the run-off at Variente della Roggia instead.

The Monegasque driver was waved a black-and-white flag during the race to warn him of driving standards, something which the FIA is trying to show to drivers instead of handing out penalties when it is not too severe.

Post his race win, Leclerc said in the press conference that he thought he had left enough space for Hamilton but it wasn’t the case entirely and that he hadn’t seen the images to comment extensively.

“To be completely honest, obviously I knew he was on the right, he braked a little bit early which I think was probably on purpose because he didn’t’ want to try around the outside and I thought I had left a car width,” he said.

“I haven’t seen the images to be honest. But I was pretty sure there was a car width.” He insisted that his only aim is to race harder, something which he learnt after Austria, so his approach is clear.

“I think since Austria it’s clear that we can go a bit further in the way that we defend and overtake and just the aggressivity of us drivers,” he said. “I believe that Austria helped me to change this approach.

“It’s also thanks to this that I’ve managed to win. It was obviously very on-the-limit but I’m happy to race like this.” This didn’t set that well with Hamilton, even though he was fine with Leclerc per say.

He more questioned the stewards for not taking action like last year with Max Verstappen and Valtteri Bottas. He is also not too clear on the black and white flag thing for now.

“We’ve just constantly asked for consistency,” he said. “So, there was a rule put in place, and then it wasn’t abided by in Monza and they used difference consequences for the rule.

“But I don’t really know why that was the case. It’s motor racing, I guess, and I guess the stewards woke up on a different side of the bed this morning. Verstappen should have got the black and white flag last year.

“We’ve asked for consistency. So, the same rule should apply each time. You see, I had to avoid colliding with him a couple of times but I guess that’s how the racing is and you just move forwards. I’m not unhappy.

“I just don’t like to go backwards but Charles did a fantastic job. I gave him as much pressure as I could and we had a couple of close moments, we could probably talk about it in private together.

“But it’s nothing major and we continue to race. I’m looking forward to many more races together.” The fight between Leclerc and Hamilton became a talking point with the former being questioned more.

However, as was made clear from Leclerc in his answers, the Monegasque is not going to sit back and let others pass him just like that. The aggression, probably earned him a back-to-back F1 victory.