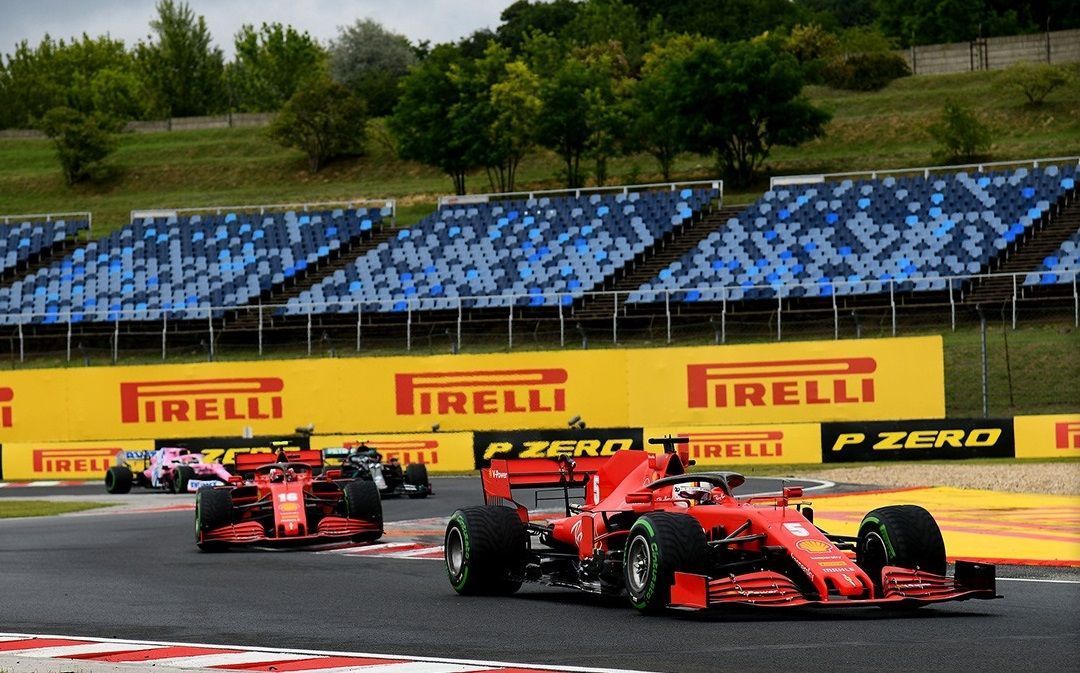 For Ferrari, the F1 Hungarian GP weekend was another one to forget, with their cars finishing sixth and 11th for Vettel and Leclerc respectively – the latter of whom finished behind even one of the Haas drivers, who of course are their customers.

A lack of raw pace played a role, but arguably more so, poor strategic decisions plagued the team’s race – especially Leclerc – it being one that had the potential to be an improvement on the last two at the Red Bull Ring.

In the race, Ferrari opted to put Leclerc on the soft tyres early on when switching to slicks. It proved to be an unwise call, as the medium compound were favored, and it ultimately disadvantaged the Monegasque greatly in the tight mid-field fight.

Leclerc still had some good battles, especially against the McLaren drivers, where he won against Lando Norris but lost out to Carlos Sainz. Post-race, the Monegasque rued the strategy call, as he detailed the struggles he faced with his troublesome SF1000.

“It was disappointing but this is what we have at the moment to work with,” said Leclerc. “To be honest, there was something wrong in the race, it didn’t match with the car which we had in qualifying or even before in the practice. We didn’t changed much.

“The car was not good to drive on my side. We need to look further into that to try and understand, as I was struggling a lot. We stopped for softs a bit earlier than others and maybe it was a bit too optimistic. But it was a good call at that time.

“I managed a few quick laps, but there was only one dry line so I could not overtake and, with hindsight the soft was not the best choice. After that we were just slow. There’s lot of work ahead of us,” summed up Leclerc, who now has two non-points finishes in two races.

Having seen the undesirable behaviour of the softs on long runs during Friday’s running, Leclerc Ferrari teammate Vettel made sure that he wouldn’t be stuck on them in his race, and specifically requested that he not be put on them – a call that seemingly prevented his day from descending into one of damage limitation.

The Ferrari driver was happier with his day when compared to his teammate, but did regret not pitting for the dry tyres earlier in the race. “This was a better performance compared to my first race in Austria,” said Vettel. “However, in the early stages we might have done a bit better if I’d taken more of a gamble and come in for dry tyres on lap 3 instead of 4.

“As it was, I lost a lot of time, having to let other cars come down pit lane before I could be released. But in the end, fifth or sixth was the most we could have done. Towards the end, I was struggling with the tyres and even if I would have loved to have put up more of a fight, there wasn’t much I could do to keep Alex behind me.

“We are not where we want to be just now, but at least we did everything we could. It was back to normal, obviously, Austria 1 was the outlier and Austria 2 didn’t happen and now we are here. I think this is where we would finish in fifth or sixth but not further up.”

The German also had a some fine battles like Leclerc, which including multiple with Red Bull’s Alexander Albon as he mentioned. Ferrari boss Binotto, meanwhile, labelled the result one that was ‘tough to swallow’, as he acknowledged that the lapping of both cars by leader Lewis Hamilton was particularly telling of their troubles.

The Italian also put confidence in his team and shot down stories of his sacking which is doing rounds. “An extremely disappointing Sunday and the result is very hard to swallow,” said Binotto. “In qualifying, we had got the most out of the car as it is at the moment, but in the race that was not the case. To be lapped is very painful for us and our fans.

“Everyone will have to analyse their work and have the courage to change course if necessary, because the current dynamic is unacceptable. There is no other solution to fix this situation. As we know, the entire car project has to be revised, while taking into consideration the limits currently imposed by the regulations.

“I am well aware there is no magic wand in F1, but we have to step up a gear to turn things around, both in the short and the long term. It might also be necessary to look at our organisation to improve and strengthen our working methods where the need is greatest. But first, as a team, we need to understand the dynamic that led to this situation.

“I have confidence in the people who work in the Gestione Sportiva: we have started out on a long process that should lead to another winning cycle. It will take a while, but the whole company understands and supports this vision. That’s why I find it amusing to read some stories that are doing the rounds: it’s not by sacking people that you make a car go faster,” summed up Binotto.

Here’s what Sebastian Vettel said regarding his future