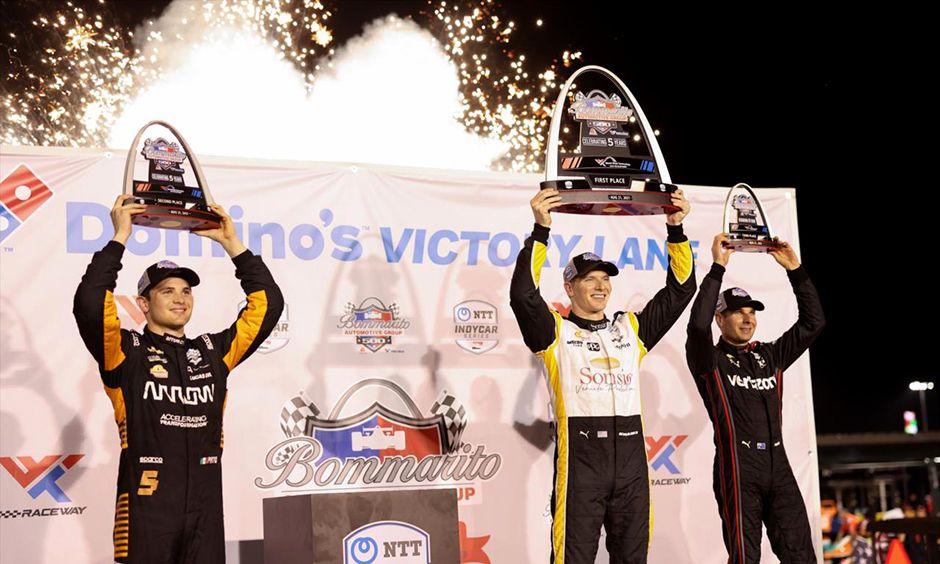 Josef Newgarden earned his second victory of the season by winning the Bommarito Automotive Group 500 presented by Axalta and Valvoline on Saturday night at World Wide Technology Raceway in a race that shuffled the NTT INDYCAR SERIES championship deck.

Newgarden drove his No. 2 Sonsio Team Penske Chevrolet to victory by .5397 of a second over Pato O’Ward’s No. 5 Arrow McLaren SP. O’Ward didn’t enter Victory Lane, but he also was a big winner of the night by taking the championship lead by 10 points over Alex Palou, who placed 20th after being eliminated in a three-car accident early in the race.

Two-time series champion Newgarden leaped from fourth to third – 22 points behind O’Ward – with his third career victory on this 1.25-mile oval and his 20th overall career win. He averaged 135.245 mph, leading 138 of 260 laps in the final oval race of the season.

There are three races remaining in the season, all on road and street courses on consecutive weekends in September on the West Coast. The next event is the Grand Prix of Portland on Sunday, Sept. 12 at Portland (Oregon) International Raceway.

O’Ward used smart aggression all night to avoid incidents that triggered six caution periods, including five in the first 65 laps. He scored his eighth top-five finish in 13 races this year. NTT P1 Award winner Will Power finished third in the No. 12 Verizon 5G Team Penske Chevrolet, and Scott McLaughlin gave Team Penske three of the top four finishing positions by placing fourth in the No. 3 DEX Imaging Team Penske Chevrolet.

Sebastien Bourdais finished fifth, tying a season best, in the No. 14 ROKiT/AJ Foyt Racing Chevrolet. Formula One veteran Romain Grosjean finished 14th in his oval racing debut in the No. 51 Nurtec ODT Honda, completing 259 of 260 laps.

Newgarden took the lead for good under caution on Lap 203 when Bourdais, on a different fuel strategy from other lead cars, entered the pits for his final stop. Newgarden maintained a gap anywhere from seven-tenths to one second over O’Ward after the restart on Lap 210.

O’Ward closed to within a half-second in the closing five laps but ran out of time to challenge Newgarden for victory. The complexion of the championship race changed dramatically on Lap 65 during a restart, when six-time and reigning series champion Dixon, Palou and Rinus VeeKay were involved in a crash in Turn 1.

VeeKay’s No. 21 Sonax/Autogeek Chevrolet hit the rear of Dixon’s No. 9 PNC Bank Grow Up Great Honda at the apex of Turn 1 in a thicket of traffic during the restart, sending both cars into a spin into the SAFER Barrier. VeeKay’s car collected Palou’s No. 10 The American Legion Honda en route to the wall, eliminating Palou in 20th and VeeKay in 21st.

Palou had climbed into 10th place after starting 21st due to a nine-spot grid position penalty because of an unapproved engine change after the Big Machine Spiked Coolers Grand Prix last Saturday at Indianapolis Motor Speedway.

Dixon’s Chip Ganassi Racing crew repaired his car, and he returned to the race to try to gain points. Dixon dropped out late in the race in 19th place, 160 laps down. He dropped to fourth in the standings, 43 points behind O’Ward.

It was the first time Dixon failed to finish a race since this event in August 2019, ending a streak of 28 consecutive races running at the finish. Marcus Ericsson finished ninth in the No. 8 Huski Chocolate Chip Ganassi Racing Honda to stay fifth in the standings and keep his championship hopes flickering, 60 points behind leader O’Ward.

Andretti Autosport’s tough season continued with more heartbreaking misfortune. Colton Herta entered the pits in the lead on Lap 186, but the driveshaft broke in his No. 26 Gainbridge Honda as he exited the pits, ending his night. He was credited with 18th place after leading 101 laps, second only to Newgarden.