The 2018 Formula 1 Hungarian GP wasn’t a blinder but it was intriguing how the different strategies were played out in the 70-laps race as Mercedes’ Lewis Hamilton took the win.

The British driver started on pole and went on to win the Hungarian GP to build a 24 points advantage over second placed Ferrari’s Sebastian Vettel, heading into the summer break. The German looked good to take the fight to Hamilton at one stage.

However, he was stuck behind Valtteri Bottas for too long to take any advantage of his different strategy, thus ending second with Kimi Raikkonen scoring yet another podium. Red Bull Racing’s Daniel Ricciardo was fourth as Bottas was demoted to fifth.

How did the weekend pan out statistically? Here’s some of them: 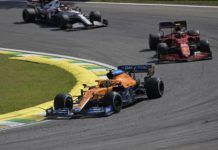