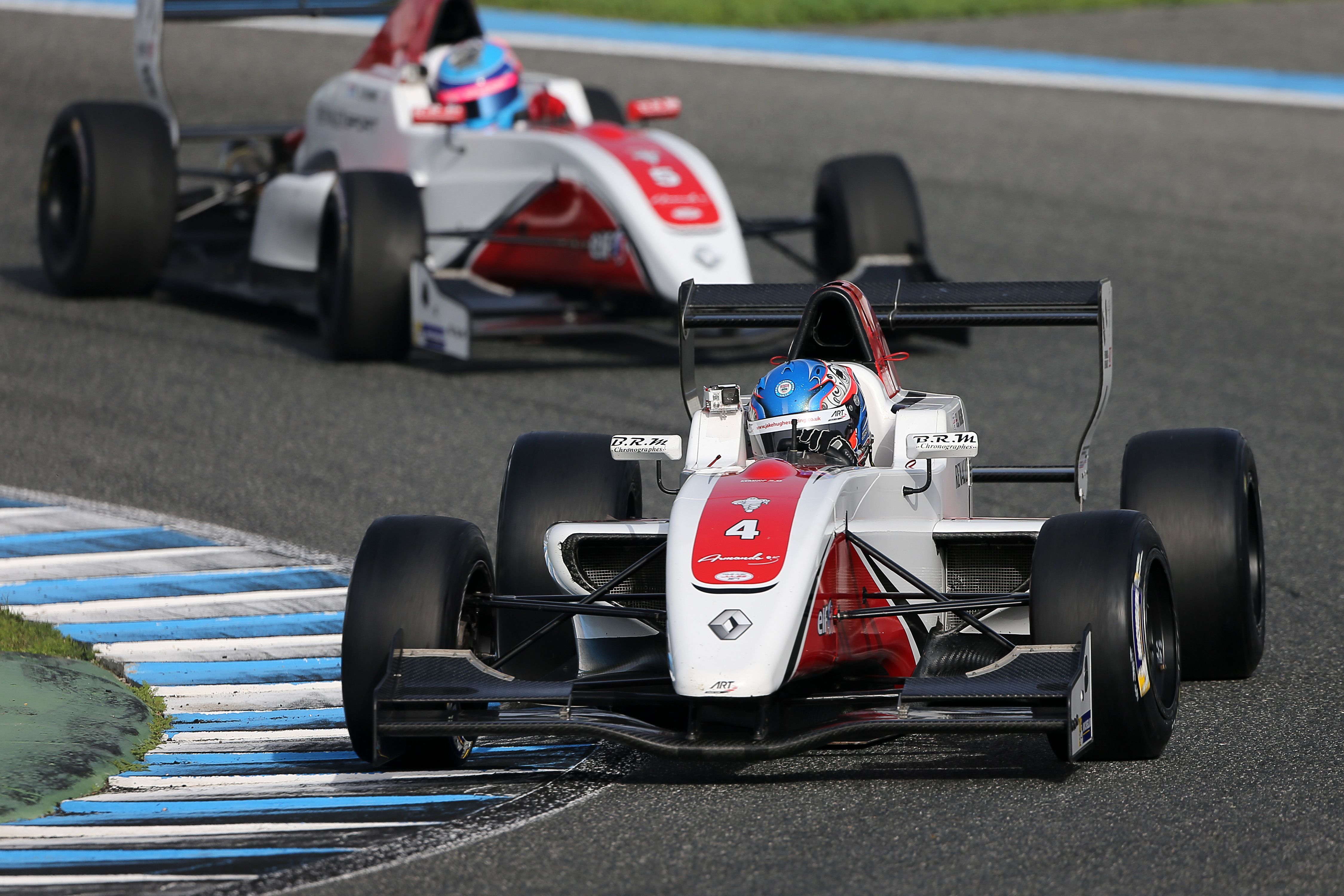 28 Eurocup Formula Renault 2.0 drivers were on hand this Monday at the Circuito de Jerez for the final official collective test day of the year. In a field composed of drivers with experience in the category and hopefuls invited by Renault Sport Technologies, Jake Hughes (ART Junior Team) set the best time of the day with a lap of 1:41.044 this morning. The Englishman led from Seb Morris (Manor MP Motorsport) and Dennis Olsen (Strakka Racing). Lotus F1 Junior Team member, Dorian Boccolacci (Prema Powerteam), was quickest among the rookies.

The day after the season-finale of the Eurocup Formula Renault 2.0, the teams returned to the Andalusia track. Among the drivers invited by Renault Sport Technologies, we find Dorian Boccalacci, currently second in the French F4 Championship, Joonas Lappalainen (Koiranen GP), the Formula Renault 1.6 Nordic champion as well as Anton De Pasquale (Josef Kaufmann Racing), who won the Formula Renault 1 .6 NEC Junior title this past weekend.

After the opening of the session fought out between Callan O’Keeffe (Prema Powerteam), Seb Morris, Jake Hughes and Patricio O’Ward (AVF), Jake Hughes got the upper hand. The Englishman improved to a best time of 1:41.044. At the end of a session marked by two red flags, he finished atop the order ahead of Callan O’Keeffe, Pietro Fittipaldi (Fortec Motorsports), Patricio O’Ward and Louis Delétraz (Josef Kaufmann Racing).

In the afternoon, Paul Hökfelt (Tech 1 Racing) was first to set a reference time. Louis Deletraz, Callan O’Keeffe, Jake Hughes, Dennis Olsen and Seb Morris all had their turns at the top of the order. And it was Seb Morris who at the end of the day was quickest in the session with a time of 1:41.634 followed by Jake Hughes and Dennis Olsen.

Among the invited rookies by Renault Sport Technologies, Dorian Boccolacci was quickest in the morning ahead of Felix Hirsiger (ART Junior Team) and Ralf Aron (Prema Powerteam). During the second session, Dorian Boccolacci did it again and ended Monday with the best rookie time of the day; followed by Joseph Mawson (Fortec Motorsports) and Anton de Pasquale.

Jake Hughes: “The day went very smoothly. We set best time in the morning and the second best in the afternoon, while we tried different set-ups. I made a few mistakes on my last lap, which cost me at least 2/10ths but leading the day by nearly 6/10ths is pretty good.”

Anton De Pasquale: “It is a very different experience than the Formula Renault 1.6, but I really like it. The difference in speed in the corners, the aerodynamics and grip is big but it makes the driving more enjoyable. Thanks to Renault and Josef Kaufmann Racing for this opportunity.”

Dorian Boccolacci: “This morning, I had to re-learn the circuit as the Formula Renault 2.0 changes the reference points, between the speed, the two extra gears and the aerodynamics. The most impressive difference is the cornering speed, the pressure that you can apply to the brake pedal and the tyres as a little time is needed to put in a lap time. I finished sixth this afternoon, behind the drivers who already have a year in the category!”

Joonas Lappalainen: “The plan was to adapt to the car, as it was my first proper test in 2.0. I’m not totally satisfied, but I couldn’t do much more. I think it is due to my inexperience because the Formula Renault 1.6 and the Formula Renault 2.0 are driven differently.”