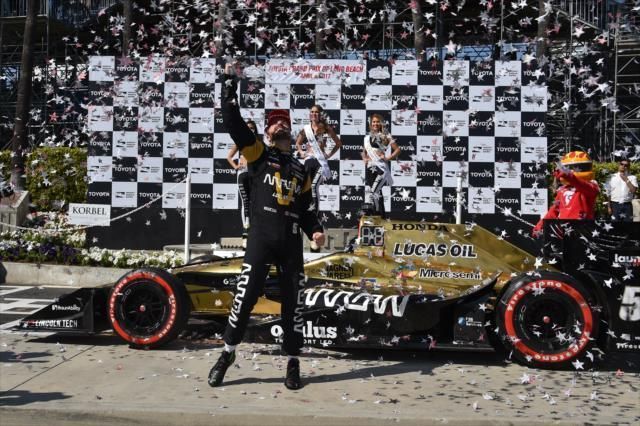 Push-to-pass parameters: 200 seconds of total time with a maximum time of 20 seconds per activation.

* James Hinchcliffe completed the story of his comeback from serious injury claiming his first win of the season – and first since his 2015 injury – at the Toyota Grand Prix of Long Beach on April 9. The Canadian, who made his Verizon IndyCar Series debut at Barber in 2011, trails four-time Indy car champion Sebastien Bourdais by 19 points for the championship lead heading into this weekend’s race.

* The Honda Indy Grand Prix of Alabama will be the eighth Verizon IndyCar Series event conducted at Barber Motorsports Park.

* Helio Castroneves, Will Power, Ryan Hunter-Reay, Josef Newgarden and Simon Pagenaud are the only drivers to have won at Barber Motorsports Park. Castroneves won the inaugural race in 2010, Power won the race in 2011 and 2012, Hunter-Reay in 2013 and 2014, Newgarden in 2015 and Pagenaud in 2016.

* Scott Dixon has finished on the podium in six of his seven previous starts at Barber Motorsports Park – including four runner-up finishes – but he has yet to finish on the top step of the podium at the picturesque road circuit – one of the five tracks on the 2017 schedule where he has raced more than once and hasn’t won. Dixon is fourth on the all-time Indy car victory list with 40 wins.

* Rookies Ed Jones and Zach Veach and second-year competitor Spencer Pigot will race Verizon IndyCar Series cars at Barber Motorsports Park for the first time this weekend. Jones and Pigot, the last two Indy Lights champions, have competed at the circuit in the Mazda Road to Indy, as did Veach, who will make his Verizon IndyCar Series debut as a substitute for JR Hildebrand, who sustained a broken bone in his left hand in a last-lap crash April 9 at Long Beach.

* Kanaan seeks to start his 268th consecutive race this weekend, which would extend his Indy car record streak that began in June 2001 at Portland. Teammate Dixon has made 209 consecutive starts heading into the weekend, which is the third-longest streak in Indy car racing.

* Since 2012, the Verizon IndyCar Series has averaged 8.75 different race winners per season, including a record-tying 11 winners in 2014. There were eight different winners in the 16 races of 2016 with an equally tight competition projected for the 2017 season.

* Drivers may engage their “push-to-pass” for a total of 200 seconds during the race, with a maximum duration of 20 seconds for any one activation. The push-to-pass is not available on the initial race start or any restart unless it occurs in the final two laps or three minutes of a timed race. The feature increases the power of the engine by approximately 60 horsepower for 2017.