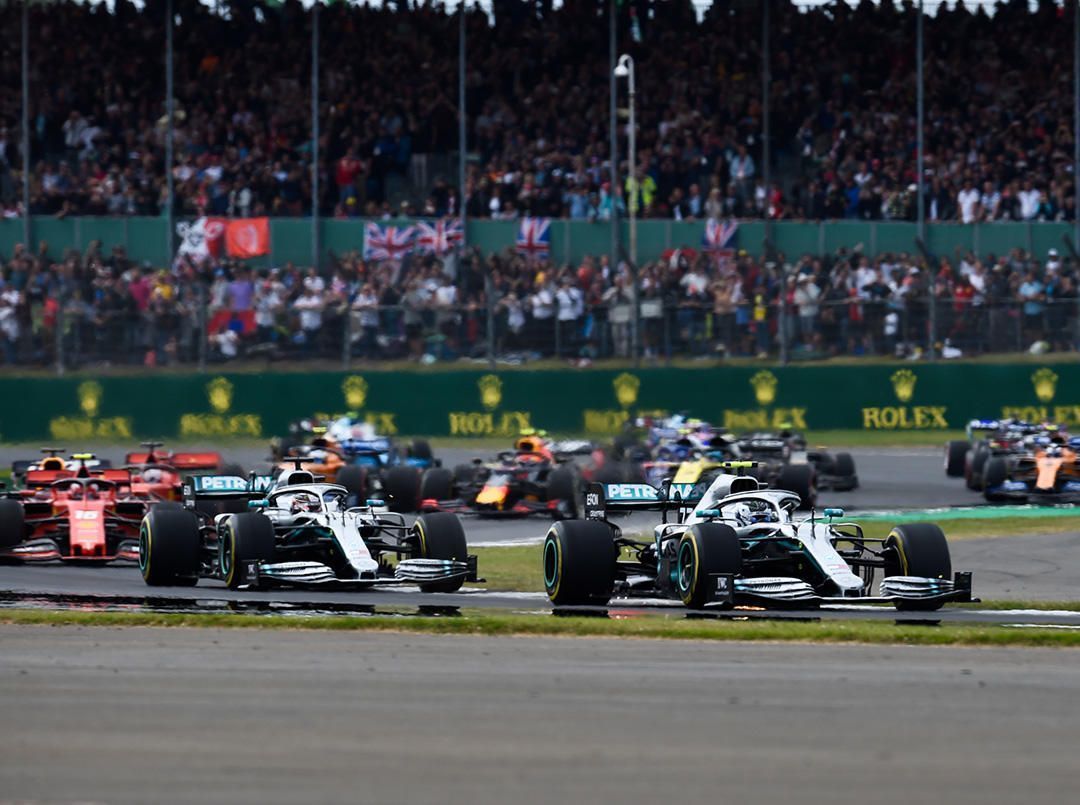 Mercedes’ Lewis Hamilton says the fight against Valtteri Bottas was enjoyable as he explains the idea behind switching his strategy in F1 British GP.

Bottas made a good start in F1 British GP from pole at Silverstone as several attempts from Hamilton did not pay off on the opening lap. The British racer stayed on the Finn’s tail and eventually made it through but Bottas was quick to retake the lead.

Hamilton continued to pile the pressure on Bottas but the Finn eventually managed to break away and it looked sorted for them to be on a two-stop strategy. However, Hamilton went deep with an idea to try and do a longer stint and see how it works.

To his fortunate luck, Alfa Romeo Racing’s Antonio Giovinazzi was beached at Club corner which required a safety car period. Hamilton got a free stop as he converted to a one-stop, while Bottas was already committed to a two-stop in a dire situation for him.

That sealed the Finn’s race as Hamilton took a record-breaking sixth British GP victory and extend his championship lead to 39 points with 10 races in the bag. The brief fight was enjoyable though for Hamilton, even though Bottas came out on top.

“You never know if you are really going to be able to deliver a day like Sunday but me and Valtteri had such a good fight,” he said. “I got him at Turn 7 and then he was on the inside but when we pulled out of the corner I couldn’t really see where he was.

“He was in my blind spot. He wasn’t in my mirror but I couldn’t see him next to me either, so I couldn’t close the door, just in case he was there and he happens to be there obviously. He drove sensationally well there. So I was, ‘OK, I’ve got to back off.

“And wait until he stops and then nail it after that’. It’s no secret that Valtteri wants to beat me and I want to beat him and that fighting spirit is stronger than anything, individually for all of us. I think it’s so vital though, to have a respect.

“I know how hard is it to get a pole here. He did a fantastic job on Saturday, I know how hard it is to wake up and deliver every weekend, as do these other drivers, so the respect is there between us. I think we want to race wheel-to-wheel and tough.

“When you’re racing with a team-mate it’s on a different level. If I were racing a Ferrari, you take more risks. Still respectful, but you can lean on them a bit more but as team-mates, we sit down at the beginning of the race, we talk about Turn 1.

“And how we’re going to respect each other, make sure we don’t collide, and even when I overtook him and he was coming back, I could have swept across the front and blocked him  – but that’s not the right thing to do. Ultimately it enabled him to get back past.

“But that’s racing. It was really fair, and it was great. Honestly, I was looking forward to maybe some racing later. I was extending that first stint and he was doing some good times so the gap was growing, in terms of me coming out maybe one second, one-and-a-half seconds to two seconds.

“I was trying to keep it as little as possible before I finally stopped so that, so that when I came out, I had the advantage on a new tyre and could finally catch him up and try to get past – but the Safety Car came out and kind of intervened. But that was awesome.”

Speaking about the strategy change, the idea wasn’t for one-stop as majority thought it will be risky despite having the hardest tyres available. Hamilton tried to extend his stint but the safety car eventually helped his cause to make the switch.

“It’s very difficult for a team – because we are a team – but then individually we want to win. So the team has to do the best and most balance approach for both of us. Most of the simulations come out with ultimately the first car.

“If you do a good enough job in qualifying, the first car generally gets priority etc and it gets quite hard to overtop that, unless you do it on track, or undercut and those kind of things. We had discussed a lot and I think the fastest way to the end of the race was Medium-Medium-Hard – but there were alternative strategies.

“That was something I looked into, and I had already decided at the beginning of the race that I was going to take the medium in the middle stint and extend my first stint to 20 or 21 – whatever it was. Did I know that we were going to stay on the one-stop? No.

“But, we have to be strategists, almost, a little bit inside ourselves, and it something we’re constantly working on, trying to finesse, because it’s always different. There’s always new figures that have to be put in, from each race, and no-one ever gets it perfect.

“But the cool thing is that it enabled us to race. What they probably didn’t expect is that we were going to push so much at the beginning. I think we were expected to save our tyres and stuff – but we were racing pretty hard – which is how racing should be.”

Bottas, on the other hand, conceded the mistake to rule out the possibility of a one-stop strategy. The Finn said the discussion was made for a one-stop but ultimately the idea was for a two-stop. It is not clear if with the safety car, Hamilton would have managed to keep Bottas behind even if he was to stay on a one-stop and Bottas doing two stops.