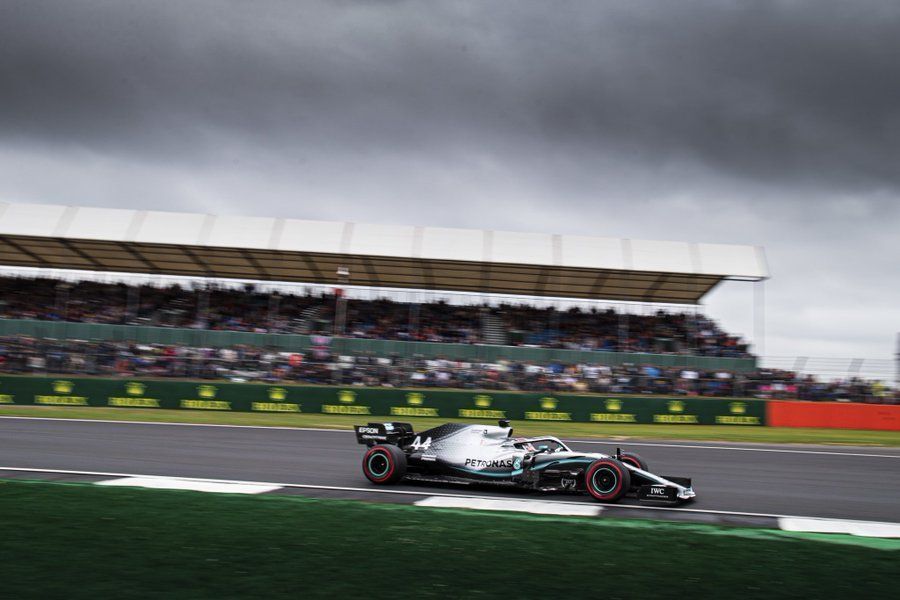 Mercedes’ Lewis Hamilton had in under control eventually with a win in F1 British GP from Valtteri Bottas and Ferrari’s Charles Leclerc.

Pole-sitter and Mercedes’ Bottas started off the F1 British GP at Silverstone well to lead from teammate Hamilton, with Ferrari’s Charles Leclerc keeping off Red Bull Racing’s Max Verstappen as Ferrari’s Sebastian Vettel made up one place to be fifth.

The German cleared Red Bull’s Pierre Gasly as McLaren’s Lando Norris got ahead of Renault’s Daniel Ricciardo for seventh with Nico Hulkenberg in ninth and Toro Rosso’s Alexander Albon rounding out the Top 10 from McLaren’s Carlos Sainz.

Having gained a place on Ricciardo, Norris touched with Gasly in the opening few corners as he then had to fight against the Australian for track position. Behind, the two Haas drivers ran into each other with Romain Grosjean and Kevin Magnussen colliding.

The Dane was on the outside in the left-hander when they touched which forced them to pit and eventually retire. Magnussen reported something lose on the pedal, while Grosjean had lack of downforce due to the hit as the dismal run for Haas continued.

At the front though, Bottas and Hamilton continued to tussle each other as the British racer found a way past his Finnish teammate, but Bottas came back on him to retake the place and British GP lead. The fight for third was on too behind.

Leclerc – on a different compound – was being challenged hugely by Verstappen. The duo went at each other again as Leclerc held on the position until the pit stop. A slightly quicker stop from Red Bull allowed Verstappen to get ahead bu low grip hampered his run.

He was quickly overtaken by Leclerc as they continued on their tussle. Both the Red Bull drivers opted for a two-stop strategy like Bottas but Hamilton stayed out to try and win it via pit stop. It wasn’t working until a safety car period with luck shifting towards him.

Alfa Romeo Racing’s Antonio Giovinazzi beached his car at Club corner after losing control as Hamilton pitted straightaway along with Vettel. Red Bull called in Verstappen too as the trio gained track position but Bottas stayed out along with Leclerc.

The Monegasque though pitted a lap later but by that time he was already down to sixth. The order had Hamilton leading Bottas – with the Finn having to do another stop. Vettel was third from Gasly, Verstappen and Leclerc in the Top 6.

The gainer in the midfield was Sainz as he pitted under the safety car and jumped nearly five cars to be seventh as Norris was eighth. There was plenty of fights in between as Ricciardo leapt back into ninth from Albon with Hulkenberg dropping back.

The German had a collision with Racing Point’s Sergio Perez which damaged the Mexican’s race with Hulkenberg then losing out Alfa Romeo Racing’s Kimi Raikkonen as well. The Finn later on passed Albon to gain another position to be well inside the Top 10.

At the front though, Hamilton continued to lead Bottas as Verstappen started to claw into Vettel’s lead and eventually made the pass on the German. The Ferrari driver mis-judged the braking point in an attempt to switch back and rear-ended Verstappen.

The duo went off with the Dutchman dropping to fifth and Vettel needing a front win change. The stewards handed him a 10 second time penalty as the order changed with Leclerc moving to third and Gasly into fourth ahead of Verstappen.

The midfield fight came down between Sainz and Ricciardo for sixth as Raikkonen got ahead of Albon to be eighth. The Thai racer lost out to teammate Daniil Kvyat as well after Hulkenberg lost out in the middle due to a suspected car issue.

At the front though, Mercedes were asking Hamilton to pit to be safe but the British racer stayed out to score his seventh win of 2019 F1 season and his sixth British GP victory to extend his championship lead with a fastest lap with Bottas having to settle for second.

Having lost out in the middle, Leclerc climbed back to be third as they finished in the same order with Gasly equaling his best result in fourth ahead of Verstappen as McLaren and Sainz took the best of the rest honours in sixth from Ricciardo.

It was a close fight to the line as Raikkonen fended off Kvyat to be eighth as Hulkenberg managed to take 10th from Albon in the end with Norris getting past the Thai racer for 11th. Racing Point’s Lance Stroll was last driver on lead up in 13th.

Behind, Williams’ George Russell led the rest in 14th with Vettel gaining two places to be 15th from Williams’ Robert Kubica and Perez but the German finished behind Kubica after his penalty. Meanwhile, post-race replays showed Vettel going to Verstappen to aplologise for the incident as they shook hands.