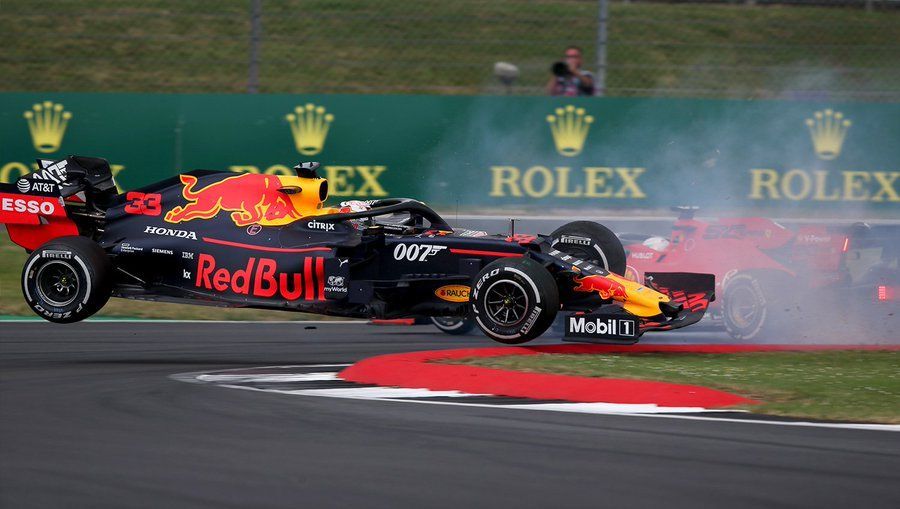 The frantic F1 British GP at Silverstone had fights everywhere in the field with Verstappen getting to tangle with both the Ferrari drivers as he and Charles Leclerc carried forward their tussle from Austrian GP to this grand prix with fantastic wheel-to-wheel fight.

The two hung on though with Verstappen eventually having track position after a mis-calculation from Ferrari with the safety car. The Monegasque dropped behind as Verstappen set his eyes on Vettel, who gained two places to be third due to a late stop.

Despite the track position, the Dutchman had all the pace to catch Vettel and eventually pass him around the outside at Stowe but ran slightly on the kerbs which allowed Vettel to stay with him as the German went for a switcharoo move which didn’t work.

As Verstappen slowed to take the corner, Vettel braked hard but still clouted the back of the Dutchman which led both in a spin. Verstappen eventually brought the stricken car to fifth as Vettel was handed a time penalty as he finished 16th – a lap down.

The German was quick to apologise for his mistake which was shown on the world feed via replays as he explained what led to the situation. “It was my mistake and I spoke to him afterwards and apologised,” said Vettel. He passed me at Stowe and ran wide.

“And then I tried to get back, I thought there will be a gap opening and it looked for a little time that he would go right but then it didn’t happen and I was too close and it was too late to avoid the crash. Ferrari and Red Bull have been very closely matched.

“It has been like that in the last few races and I think it would have been difficult to fight Max off anyway.” At the same time, Verstappen was sedate with his disappointment, especially after Vettel came to him and apologised quickly.

He felt the podium was certainly possible as his target was second place. “The team made a good call with the pit stop and I was catching Seb and we got by on the outside,” he said. “I think he mis-judged his braking into the left-hander and he hit from behind.

“It was very unfortunate, otherwise we would have definitely be on the podium. I honestly don’t know how I brought the car to the finish as it felt like the power steering failed and the floor was damaged, so I’m actually happy to finish fifth and score some points.

“I’m not angry but disappointed as it was hard racing and Seb didn’t do it on purpose. He also apologised as soon as I got out of the car which I respect. I think we put on a pretty good show for the fans today and proved the sport is far from boring.”