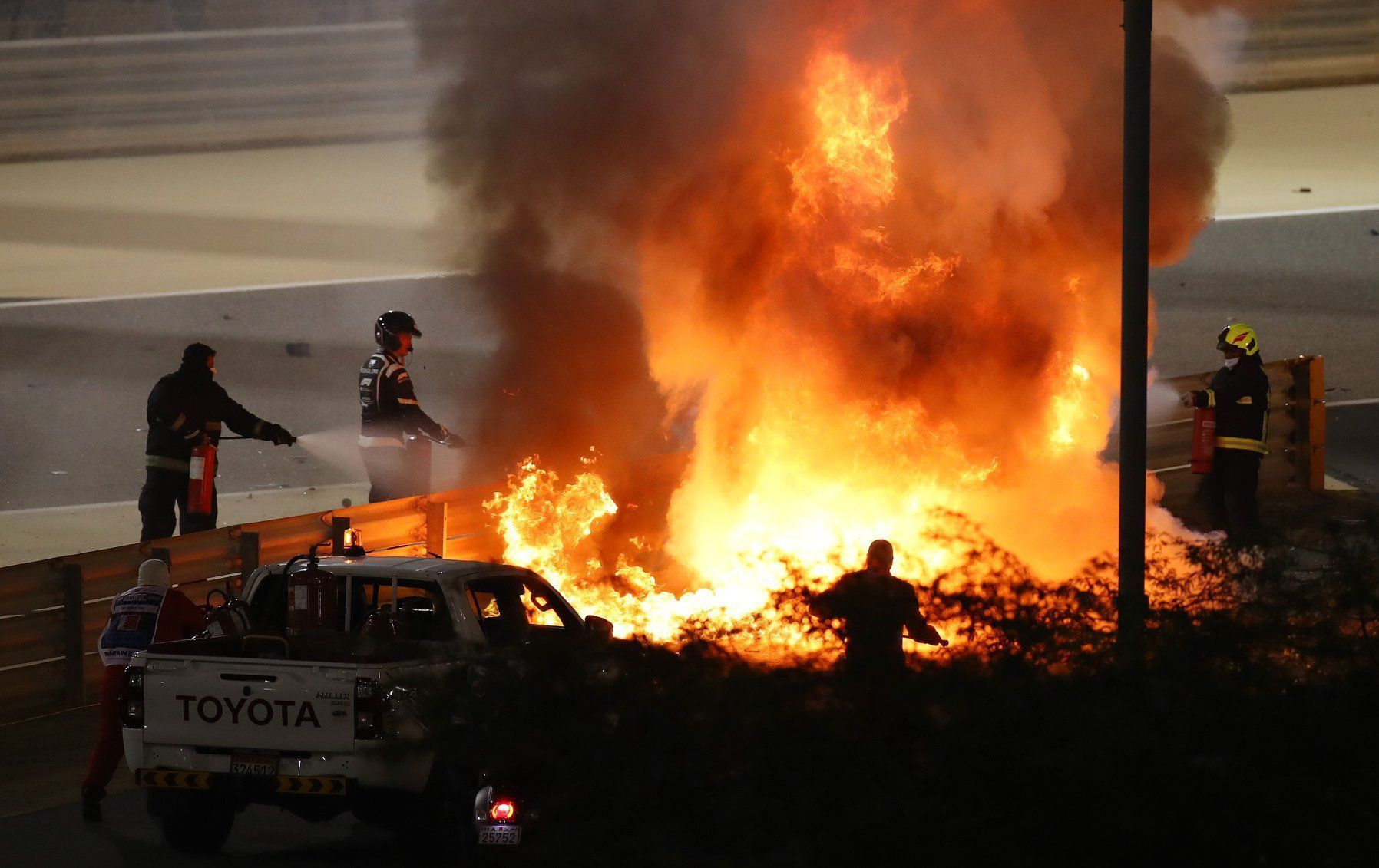 Romain Grosjean has been flown to Bahrain hospital after a huge fireball crash at the start of F1 Bahrain GP in a disastrous situation.

Replays were not shown until it was determined that Grosjean was not critically injured, but once displayed they showed the Frenchman being clipped by AlphaTauri’s Daniil Kvyat after moving to the right, and being redirected towards the barrier on the right.

Grosjean was behind his teammate Kevin Magnussen and was trying to move to his right when he made contact with Kvyat. His Haas went straight into the barrier and caught fire. The car literally cut into half with the rear stationary at the side of the barrier.

Grosjean himself was stuck into the fire with the front portion stuck inside the barrier. Replays showed the Frenchman trying to unbuckle himself and get away from the car, which he managed to as the medical car crew and the marshals arrived to the seen.

It was a giant fireball which was extinguished eventually as Grosjean suffered burns in his hands and ankles. He was put into the ambulance and taken towards the helicopter, from where he was flown to a military hospital in Manama in Bahrain.

The barrier, meanwhile, was repaired quickly as they brought in the temporary concrete.  Speaking to Sky Sports F1, Haas team boss Guenther Steiner stated: “He’s shaken and is going through all the checks that you need to do after an impact like this. He’s conscious, he’s fine, but I didn’t have any direct contact with him, just with the people there.

“He seems to be OK. I want to thank the rescue crews who were there very quick. I didn’t see who it was yet, but the marshals and the FIA people, they did a great job. It was scary, it is scary what happened. When you see what is going on out there, if you see the barrier, where it is torn down, it is unbelievable.

“I think we were lucky by being unlucky. I prefer that luck to any racing luck. He seems to doing good. Hopefully there is nothing coming, but he got away with it I think,” summed up Steiner, as medical car driver Alan van der Merwe relayed the incident.

They were the first one to reach the spot along with Dr. Ian Roberts. “A big surprise for us,” said van der Merwe to F1. “We’ve never seen that much fire – [not] in 12 years. [I’ve] not seen that much fire, and an impact like that. We just took a little while to process that.

“I’m sure it was only a second or so but it felt like ages. Romain just started to get out by himself, which is actually pretty impressive for a thing like that. We had some relief when we got back here in the parc ferm and he was okay. It just goes to show, all the systems we’ve developed, the halos, the barriers, seat belts, making sure it all works. Without those things it could have been a very different outcome.”

The FIA, meanwhile, shared its own statement noting that Grosjean was conscious at all time upon his transfer to the hospital. “The FIA advises that an incident occurred during the opening lap of the 2020 FIA Formula 1 Bahrain Grand Prix today, 29/11/2020, involving car #8, Romain Grosjean,” the statement read.

“The driver was immediately attended to by emergency and medical crews. The driver self-extricated, and was conscious at all times. He was taken to the medical centre before being transferred to Bahrain Defence Force (BDF) Hospital by helicopter where he is undergoing further evaluation. Updates will be given when further information is available.”

UPDATE: An update from FIA and Haas stated that Grosjean will remain in the hospital overnight with burns on the back of his hands but no fractures.

“Following medical evaluation by doctors at the Bahrain Defence Force (BDF) Hospital Haas F1 Team driver Romain Grosjean will remain in hospital overnight to be treated for burns sustained on the back of both hands after his opening lap incident at the Bahrain Grand Prix. All X-rays performed on Grosjean came back clear of fractures. Updates will be given when further information is available,” the statement said.

An update from Romain himself. Pleased to see you’re in good spirits! We hope you make a speedy recovery 🙏 pic.twitter.com/njnjjH4GBi

UPDATE 2: Haas notified on the visit of Steiner to see Grosjean and confirmed that he will be released from the hospital on December 1:

Here’s some of the photos of Romain Grosjean in the incident:

Romain Grosjean, who collided with the barriers, is up and out of his car and is being attended to by medical staff 👍#BahrainGP 🇧🇭 #F1 pic.twitter.com/mUvH9S5pM2

#F1 #BahrainGP A miracle that Grosjean stepped out of that. Never seen a car break in half like that before. #MsportXtra pic.twitter.com/UC3NMZihJ0

#F1 #BahrainGP You might not like the look of the halo, but it 100% made sure Grosjean could walk away from the crash. #MsportXtra pic.twitter.com/SRDoi3viG3

#F1 #BahrainGP Two parts of the same car. Grosjean can count his blessing after walking away from this. DAMN !! #MsportXtra pic.twitter.com/QXBntJNL9r

STEINER: "Romain is doing okay, I don't want to make a medical comment but he had light burns on his hands and ankles. Obviously he's shaken… I want to thank the rescue crews who are very quick. The marshals and FIA people they did a great job, it was scary"#BahrainGP 🇧🇭 pic.twitter.com/lWbZd17ynw

I'm so grateful Romain is safe. Wow… the risk we take is no joke, for those of you out there that forget that we put our life on the line for this sport and for what we love to do. Thankful to the FIA for the massive strides we've taken for Romain to walk away from that safely https://t.co/dG8AXmsbKN

Thank you to Medical Car driver Alan van der Merwe, the circuit medical team and marshals for their quick thinking and actions in getting to Romain so soon after the accident 🙏 pic.twitter.com/hkUChcweeq