Following the feature race of GP2 Series at Hockenheim where Pierre Gasly finished third, the officials saw that the fire extinguisher of the car #21 was empty, therefore not complying with the safety equipment regulation.

As such, the Frenchman has been excluded from the race and will start the sprint race from the back of the grid, promoting his teammate Antonio Giovinazzi to reverse grid pole. Despite this exclusion, Gasly stays in the lead of the championship, six points ahead of Sergey Sirotkin.

The Prema driver was not the only one penalized after the race, Daniel De Jong and Artem Markelov have both been found guilty of creating a collision at turn 6. They both received a five-place penalty but as they failed finishing the race they will start from the pitlane. 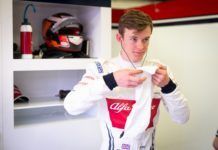 F1 drivers not too pleased with 2021 tyres, Pirelli feels things...