The FIA sticks with the F1 Sao Paulo GP outcome from the stewards of no investigation into Turn 4 despite the availability of new footage.

The F1 Sao Paulo GP did not end on a somber note even though Mercedes and Lewis Hamilton took the win over Red Bull and Max Verstappen. The Turn 4 move from the Brit on the Dutchman was under scanner with the defence from the latter being questioned.

There was no footage available of the move as the FIA steward stated no investigation necessary. While Hamilton was fine at that time, Toto Wolff did not see it that way. With the video available now, Mercedes decided to use the right to review card.

The video conferencing took place on Thursday of Qatar GP with representative from Mercedes and Red Bull meeting with Michael Masi and the stewards. Having looked at the footage, it was decided to not pursue with an investigation.

Mercedes had Ron Meadows, James Vowles and Andrew Shovlin, while Red Bull had Jonathan Wheatley for the meet. The decision was postponed to Friday from Thursday and came in between the press conference of Toto Wolff and Christian Horner.

As per the review, the stewards agreed that the evidence was new and not available then and was relevant too but it was not so significant to require an investigation into the move – something which a lot of them thought would be the end result into the matter. 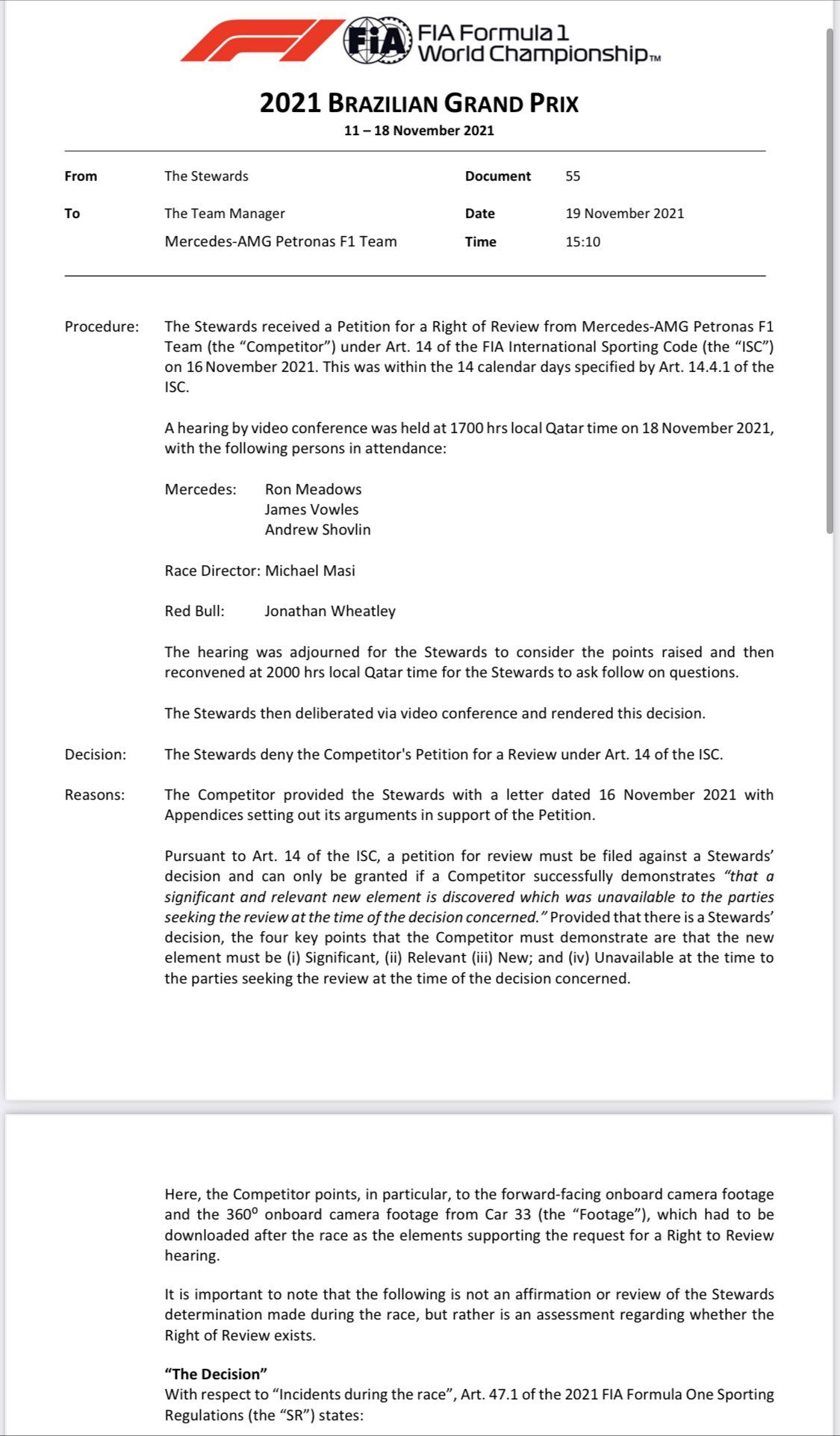 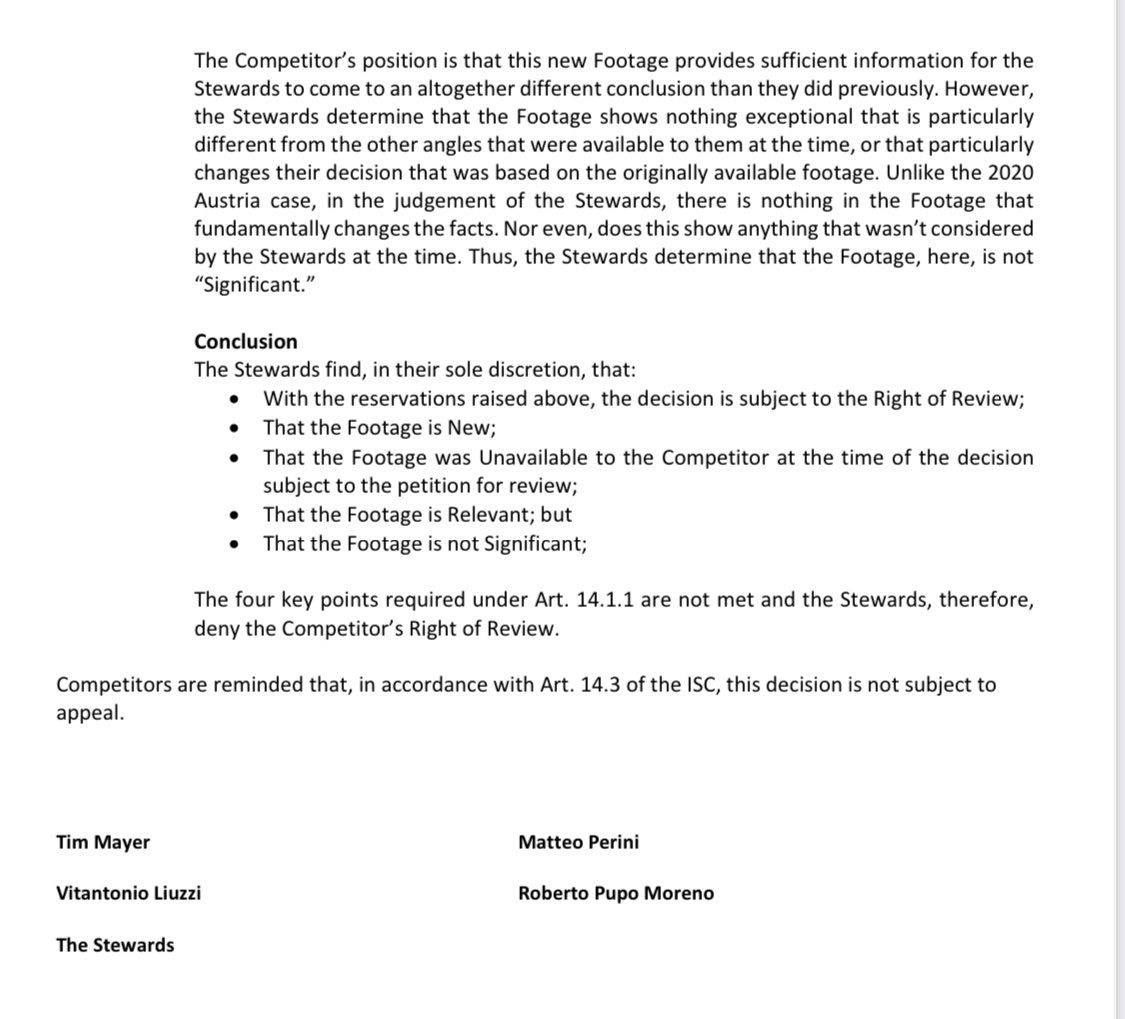 Prior to the meet, Verstappen expanded upon on what he thought about the move. “Yes. You know, as a driver, I think we know exactly what we can or cannot do in a car,” he said. “We were fighting hard, braking late into the corner, the tyres were quite worn. If I would have turned more abrupt to the left, you just spin off the track.

“So that’s why we are the drivers. We try to control the car. I didn’t need to look at the footage because I was driving the car. I know exactly what happened. And like I said last time out, I thought it was a great battle and I had a lot of fun as well out there. At the end of the day, they won the race. Fair enough. They were faster than us.

“But yeah, it was a good battle. I think it’s quite normal when it’s between two teams instead of just one team with two drivers, right. So yeah, I just have to focus on what’s happening on track, of course. The rest [like protests] will be dealt with. I don’t even think about that. It’s not the end of the world [if I get a penalty].

“But again, I don’t expect that to happen because I thought it was fair and hard racing, and between the two guys who are fighting for the championship. It wouldn’t have been any way an easy pass. Because it’s not how I am, and I don’t think how it should be when you’re fighting for the title,” summed up Verstappen.

On Hamilton side, he noted he saw the onboard of Verstappen but didn’t wish to dwell much into the topic. He left it on the team to tackle the situation. “I have not actually been a part of the right of review,” he said. “Of course, I am aware of it. I am fully supportive of my team but I am literally just trying to give all of my energy into this weekend and making sure we arrive and hit the ground running.

“I have no idea where they are going with the discussion or what could be the outcome. I am just not giving any energy or time at all. The reason at the time I said that was because that is just the mentality you have to take. If you sit in the car and complain, it will only hold you back so in the moment I just had to keep moving forwards.

“Also, it is difficult to judge on something you have not seen all the angles. We looked at them and have a different viewpoint now. Honestly, it is not something I really want to dive too much into. I haven’t looked at all of the angles, I have seen the onboard footage, for example, that came out.

“I am just trying to focus on the fact that we did something remarkable and unexpected. Just trying not to focus on any negatives. Right now, the team are in discussion, so I am just leaving them to it,” summed up Hamilton.

For Sebastian Vettel – when asked about his view – he felt the review to not needed. “They were fighting for the lead, so it’s obviously the biggest fight going on in every race,” he said. “I’m not involved. But I think it’s a bit unnecessary. I think time goes one way, so what changes? I don’t think anything changes. I think Lewis drove a great race. He won. He was faster. That’s it.”

As Alpine’s Fernando Alonso added: “Nothing should happen now. I don’t know exactly if it was too bad, but the stewards, they considered that there was no penalty there, there will be no penalty, I guess.”

Here’s the video link from F1 of Turn 4

Here’s Mercedes and Red Bull with their initial reaction