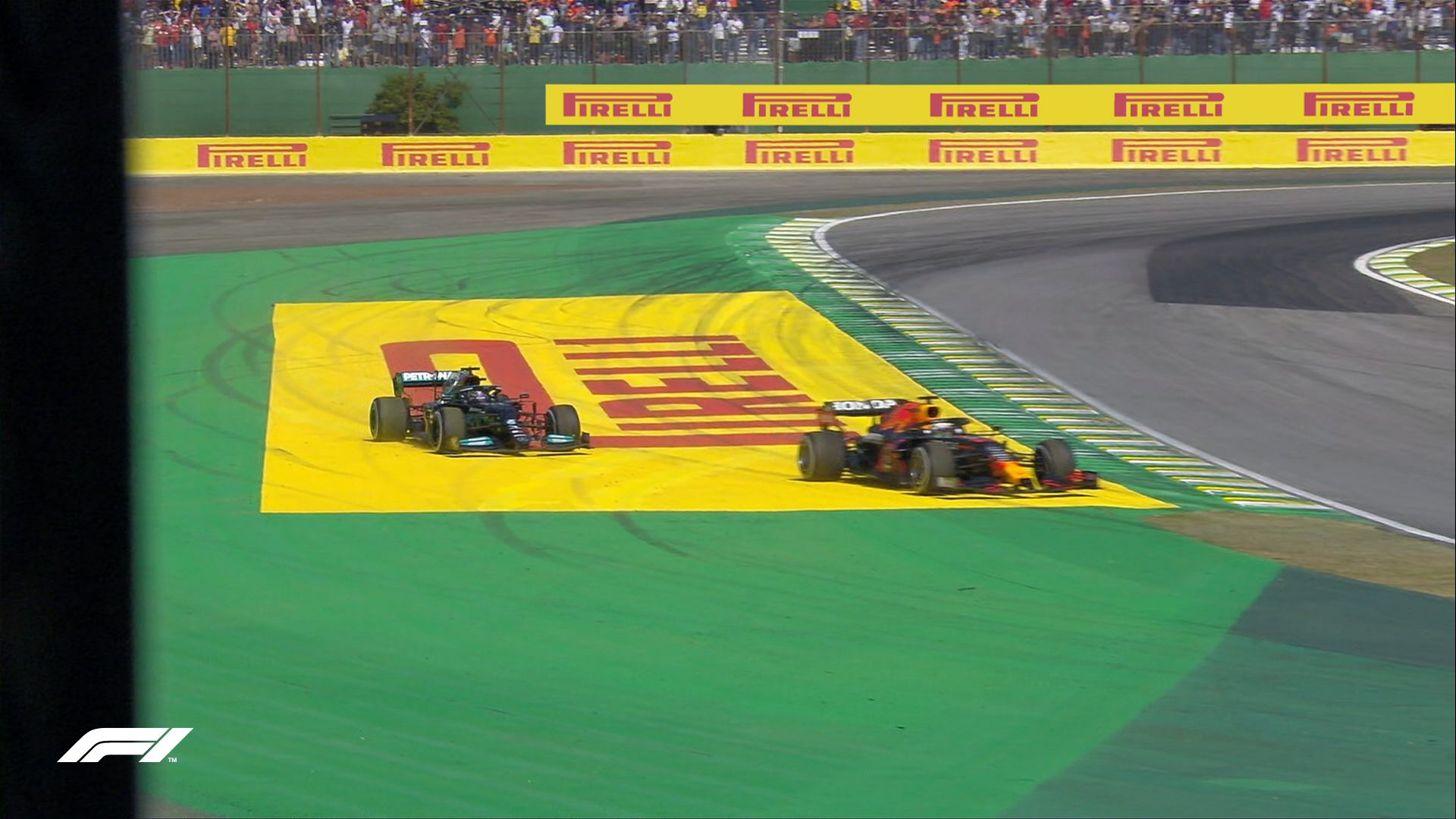 There’s hardly any F1 grand prix this year which hasn’t resulted in some sort of a ‘controversy’ when dealing with Mercedes and Red Bull. The Sao Paulo GP had a big one where Hamilton was disqualified due to DRS infringement on Saturday.

Fortunately, the sprint weekend allowed them to take it during the sprint qualifying and Hamilton fought through to start 10th for the main race. It was a charge in both of the races to eventually win dominantly, but it didn’t come easy for him.

Verstappen made it difficult when Hamilton first came around him at Turn 4. It certainly looked like the Dutchman ran him too deep as both went off trying to apart from each other. It sure seemed like on the fence defence and could have gone either way.

Mercedes were hoping for at least a 5s penalty but the FIA stewards did not even investigate it after noting it. The ‘let them race’ idea panned out from Race Director Michael Masi – who has been under-fire anyhow for whole of 2021.

Both the Mercedes and Red Bull drivers explained the move rather subdued and more towards ‘hard racing’ and that nothing happened. The team bosses more or less agreed that both knew what was happening, but Wolff reckoned 5s penalty was on.

Horner did agree that they would have moaned like Mercedes did but eventually moved on. He felt since neither touched and eventually went off with no loss or gain, it didn’t warrant a penalty. Masi, meanwhile, revealed of no onboard from Verstappen.

Hamilton: “In the heat of the moment, it doesn’t… I don’t really know. I think I was ahead initially, and I think he held his ground and we both ran out of road. Well, I think he was running out of road, so I obviously had to avoid to go out of road – but I mean, I didn’t think too much of it and obviously I’ll have to watch the replay, but it’s hard battling and wouldn’t expect anything less really. We didn’t touch wheels, which is good.”

Verstappen: “We both, of course, tried to be ahead into the corner and so I braked a bit later to try and keep the position and the tyres were already a bit worn so I was really on the edge of grip so that’s why I think I was already not fully on the apex so then it’s a safer way of just running a bit wide there, so in a way I was of course happy that the stewards decided that we could just keep on racing because I think the racing in general was really good today.”

Horner: “I mean, it is two guys running hard and Lewis has got a run around the outside. Max has gone in deep and they have both gone wide, so it would have been really unfair to penalise on that. If it was the other way around, I would have let my sporting director have a moan about it but I wouldn’t have expected anything from it. And penalty for what? There is no advantage gained and no contact that has been made. I think it is just hard racing between the two of them. I think actually the stewards made the right decision on that.

“We have talked about this many, many times about the let them race mentality, and I think they made the right call today. You want to see the guys go hard at it, otherwise.. with Max, he is going to race hard and Lewis is exactly the same. That is two guys fighting for a world championship so it is going to be tough racing. But I think it was fair and there was no contact and they recommenced it a few laps later.”

Wolff: “The whole weekend went against us. We had a broken part on our rear wing which we couldn’t look at and analyse, failed the test and was disqualified very harshly.

And then you see on the Red Bull, repairs three times in a row on the rear wing while staying in parc ferme with no consequence. That’s one thing and that really peaked with the decision in the race, which was really the wrong defence for Max where Lewis didn’t want to comment, I’d like to comment.

“Absolutely an inch over the limit, but he needed to do that to defend. Lewis just managed it even more brilliantly by avoiding the contact and ending the race that way, but that was just over the line, it should have been a five second penalty at least. Probably Max knew that. But just brushing it under the carpet is just the tip of the iceberg. I mean, it’s laughable. Lewis was ahead initially, so he drives him smoothly like on a Sunday morning off the track, both of them, he also, I’d like to see the onboard Max’s onboard actually.”

Masi: “It hasn’t been obtained but it’s been requested. It’s only the cameras that are broadcast is basically what we have access to throughout the week. It could be, absolutely, potentially, absolutely [good piece of evidence]. But no, we didn’t have access to it. Obviously it’s been downloaded and once we do, and once the commercial rights holder supplies it, we’ll have a look. The forward-facing ,the 360, all of the camera angles that we don’t get live will be downloaded and we’ll have a look at them post-race.

“I disagree that it’s inconsistent. You have a look at it and as I’ve said many times before you judge the incident on its merits and you have a look at all of it. And let’s not forget we have the overall ‘let them race’ principles and looking at it with all of the angles that we had available it was that philosophy that was adopted. “If you look at the proximity of the cars heading into the apex, where it is, the nature of the corner, the fact both cars went off, neither car lost position or anything like that – that was probably the general view.”