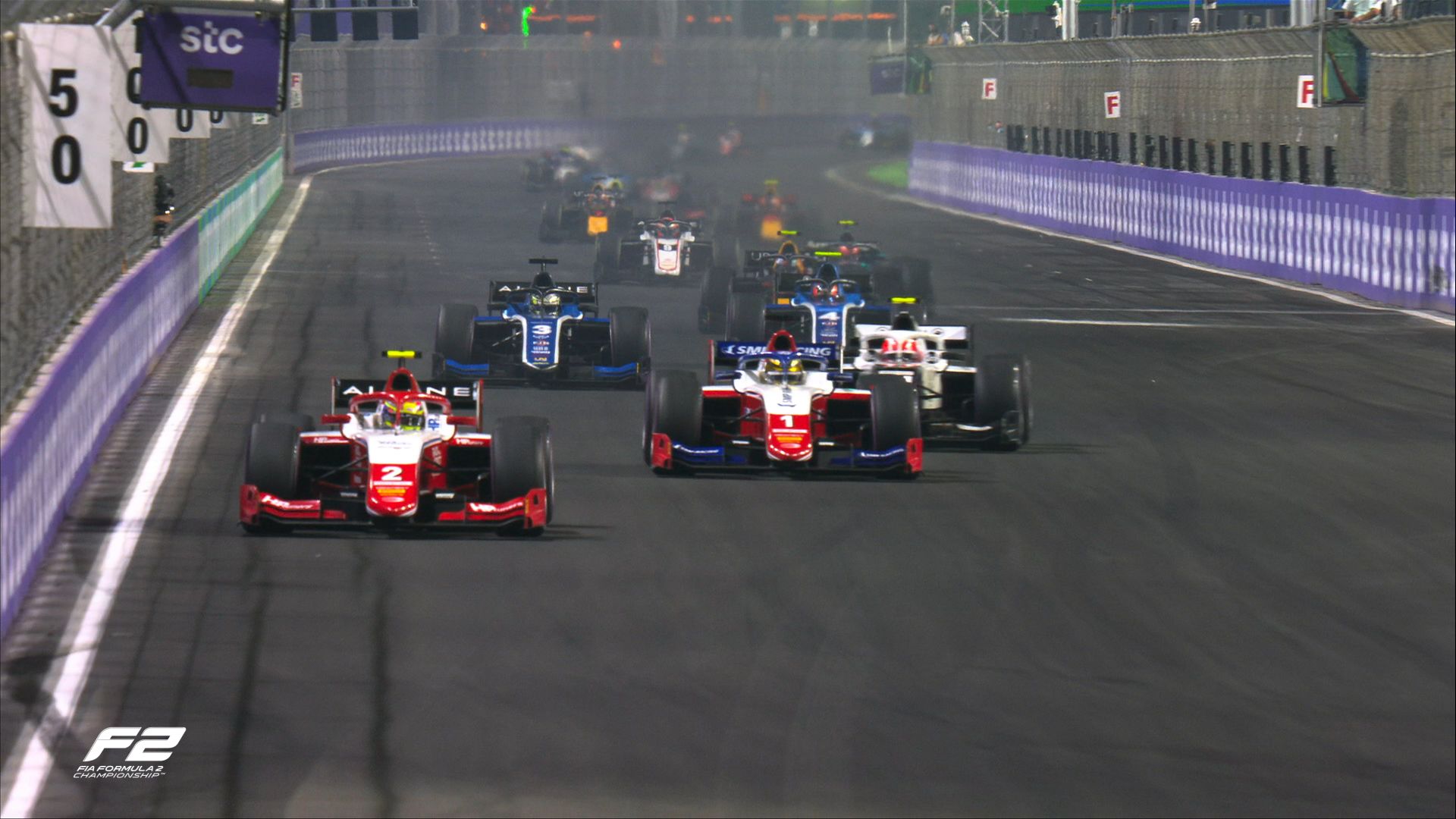 Oscar Piastri won the feature F2 race in Jeddah after the race was red-flagged due to massive incident as the FIA shared their statement.

The feature F2 race was already delayed due to a barrier repair after the Middle Eastern Porsche Sprint Race. They were installing a new cement block at Turn 13-14-15 sequence. They finally got going after nearly 45 minutes of waiting.

The formation lap saw MP Motorsport’s Clement Novalak stalling with another one doing so at race start. It was ART Grand Prix’s Theo Pourchaire who stalled at the original start with every car avoiding him bar Charouz Racing System’s Enzo Fittipaldi.

The race was immediately red-flagged for the incident with no footage aired for a considerable time. There was another incident at Turn 2 between Carlin’s Daniel Ticktum and Hitech GP’s Liam Lawson with both managing to carry on.

After a lengthy delay, the F2 race was confirmed to have start with 20 minutes plus one lap with a mandatory pit stop included. The order of re-start was Piastri ahead of Shwartzman, Boschung, Zhou, Drugovich, Vips, Armstrong, Lundgaard, Daruvala and Lawson in Top 10.

It was a rolling start with pit stop to start from Lap 4 onward. The re-start was safely done as Piastri led from Shwartzman and Boschung. Further down Daruvala lost two places to Lawson and Ticktum where the former was on the outside and latter on inside.

The Indian managed to get back on his teammate and gained another place after Armstrong dropped down the order. Zhou, meanwhile, tried a move on Boschung for third and almost went off-track at Turn 1. The incident was put under investigation.

There was another incident involving Campos’ Olli Caldwell and Charouz’ Guilherme Samaia. It was the former who spun after losing rear and the Brazilian had nowhere to go. The safety car was deployed but the race was eventually red-flagged and with no re-start.

As there were plenty of cars in the pits, the order was not certain. On countback of two laps, Piastri was declared the feature F2 racer winner in Jeddah from Shwartzman and Boschung as title contender Zhou was fourth from Drugovich.

Vips was sixth from Lundgaard as Armstrong was re-classified in eighth ahead of Lawson and Ticktum in the Top 10, with Daruvala’s misery seeing another no points show in 11th despite the Indian being in ninth at the time of red flag.

“The FIA advises that incident occurred during the FIA Formula 2 Feature Race start today, 05/12/21, in Jeddah, Saudi Arabia, involving car #10, Théo Pourchaire, and car #14, Enzo Fittipaldi,” said the statement from FIA. “The drivers were immediately attended to by emergency and medical crews. The drivers were conscious and extricated by the attending medical crews. Both have been transferred by ambulance and helicopter to King Fahad Armed Forces Hospital, Jeddah.”