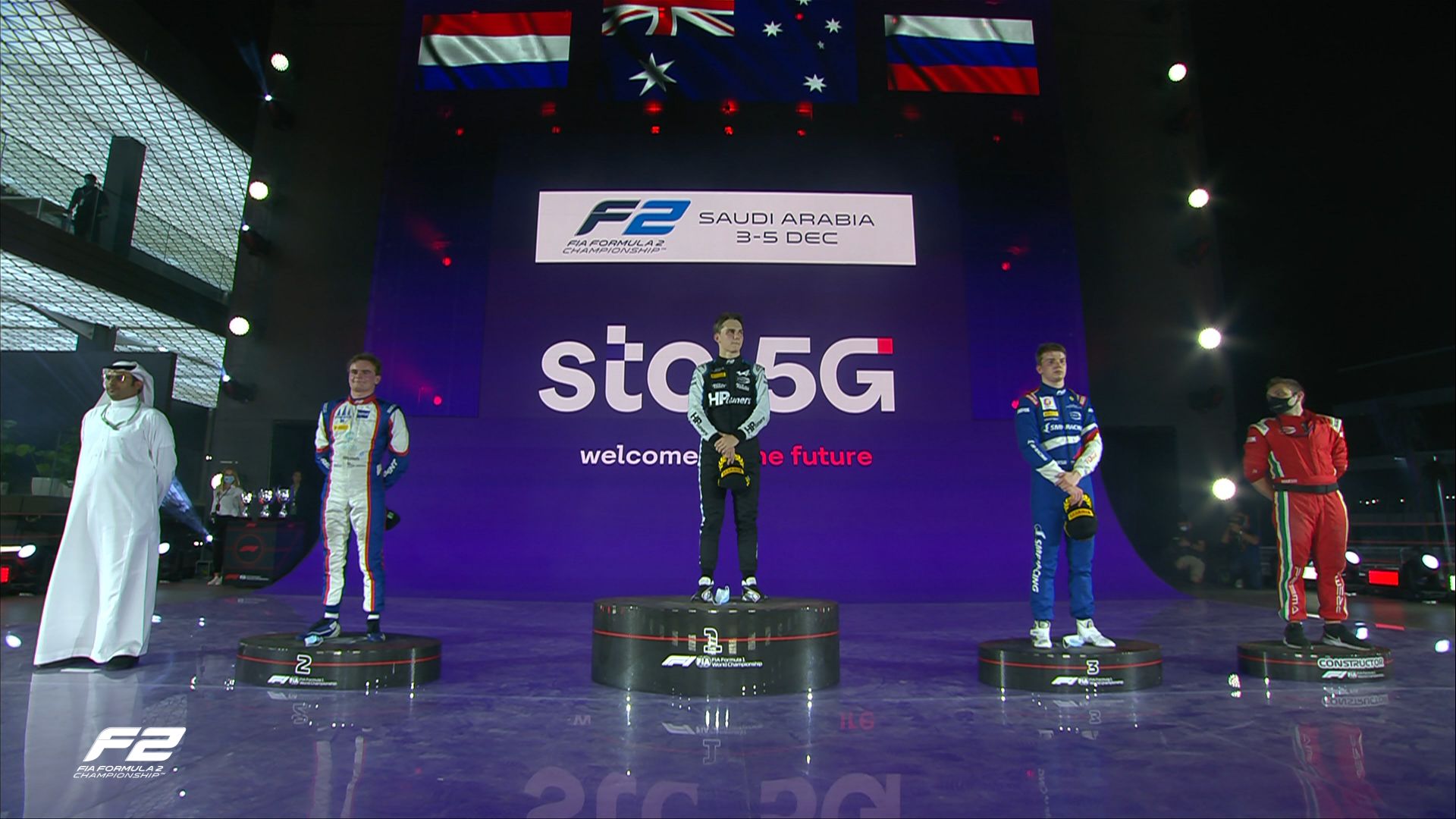 Marcus Armstrong and Oscar Piastri took race wins in FIA Formula 2 (F2) races on Saturday in Jeddah ahead of the feature event on Sunday.

It was a feisty start from the front-row from DAMS’ Marcus Armstrong as he got the better of pole-sitter Liam Lawson in the Hitech GP to take the lead of the race with Campos’ Ralph Boschung in third when the safety car was deployed for an incident behind.

Campos’ Olli Caldwell punted the back of Charouz’s Guilherme Samaia which sent him into the wall as he took Trident’s Marino Sato with him. The latter two retired from the race, as the former had to pit for a front wing change early on.

The re-start didn’t last long as the Virtual Safety Car was deployed after UNI-Virtuosi Racing’s Guanyu Zhou spun himself when trying to overtake ART’s Christian Lundgaard. The Chinese dropped down the order after a pit stop.

Armstrong steadied in the lead from Lawson with Boschung under pressure from Hitech GP’s Juri Vips. The other UNI-Virtuosi Racing of Felipe Drugovich was fifth from Prema’s Robert Shwartzman who cleared both Lundgaard and ART teammate Theo Pourchaire.

The move was put under investigation after Shwartzman went off-road along with Pourchaire. With the Frenchman dropping behind Lundgaard, the Russian couldn’t give back the place which forced the stewards to hand him a 5s penalty.

Pourchaire came under pressure from Carlin’s Jehan Daruvala who managed to clear Prema’s Oscar Piastri after safety car re-start. The Indian tried the move on the outside but Boschung cut him off which allowed Piastri to clear him for ninth.

It brought Carlin’s Daniel Ticktum in the game after his hefty battle with Trident’s Bent Viscaal. The duo exchanged places couple of times where the Brit had to give up the place when he passed the Dutchman off-road, much like Shwartzman.

They all gained places on Boschung who dropped like a pack of cards after losing third to Vips. The Swiss dropped to outside the Top 10 as another VSC period ensued after a spin from Pourchaire at Turn 22 on his own. A full SC was deployed soon enough.

The re-start happened with two laps to go where Armstrong fended off both Lawson and Vips, who had Drugovich on his tail. Shwartzman steadied in fifth as Lundgaard had to defend sixth from Piastri, Daruvala and Ticktum – all close to each other.

Ticktum tried to get Daruvala on re-start but the Indian got the place back. He then went on the inside in the final corner to get both Piastri and Lundgaard when the Australian tried a move on the Dane on the outside for sixth.

Lawson was all over Armstrong for the lead, but the DAMS driver held off to win Race 1 of Jeddah F2 weekend as it was Hitech GP 2-3 after Vips ended up third. Drugovich close on his tail but had to be content with fourth from Shwartzman and Daruvala.

The penalty to the Russian allowed the Indian to be fifth with Shwartzman hanging on to sixth ahead of Lundgaard and Ticktum in the points position. The Brit passed Piastri in the final corner with Viscaal rounding out the Top 10 positions.

UPDATE: Daruvala was handed a 5s penalty post-race for cutting a corner and gaining an advantage while passing Ticktum. As a result he dropped out of points to 10th with Shwartzman, Lundgaard, Ticktum, Piastri and Viscaal gaining a place each. 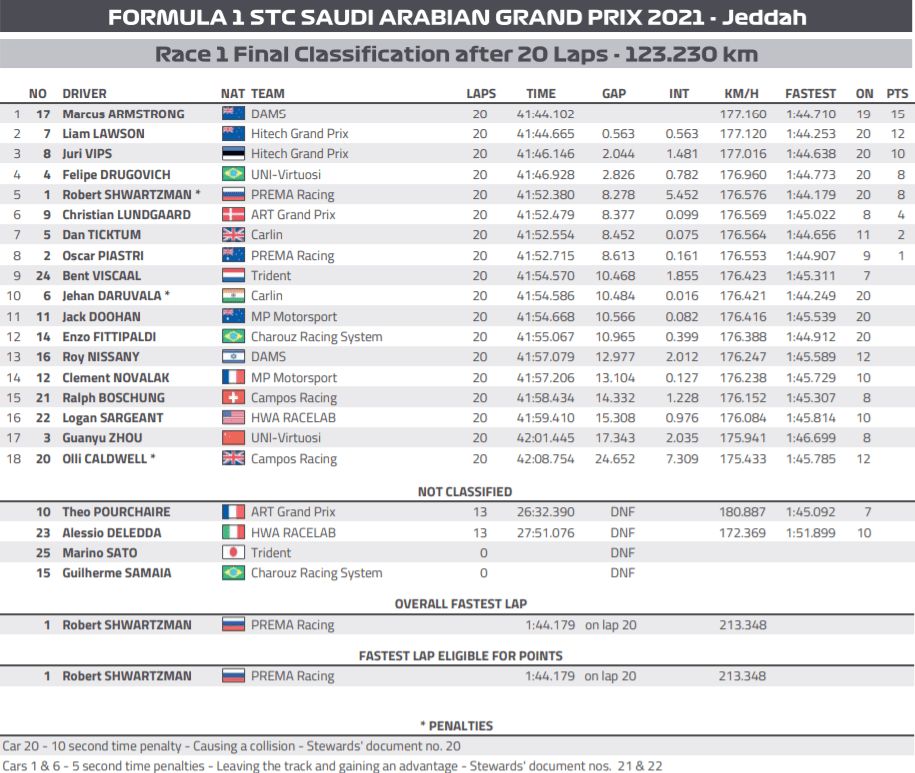 Having got a post-race penalty, Daruvala started Race 2 on pole under lights in Jeddah and had a decent start to keep Viscaal behind despite his attempt at Turn 1 exit. Before they could push on, a multi-car incident brought out the safety car.

The first incident at Turn 1 saw Novalak lose control and sway into Armstrong, spinning him in the middle of the track. During his spin he caught out Lawson too but the latter continued on. Behind, Boschung lock-up left Samaia and Deledda nowhere to go.

As the cars were being cleared out, Daruvala led Piastri and Lundgaard in the Top 3 with Viscaal in fourth from Ticktum, Shwartzman, Vips, Drugovich, Doohan and Lawson. Even before the race got back on, there was another safety car period.

Just before it, Drugovich tried a move on Vips in the penultimate corner and got through him as the Estonian came back on him on the main straight. As he tried to move to the inside line, he clipped his front wing and came to a halt on the track.

There was another retirement with Sargeant stopped on track. As the race got underway, Daruvala locked up at Turn 1 and went off when defending against Piastri. Behind, Lundgaard got through Viscaal after the Dutchman passed him early on.

The Dane went slightly off in the move – both his and Daruvala’s off was put under investigation later on. At the same time, Shwartzman made the move on Ticktum for fifth as stewards handed 5s penalties to both the Dane and the Indian driver.

This put Piastri in the box seat but he wanted to pass Daruvala on track. The two jostled back and forth for couple of laps before the Australian eventually got the better of the Indian at Turn 1. Despite the flat-spot, the Carlin driver hung on the back of him.

Lundgaard defended from Viscaal and Shwartzman as well but their fight vent in vain after Lawson spun into the barrier to call out the safety car. With the race ending under the safety car, Piastri extended his F2 points advantage with a good Race 2 win.

Even though Daruvala and Lundgaard were second and third on the road, they dropped to 14th and 15th, promoting Viscaal to second and Shwartzman to third. Ticktum ended up fourth from Doohan, who scored his first points in F2 in only his second race.

Unseen in all of this, Pourchaire came from the back of the field to sixth with Fittipaldi and Zhou taking the final points where the Chinese driver did the same fight through the field. The Top 10 was rounded by Boschung and Drugovich.