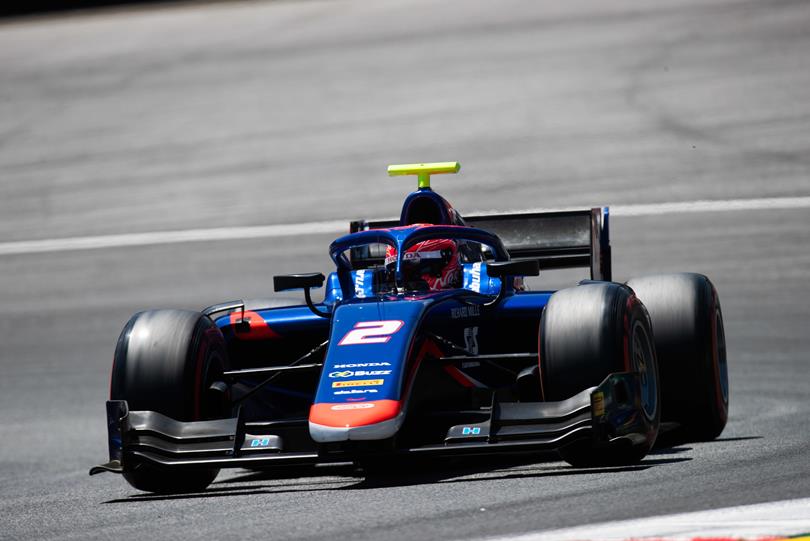 The pole-sitter and ART’s de Vries started the feature F2 race at Red Bull Ring well ahead of BWT Arden’s Hubert as UNI-Virtuosi Racing’s Guanyu Zhou battled Carlin’s Matsushita but the Chinese racer lost the place to the Japanese as Luca Ghiotto got in action too.

Matsushita moved past Hubert for second as the Frenchman lost a place to Zhou with Ghiotto moving past DAMS’ Nicholas Latifi to be fifth. The Italian then took on Hubert as well to be fourth as Latifi was spun around by DAMS’ teammate Sergio Sette Camara.

The Canadian dropped down the order as the Brazilian was handed five seconds penalty. At the back though, Prema’s Mick Schumacher only had a salvaging job after the German stalled at the start of the formation lap which forced him to start from the pitlane.

The pit stop saga started with de Vries returning as the leader ahead of Matsushita but it was Ghiotto who had track position over Zhou, who actually lost to both Ghiotto and Hubert. It was more trouble for the Chinese racer as he faced a gearbox glitch.

It dropped him down the order and out of the podium contention. At the front, the drivers on the soft tyres took charge with Prema’s Sean Gelael leading ART’s Nikita Mazepin, Campos Racing’s Arjun Maini in the Top 3 positions.

Behind, BWT Arden’s Tatiana Calderon was fourth with MP Motorsport’s Patricio O’Ward fifth and Trident’s Ryan Tveter – with three newcomers inside the Top 6 on the alternate strategy. The battled continued still as Mazepin took the lead from Gelael.

The Indonesian lost to Maini as well as he struggled with the tyres. The drivers on the alternate strategy were already caught up by the race leader with de Vries coming through to second position behind Mazepin but Matsushita was catching up quick.

Once the other drivers were cleared, it was close between de Vries, Matsushita and Ghiotto with the trio separated by less than a second. The Honda junior took the race lead eventually as Ghiotto took second from the Dutchman, who was struggling with tyres.

Once in the lead, Matsushita eased in to score his first win of the 2019 F2 season with the Japanese driver scoring his first since the 2017 Hungararoring event as Ghiotto was second second with de Vries eventually taking third and take the final place on the podium.

The Dutchman lost out to Camara towards the end but a five seconds penalty dropped him to fifth as Hubert took fourth. Behind, Zhou recovered well to be sixth with Carlin’s Louis Deletraz doing well to be seventh and secure a sprint F2 race front-row start.

The pole though went to eighth placed MP Motorsport’s Jordan King as Latifi also recovered to ninth with Campos’ Jack Aitken securing the final point in the Top 10 as Sauber Junior Team by Charouz’s Juan Manuel Correa just missed on the point.

In fact, the Colombian came close to losing out to Mazepin, who was the leader in the alternative strategy. The Russian passed Trident’s Giuliano Alesi and Sauber Junior Team by Charouz’s Callum Ilott with Maini ending up 15th.

UPDATE: Following the post-race checks, it was found that Campos put the rear tyres on Maini’s wrong at wrong sides – meaning, the left was put on the right and the right one at the left. The stewards have thus disqualified Maini from the feature race.

The Indian finished a fine 15th on his return on the alternate strategy but the goof-up from Campos has cost him dearly with little chance to progress from the back of the field for Sunday’s sprint race.

Campos Racing’s Arjun Maini has been disqualified from this afternoon’s F2 Feature Race results at the Red Bull Ring after it was discovered that his tyres had been fitted incorrectly to the car prior to the start.

When the Indian driver came in for his mandatory pit stop on lap 34 it was found that the rear tyres had been placed on the incorrect sides of the car.

The stewards examined the Technical Delegate’s report and concluded that the car was not in compliance with the Sporting Regulations and therefore was disqualified from the result.