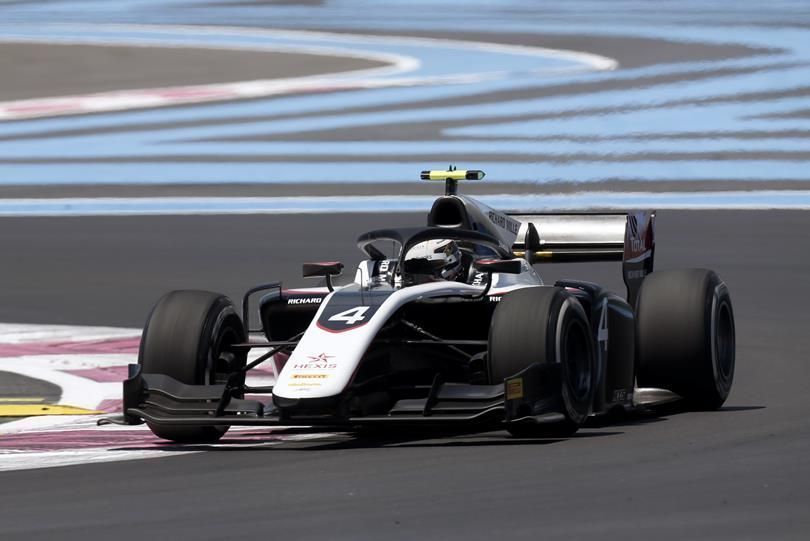 Behind, it was chaos as Prema’s Sean Gelael lost control in the pack and slid off to hit the bollard and also teammate Mick Schumacher from behind, sending the German into the air as he limped back into the pits with a rear puncture – both eventually retiring.

There was more drama with spins for Trident’s Ralph Boschung and ART’s Nikita Mazepin, resulting in their retirement, with Campos’ Dorian Boccolacci also retiring due to mechanical issue as a VSC situation turned into a red flag to clear the cars.

The re-start worked well for de Vries as he kept his lead from Aitken and Camara but at the lower half of the Top 10, Carlin’s Louis Deletraz took eighth from Sauber Junio Team by Charouz’s Juan Manuel Correa as he also had to defend by Virtuosi’s Luca Ghiotto.

The leaders pitted early with de Vries coming behind Aitken in the fight for the win but the Dutchman immediately bought back to retake track position from Aitken and Camara as Ghiotto led the race from Correa and MP Motorsport’s Jordan King.

Even BWT Arden’s Anthoine Hubert and Trident’s Giuliano Alesi went deep in fourth and fifth. Meanwhile, there was another VSC period after a run-in between Carlin’s Nobuharu Matushita and Sauber Junior Team by Charouz’s Callum Ilott.

The two went side-by-side but Ilott lost control to spin out. A little later on Deletraz retired as well to a problem which couldn’t be fixed by the team. Meanwhile, with nine laps to go, the pack at the front finally pitted with only King staying out.

De Vries back in lead after all of them pitted with Aitken and Camara behind him. Among the later stoppers, Ghiotto looked to have the advantage but the Italian collided with Correa which broke the former’s front right suspension to send him into retirement.

It helped Correa to seventh as Alesi climbed up to 10th. For de Vries though, it didn’t matter as the Dutchman eased in to score his third F2 win of the 2019 season and have his second feature race victory to take over the points lead.

The fight for second was on between Aitken and Camara in the end stages which the Brazilian won with a move at Turn 1 to take track position as Aitken had to be content with third with Zhou finishing fourth ahead of Latifi, who lost his F2 points lead to de Vries.

Behind him, it was Correa in seventh with Hubert eighth – the Frenchman on a reverse grid pole for his home race –  as Matsushita and Alesi rounded out the Top 10. It ended up being a race of survival with only 12 finishers in all and seven retirements.