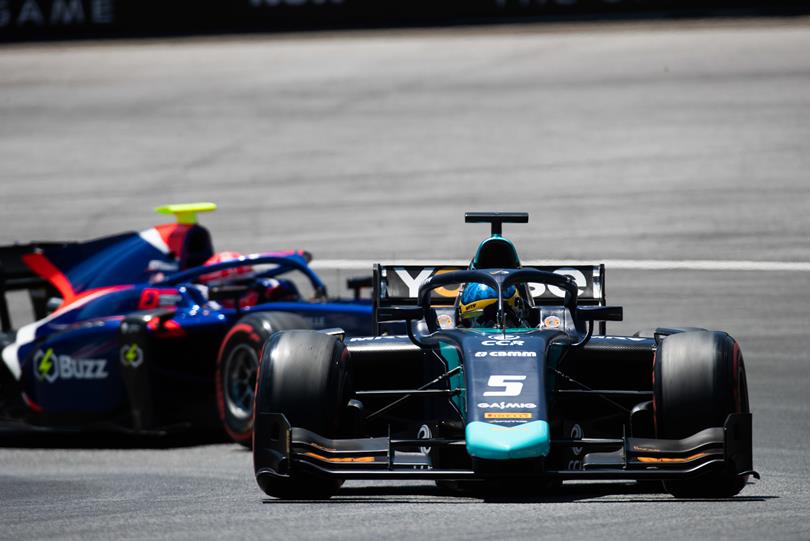 The Chinese racer dropped behind de Vries and DAMS’ Sergio Sette Camara with UNI-Virtuosi Racing’s Luca Ghiotto in sixth ahead of BWT Arden’s Anthoine Hubert and Campos Racing’s Jack Aitken in the points scoring positions in the Top 8.

King started to lose grip as de Vries passed both King and Deletraz into the lead but the Dutchman had some issues which dropped him to sixth as Camara battled past Deletraz and King to take the lead of the race as Deletraz had Zhou on his tail with King falling out.

At the lower end of the Top 8, Hubert came under tremendous pressure from Aitken as the British-Korean racer brushed the back of the Frenchman which forced Aitken to retire as Hubert then lost out to Prema’s Mick Schumacher, who moved himself in the points.

He gained another place for struggling King as Hubert dropped off the points position with DAMS’ Nicholas Latifi moving in eighth. At the front, there was change for the final podium position when Ghiotto passed teammate Zhou to move into third.

It then became two UNI-Virtuosi Racing cars in the Top 3 when Deletraz crashed out at Turn 1 as he radioed of no brakes in a heavy impact, which resulted in a safety car. The retirement allowed Sauber Junior Team by Charouz’s Juan Manuel Correa in eighth.

On re-start though, Correa lost out to Carlin’s Nobuharu Matsushita for eighth as de Vries passed Zhou for third and Schumacher made his way up to fifth as well. There were more places on offer as Matsushita got fifth with Zhou dropping to sixth.

At the front, Camara managed the race well to score his first F2 win since the 2017 season in the sprint race – it is his first as a McLaren junior too. Ghiotto came home in second with de Vries fending off Schumacher in the end to third – the duo only 0.2s apart.

The German scored his first points since the Baku round as feature race winner Matsushita was close behind to be fourth as Latifi finally passed King to be sixth with Zhou scoring the final point ahead of Sauber Junior Team by Charouz’s Callum Ilott and Correa.

Having looked to score points early on Hubert dropped back to 16th, while Red Bull junior Patricio O’Ward did well in his second race to be 14th ahead of Campos Racing’s Arjun Maini, who was forced to start from the back due to disqualification.