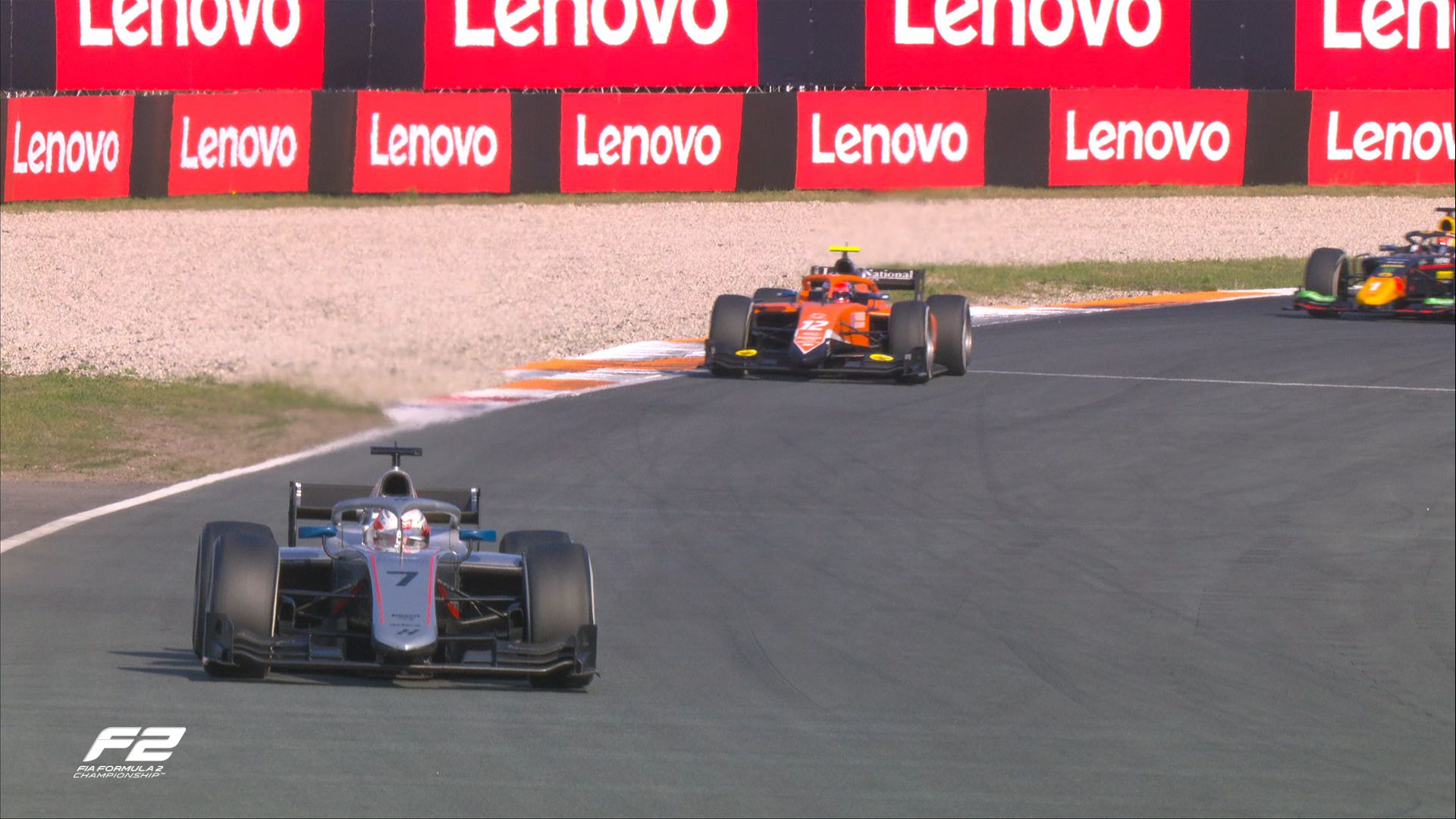 Reverse grid pole-sitter Clement Novalak lost the sprint F2 race lead at Zandvoort in his MP Motorsport car as Hitech GP’s Marcus Armstrong took him on with the Frenchman under pressure from Prema’s Dennis Hauger as well behind.

He held onto to second, where Carlin’s Liam Lawson made a bold move on Hitech GP’s Juri Vips to take fourth after the Estonian was sent to the gravel. Trident’s Richard Verschoor was sixth from DAMS’ Ayumu Iwasa and Carlin’s Logan Sargeant in the points places.

As things settled in the front, ART’s Theo Pourchaire had a wide moment at Turn 1 while battling VAR’s David Beckmann to drop down the order, with Prema’s Jehan Daruvala also having a lock-up to drop two places behind he gained.

The F2 return for Olli Caldwell did not go well as the Campos driver also had a lock-up at Turn 1 to go off but he managed to reverse and make it into the pits. As expected, the F2 race started to become a train considering the characteristics of Zandvoort circuit.

Amid a procession, Daruvala had another spin late in the race but managed to continue on without losing a position. There was a late safety car too after Charouz’s Tatiana Calderon was beached in the gravel at Turn 2 after she stalled on the grid too.

There was a last lap shootout after the safety car ended one lap earlier. Armstrong held on to win the sprint F2 race at Zandvoort from Novalak and Hauger, as Lawson was fourth from Vips. Behind him, Verschoor lost sixth to Iwasa on re-start.

Sargeant, meanwhile, was eighth to end up in points position, as top 10 was rounded out by Virtuosi’s Jack Doohan and MP Motorsport’s Felipe Drugovich.

Dominating the front row were two black and white ART Grand Prix cars, as Correa lined up on reverse grid pole ahead of teammate Saucy, while O’Sullivan and Collet lay in wait just behind. In his first Formula 3 race, Sebastian Montoya found himself sitting in P6. Meanwhile, title protagonists could be found up and down the field, with Hadjar in seventh ahead of Stanek and Crawford in ninth and tenth. The third ART of Martins lined up P11, while PREMA Racing’s Oliver Bearman and Arthur Leclerc started in 13th and 20th respectively.

With the tight run down into Turn 1, nailing their getaways would be vital and Correa did just that, moving to cover off a strong starting O’Sullivan who got the jump on Saucy off the line, with the Swiss driver dropping down to fifth. He wasn’t the only one making moves into the opening corners, with MP Motorsport’s Caio Collet making his way through to second from fourth, whilst Bearman climbed up into the points by the end of Lap 1.

Both Tridents found themselves facing a difficult start, as Franco Colapinto tagged the rear of Roman Stanek in Turn 1, forcing Zane Maloney to take evasive action through the gravel trap and dropping the Bajan driver to the back of the field.

Out front, Collet was ready for his opportunity to pounce on Lap 4 and take the race lead from Correa. Attempting to make the move stick around the outside of Turn 1, the Brazilian dipped his wheels across the kerbs into Turn 3, allowing the ART driver to use the momentum from the top of the banking to hold him off.

However, Collet wasn’t done yet and one lap later he got the traction that he needed, going deeper on the brakes to try another daring move into Turn 3. Going side-by-side, neither driver wanted to yield but the MP car managed to keep his foot to the floor a fraction longer to get the overtake done and began pulling away from the American.

Whilst Correa found himself forced to go on the defensive from the DRS train behind, there was a battle unfolding at the back of that pack with Stanek closing in on Bearman, aiming to demote his title rival out of the points in P10.

Things began to settle down towards the mid-point of the race, as the medium Pirelli compounds began to fade, leaving those who managed the yellow-walled tyres the best with the upper hand towards the latter stages of the 21-lap Sprint Race. Approaching the final seven laps, Bearman’s defence came underdone with a wobble into Turn 4. The Ferrari Academy junior went over the kerbs and across the grass, dropping him behind Stanek.

Meanwhile, Montoya’s introduction to life in F3 was far from easy, as the Campos Racing driver had been put under pressure by Crawford for eighth from the start of the race. Taking advantage of the slipstream along the main straight, the PREMA driver attempted to slip past him into Turn 1, but the Colombian driver showed him the door.

Leclerc’s quest to move up into the points wasn’t going as easily as planned from P20. By the end of the penultimate lap, the Monegasque driver had moved up to P14 and set out to get past Colapinto. Unfortunately, the Van Amersfoort Racing driver had the same idea and tried a move of his own on Alexander Smolyar, whose shaky defence allowed both drivers to get the jump, with Leclerc moving ahead of the Argentine in the process.

As the chequered flag was waved, it was Collet who was in a league of his own, taking the victory four seconds clear of Correa and O’Sullivan and snatching the point for fastest lap along the way. Edgar finished in fourth as Saucy and Martins ensured all three ART cars finished inside the points, with Hadjar’s Hitech Grand Prix car splitting the two teammates. Montoya, Crawford and Stanek rounded out the top 10, as Bearman and Leclerc were forced to settle for no points in 11th and 12th respectively.