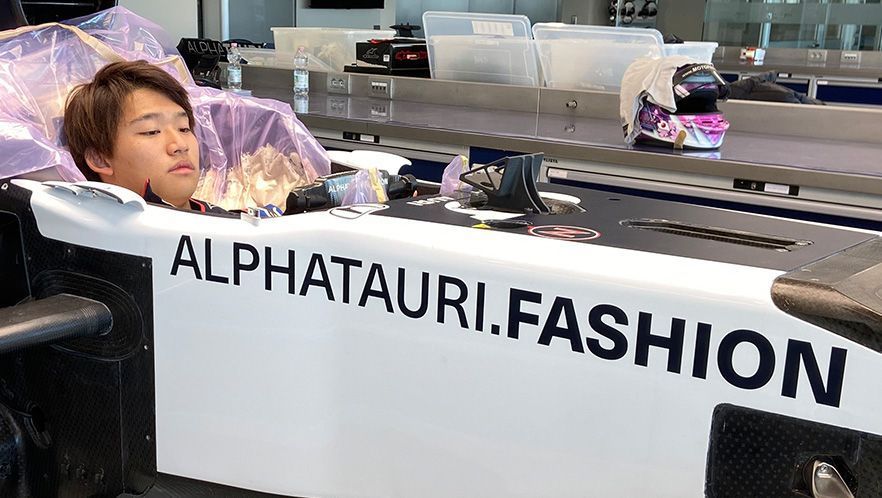 After a parodical introduction stating the show had changed its name to ‘Perez Nation’ in the wake of the Mexican’s Sakhir GP win, the episode got underway with comments on the packed F1 news cycle, injected with life last week by the news of Lewis Hamilton getting COVID-19.

Alex Jacques, a co-host of the show alongside Tom Clarkson, shared his thoughts on George Russell’s “sensational” weekend, during which he narrowly missed out on a maiden victory in highly unusual circumstances. Clarkson followed suit, taking note of the young driver’s remarkable overtake on Valtteri Bottas around the outside late in the race.

Having both evaluated the underwhelming performance of Bottas, Clarkson and Jacques then began conversation on Mercedes’ next steps, with the latter suggesting that the Finn should be replaced, warning that keeping the Finn in the car “wouldn’t do Hamilton any favors,” similarly to how he feels Kimi Raikkonen’s extended time at Ferrari hurt Sebastian Vettel.

Despite comments from Mercedes boss Toto Wolff downplaying the odds of a F1 2021 driver swap, Clarkson added that such a switch would be possible, as he feels was proven by Mercedes’ ability to “extricate” him from the team for one race.

After Jacques praised Russell’s communication skills, and further discussion on whether or not Hamilton’s deal with Mercedes will be negatively affected by the 22-year-old’s performance, Mercedes’ Andrew Shovlin once more joined the show to discuss the team’s lost race victory with Russell in Sakhir.

Shovlin discussed the rationale behind pitting both cars in what would be a disastrous pit stop under the Safety Car, and explained that a radio issue – caused by an issue in message prioritization software – only allowed half of the garage to hear the message addressing the double-stacked stop. He says this led to their issues in the pits.

The Trackside Engineering Director explains that half of Bottas’ tyres were fitted to Russell’s car, after denying that the team regrets pitting both cars, saying that as an F1 team, they cannot have a distrust in pit stops – even with their air-tight attitude in other areas.

Shovlin revealed went on to chat about Russell’s puncture, and explains that the team took a lap to evaluate the deflation, which was of approximately 1.5 psi. Following this, he spoke on the difficulty of getting the Williams F1 driver into the car comfortably, with his height presenting challenges.

After this came a review of Perez’s superb drive, which saw him go from last at the end of the first lap, to first at the end of the race. Upon the end of this review segment, which featured audio of the Mexican describing his race, discussion ensued on whether or not the Mexican can now get a drive at Red Bull, with both agreeing that this is a likelihood, and even a necessity if the team hope to become a WCC contender.

Shortly thereafter, hall of fame F1 journalist David Tremayne joined the episode, beginning a reflection of 2020 with discussion of Romain Grosjean’s enormous crash at Bahrain, which he says he assumed would result in “another obituary.” Subsequently, he discussed the infection of Hamilton with COVID-19, and how he had wished Russell would fill the seat.

After promising honesty in his review of the Sakhir GP, Tremayne said he was wildly impressed – yet not surprised – by the young driver’s performance, which he likened to performances of the past, like with Max Verstappen at Barcelona in 2016. He added that the race felt, in its early stages, “too good to be true.” After his monologue completed, a lengthy outro saw out the end of the penultimate episode of the year.

Here is the link to the podcast as FOM prohibits embedding: https://podcasts.google.com/feed/aHR0cHM6Ly9hdWRpb2Jvb20uY29tL2NoYW5uZWxzLzUwMjQzOTYucnNz/episode/dGFnOmF1ZGlvYm9vbS5jb20sMjAyMC0xMi0wODovcG9zdHMvNzc0NjAyOQ?hl=en-IN&ved=2ahUKEwihsrC0zsDtAhVZwjgGHbE6Bk4QieUEegQIBRAF&ep=6

Here’s F1 Beyond The Grid Podcast having Lance Stroll

Post the confirmation of Yuki Tsunoda, AlphaTauri has now confirmed F2 racer, Sato, as its second driver to be testing in the Young Drivers’ test on December 15, thereby making it an all-Japanese line-up. It will be his first time in a F1 car next week.

“I am extremely happy to be given this opportunity from AlphaTauri to drive an F1 car,” said the 2019 Euroformula Open champion. “We will try to do as many laps as possible to get used to the car quickly and to learn maximum out of it for whatever it comes in futures.

“Obviously to be driving an F1 car is the dream of every racing driver, for sure I will enjoy a lot around Abu Dhabi,” summed up Sato, who raced for Trident in his rookie F2 season. Team boss Franz Tost added: “We are pleased to have Marino Sato on board for the test because he did a solid job throughout the season in F2 this year, so he deserves a run in F1.

“We are convinced he can do a good job as he is a skilled driver. The plan for the test is simple, getting him to do as many laps as possible to give him a good feeling for an F1 car. This test will be very useful, both for us and for Marino and we will do our best to help him understand how an F1 team operates in all its different aspects.

“In addition, from a technical point of view he will certainly learn something from which he will benefit next year, when he will continue in the F2 Championship. I think this is a very good preparation for his future and it’s a pleasure to be part of his development towards what we hope will be a very successful career.”

Haas were forced to release a statement on Mazepin’s behaviour where he posted a close to being an adult video on his Instagram account under Stories – deleted straightaway. The to-be F1 driver also apologised for his actions.

The video was barely a minute, showed only a girl with the assumption that Mazepin was shooting it, inside a car. FormulaRapida.net did not see the video at that moment but it has been since uploaded on Reddit channel (we are not going to post the link here).

Following a furor on social media, where there is even a petition of not allowing Mazepin to race in F1, Haas released a statement, noting that the matter will be handled internally, with no comments to be made further on the topic.

The statement from Haas stated: “Haas F1 Team does not condone the behavior of Nikita Mazepin in the video recently posted on his social media. Additionally, the very fact that the video was posted on social media is also abhorrent to Haas F1 Team. The matter is being dealt with internally and no further comment shall be made at this time.”

The girl in the video clarified the matter: 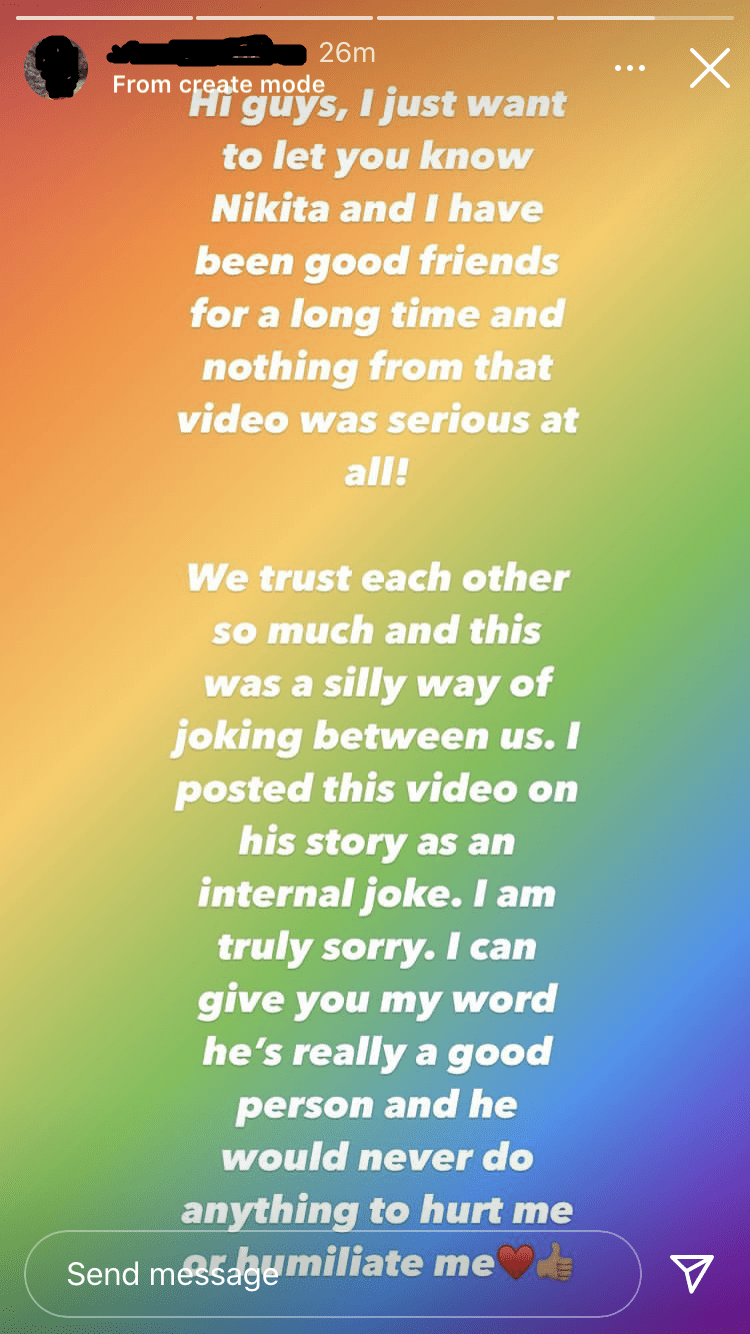