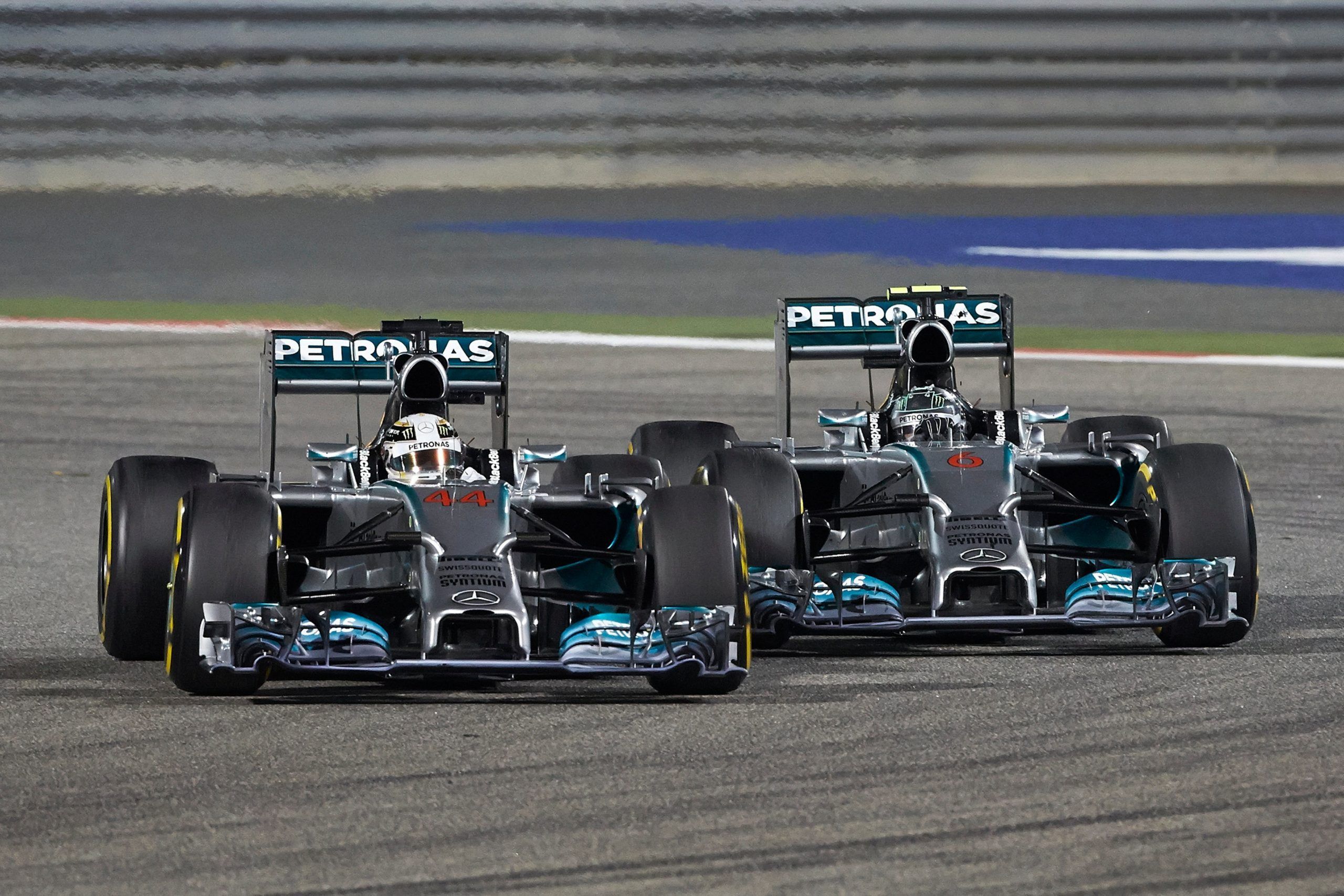 The COVID-19 pandemic has allowed us time to go back in the history and find some of the best duels we have seen on track among some of the greats in F1.

This is the fourth of the four-part series FormulaRapida.net is to put out in this month dubbed as ‘F1 Duels’. After showcasing 10 of the best from the 1950-1980s period, we have truncated the list to just five as we go decade by decade now.

The 2010s was mainly dominated by Sebastian Vettel and then Lewis Hamilton. This was the only decade in F1 where Ferrari didn’t win a single championship, albeit being very close with Fernando Alonso in 2012. This decade also saw the comeback of the one of the most successful drivers, Michael Schumacher.

The 2010s was also a pivotal decade for the sport as we ditched the V8s for the more economical and much quieter V6-hybrid engines, which came into being from 2014 onward as Mercedes kick-started to dominate, with titles every year since then.

Meanwhile, the decade also saw Alonso and Jenson Button, both respected world champions, left the sport while future talents like Max Verstappen and Charles Leclerc made their mark by winning races within two years of entering the sport.

Here’s the list from the 1990s decade if you missed: https://formularapida.net/f1-duels-five-of-the-best-ones-from-the-1990s-decade/

Here’s the list from 2000s decade if you missed: https://formularapida.net/f1-duels-five-of-the-best-ones-from-the-2000s-decade/

So to bring some of that glory back, here are 5 of the best F1 driver battles from 2010s – we will go from fifth to first in the countdown:

In a grand prix where Mercedes’ Lewis Hamilton, after having his own scrap with Valtteri Bottas, won the race for a record sixth time, the battle between Ferrari’s Charles Leclerc and Red Bull’s Max Verstappen was really great to watch.

In the early stages of the 2019 British GP at Silverstone, Leclerc was ahead of Verstappen but the Monegasque was struggling for traction out of the corners which allowed the Dutchman to have a go for many laps but the Ferrari driver maintained his ground.

After the first round of pit-stops however, the battle got heated very quickly. Verstappen and Leclerc went wheel-to-wheel in the pits with the former just edging the latter out by a metre or so. A mistake by the Red Bull driver meant that the Ferrari racer was allowed to overtake him again.

They continued to swap positions and on Lap 24 they again went wheel-to-wheel and even touched wheels, forcing Verstappen off the track. The Dutchman’s hard work was undone as a collision with Sebastian Vettel meant that he spun off and ended up coming home in fifth – just eight seconds behind Leclerc, who finished in 3rd.

The seventh round of the 2013 F1 season was the 50th running of the Canadian GP at Montreal. This race on the North American circuit was also the first win for Red Bull at the track, with Vettel adding yet another win to his tally, that time.

With only a few laps remaining, Ferrari’s Fernando Alonso was chasing down second place man Hamilton. The Spaniard put a lot of pressure on the Mercedes driver as he got close to him lap-by-lap. Going into the hairpin on Lap 62, Alonso tried to go around the outside of the Brit, however, Hamilton defended the inside and maintained second place.

Coming out of the Wall of Champions, Alonso had a great run on Hamilton and had enough speed to make the pass before Turn 1 and end up second behind Vettel – some 14 seconds behind – as Hamilton had to settle for third.

The 2013 Malaysian GP at Sepang circuit is well known for a particular incident that occurred in the later stages of the race with the phrase ‘Multi 21’. This of course was probably the most controversial team order situation since the 2001 Austrian GP.

Vettel ignored a team order from Red Bull to remain in second position behind his teammate but he readily overtook Webber for the lead on Lap 46. They went wheel-to-wheel many times before the overtake which left the Australian confused.

He did not understand as to why the German was not complying with the instructions given to him by his engineer. While Webber kept the word, Vettel, eventually went on to win the race, which was his first of the season, as an awkward podium celebrations followed.

Webber was understandably frustrated at the Germans decision to disobey team orders and the relationship between the two remained sour until the end of the season, when the Australian announced he would be leaving the sport after the season finale in Brazil.

Now this was a fight. Michael Schumacher returned to F1 after retiring from the sport, driving for Mercedes, a new team who had taken over from Brawn GP at the end of 2009. Hamilton, who later replaced Schumacher at the team, was overtaken by the German on the long Monza straight.

But Hamilton kept tabs with the Mercedes driver in his McLaren, staying within his DRS range. The duo exchanged places for few laps as it counts for only one of the few battles between the two F1 legends. Hamilton, eventually, beat Schumacher to end up fourth with the German in fifth after losing steam.

What else would’ve been number one on this list? This classic battle is no doubt one of the best on-track battles we have seen in recent years. The 2014 Bahrain GP at Sakhir circuit was the 900th F1 championship race and was the site of the fiercest duel between Mercedes drivers and old friends, Nico Rosberg and Hamilton.

The scene was set under the spotlights at a rather packed Bahrain GP in which Rosberg had beat Hamilton to pole by just 0.3 seconds. The Brit then made up for this after beating the German off the line and led into Turn 1. On Lap 18, Rosberg made his first move but Hamilton had the German covered but he was overtaken again in few corners later.

They went wheel-to-wheel for multiple times after this and provided quite a showdown for the fans. In the end, Hamilton saw it through and won the race, his second consecutive victory of the season, his first in Bahrain. Rosberg, meanwhile, finished just over a second behind the Brit and said that it was “the biggest battle I ever had and it was also the toughest loss ever”.

Some honourable mentions which missed the cut:

Like the 2000s honourable list, the 2010s era had more wheel-to-wheel F1 Duels. The first in this list takes us to the Azerbaijan GP in 2018, where we witnessed the two Red Bull racers Daniel Ricciardo and Verstappen have a go at each other.

We all know how this one ended. It got pretty heated as the race pushed on as they swapped positions multiple times. It eventually led to a controversial collision between the two on Lap 40, in a grand prix, where the duo looked good to challenge their rivals.

For the next one, we have Vettel going against Hamilton in 2010 Chinese GP at Shanghai International Circuit. Post the Rosberg and Hamilton saga, the fight between the Brit and Vettel has been the most prominent rivalry in the last five years in F1.

They have 10 world championships and 137 race wins between them. Their battle at the Shanghai circuit shows you how good they are at close proximity racing. The slippery conditions did catch many out as Vettel went wheel-to-wheel with Hamilton in the pitlane.

The German in his Red Bull started on pole but was pushed back due to penalty and despite the heroics, could only manage sixth, while Hamilton was up ahead in second to be part of a McLaren 1-2, where Jenson Button took the win.

And finally, we have Alonso up against Vettel in 2014 British GP at Silverstone, where the duo went wheel-to-wheel as the German in his Red Bull tried to get the better of the Spaniard in the Ferrari. With just five laps remaining, Vettel tried his luck in taking fifth place from the Spaniard as he fought incredibly hard to take it.

Vettel left no space for Alonso before he went down the inside of the Ferrari driver at Copse to make the move stick as the German then soldiered on and managed to keep a raging Alonso behind him, with them ending up fifth and sixth respectively.

That’s the end of our F1 Duels segment – hope you have enjoyed it. But before that let us know some of your favorite on-track driver battles in the comments section from the 2010s era – if we get some good ones, we may do a special fan list.