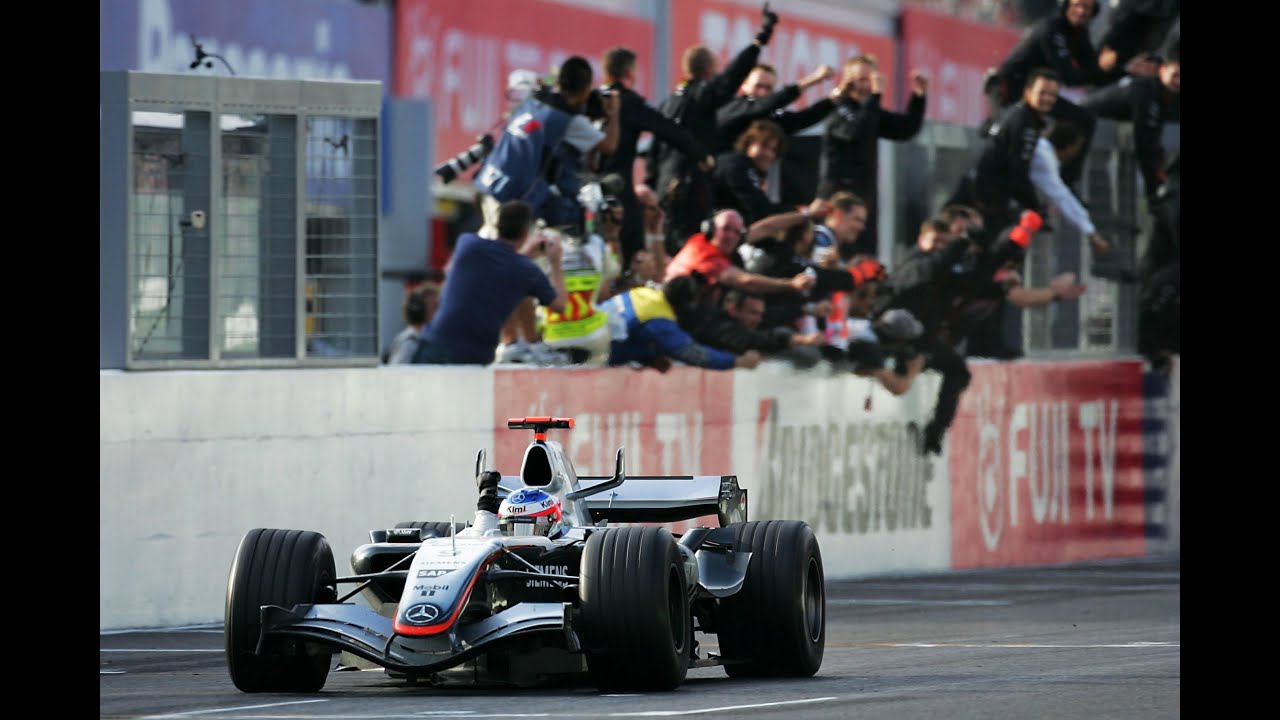 The COVID-19 pandemic has allowed us time to go back in the history and find some of the best duels we have seen on track among some of the greats in F1.

This is the third of the four-part series FormulaRapida.net is to put out in this month dubbed as ‘F1 Duels’. After showcasing 10 of the best from the 1950-1980s period, we have truncated the list to just five as we go decade by decade now.

The 2000s was a wonderful decade for F1 with five world champions crowned. Truly, Michael Schumacher was dominant of lot, winning four driver championships with Ferrari in this decade, he made history with seven in all, which stands as a record till date.

The 2000s also saw the debut of some of the sports greatest drivers of current times like Fernando Alonso, Jenson Button, Lewis Hamilton, Sebastian Vettel and Kimi Raikkonen. They have had some fantastic battles all-through the 10 years.

Here’s the list from the 1990s decade if you missed: https://formularapida.net/f1-duels-five-of-the-best-ones-from-the-1990s-decade/

So to bring some of that glory back, here are 5 of the best F1 driver battles from 2000s – we will go from fifth to first in the countdown:

In a race where Aussie Mark Webber would score his first ever points finish and a huge crash between Ralf Schumacher and pole-sitter Rubens Barichello would take place at the first corner of lap one, the 2002 Australian GP at Albert Park was not short of surprises.

A battle developed between Renault’s Trulli, Williams’ Montoya and Ferrari’s Schumacher. At the start, the Italian and the German were fighting for second position as David Coulthard led the way in his McLaren.

On Lap 7, Schumacher got a run on Trulli as he went down the inside of the Italian driver, but Trulli then cut him off allowing Montya to be within overtaking distance of the German. The Renault driver’s hard work was then undone as he spun a few laps later.

The battle between Schumacher and Montoya, though, lasted many laps as they went wheel-to-wheel, constantly swapping positions. The race ended with Schumacher scoring the win handsomely, with Montoya ending up in second.

We can say that 2007 was a really special year for F1. Not only did we see a season without legend Schumacher, we witnessed Raikkonen seal the drivers’ championship – the last for Ferrari till now – by just one point from McLaren’s Hamilton.

In the 2007 Japanese GP at Fuji, BMW Sauber’s Kubica found himself battling Ferrari’s Felipe Massa for sixth. It was really tough for the Polish driver to keep the Brazilian behind him as the wet conditions made it very difficult to drive around an 18-corner track.

On the final lap, Massa was determined to get past the Polish racer in his slower BMW Sauber and halfway through Lap 63, the Brazilian dived down the inside of Kubica. The wet surface helped the Polish driver to find traction and quickly re-gain the lost place.

The pair then went on to have a spectacular corner-to-corner battle with both of them being forced off track even. The duel ended at the last few corners where Kubica went wide and never recovered – leaving Massa to sweep up sixth place from the Pole.

Button is arguably one of the most likable guys in recent F1 history. With 206 Grand Prix starts under his belt, he certainly has had his fair share of wheel-to-wheel action. The 2004 German GP was no exception at the Hockenheim circuit.

In the season where Schumacher would win his seventh and last word championship, things got pretty interesting all over the field. Button, in his fifth season, found himself battling Renault’s Alonso for second position in his BAR-Honda.

With 32 laps to go, Button pitted for fresh tyres and fuel, as he ventured out just behind Alonso. He slip-streamed the Spaniard for a few laps and went wheel-to-wheel on the long straight and through the following high-speed corners.

Some 16 laps later, the Honda driver pitted again to be behind Alonso. It was a straight dash for the line after the second stop. The Brit made another attempt, dived down the inside of Alonso and managed to secure second place with the Spaniard in third.

In 2008, we saw Hamilton take his first of many F1 world drivers’ titles and we also saw a rather tight championship battle develop between the McLaren and Ferrari drivers. Although the rivalry between McLaren teammates Hamilton and Alonso was fierce, the battles the Brit had with Ferrari’s Kimi Raikkonen were also very tense.

One of their most grittiest battles was in 2008 Belgian GP at Spa-Francorchamps. Hamilton had cut the Bus Stop chicane in order to overtake Raikkonen but the Finn wasn’t going down without a fight. The pair fought considerably hard for first place and rightly so.

From slip-streaming on the Kemmel Straight to dive bombing at any opportunity possible, this battle brings out the best on F1 duels. In the closing stages, Hamilton went onto the grass, seemingly handing Raikkonen the lead but not for long.

Just as soon as the Brit re-joined the track, Raikkonen spun, giving the position back to Hamilton. Just after passing Blanchimont, the Finn lost the rear end of his Ferrari and smashed the front end of his car, leaving Hamilton to take the win.

After the race, however, Hamilton was disqualified as the corner he cut amid his battle with Raikkonen was deemed as an unfair advantage. This meant that Ferrari’s Massa was declared as the overall race winner.

The 2005 Japanese GP at Suzuka was an absolute gem to watch. Raikkonen didn’t have the best of races as he qualified 17th, a whole 16 seconds slower than Ralf Schumacher’s pole time of 1m46.106s. Meanwhile, the typical front-runners qualified further down the grid.

The start of the race was good for Raikkonen, he gained a few positions and seemed to be very comfortable in his McLaren. Running on heavy fuel, the Finn still managed to reign in Ferrari’s Michael Schumacher and had had a scrap for a couple of laps before their pitstops.

Both re-joined the track ahead of Coulthard and Alonso. Few laps later Raikkonen passed Schumacher and closed in on Button and Webber – who he also overtook. The Finn could smell the taste of victory and became more and more confident in the ability of his car.

At one stage, Renault’s Giancarlo Fisichella seemed destined to win but he was aware of the rapidly decreasing gap between him and Raikkonen. On the last lap, the Finn passed the Italian around the outside of Turn 1 and went on to register an epic win. This was, in fact, Raikkonen’s last F1 race win for McLaren and was one of the most memorable of the Finn’s 21 race victories.

Some honourable mentions which missed the cut:

Unlike the 1990s decade, the 2000s had more wheel-to-wheel F1 duels and so, the list of mentions is bigger than the last. First up we have a fight between Raikkonen, Schumacher and Montoya in the 2002 French GP at Circuit Paul Ricard.

It was a close fight with Montoya kick-starting the push on Lap 3 by diving down the inside of Schumacher but the Williams BMW driver faded away in the latter part to be fourth, while Schumacher fended off Raikkonen to secure the win.

The fight between Trulli and Olivier Panis in 2001 German GP at Hockenheim in a race where only 10 drivers were classified finishers drivers saw BAR-Honda’s Panis challenge Jordan’s Trulli in the opening stages in tricky conditions.

Panis was stuck behind the yellow Jordan for a while, but a move round the outside of the Italian meant that he got past. Trulli was spun around just after the overtake as he eventually retired on Lap 34, while Panis ended up seventh.

Moving on, the intense duel between Schumacher and Coulthard in 2000 US GP at Indianapolis Motor Speedway is one to remember as well. They went wheel-to-wheel and even touched wheels but the German prevailed in his Ferrari to win, leaving Coulthard only fifth in his McLaren.

And finally, the 2006 Bahrain GP was a stunning race where we saw Renault’s Alonso go up against Ferrari’s Schumacher. The German was closely followed by the Spaniard, who managed to get the race lead after the second pit-stop.

Schumacher didn’t let go as he went on to put a lot of pressure on the Spaniard in the fight for the race victory but it was hard done as Alonso took home the win with just over a second separating himself from the German driver.

Next up will be the Top 5 F1 duels which took place between 2010 and 2019. But before that let us know some of your favorite on-track driver battles in the comments section from the 2000s era – if we get some good ones, we may do a special fan list.